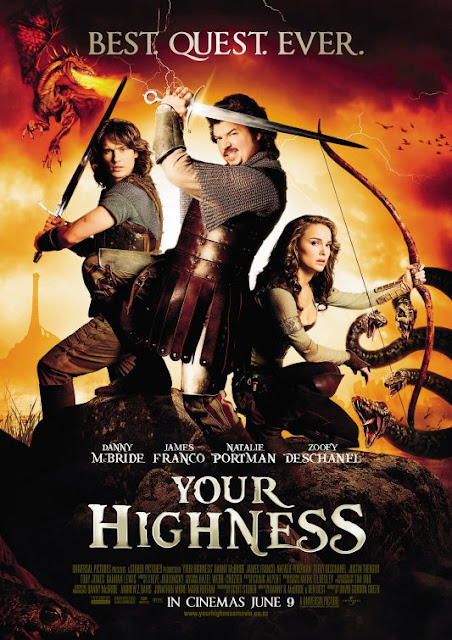 One of the things I've learned from my time studying trailers is that you can always be surprised. You one day see a trailer pop up for a movie you know absolutely nothing about but by the end of said trailer you are now excited for the film. Your Highness was one of those films. Written by the team behind Eastbound & Down, a show I'm quite fond of, and directed by David Gordon Green, of Pineapple Express fame, this comedy seemed like a great mix of medieval dungeons and dragons and raunchy stoner humor that we get in most comedies nowadays. An American 21st century Holy Grail if you will. And as time went on I got more and more excited for it. Never most anticipated level but definitely a "will check out when it comes out" level of excitement. Then the film was released...

And it sucked. It had it's funny moments, there was no doubt about that, and Franco/McBride make for a pretty funny brother combination but overall the film was just lacking both in humor and direction. 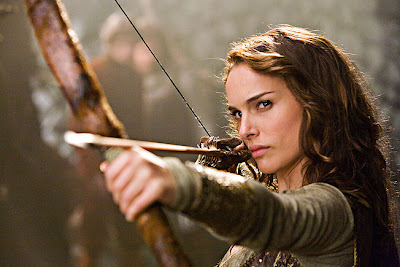 The film follows Prince Thadeous (Danny McBride), an arrogant, unlikeable man who spends most of his time fornicating, getting high, and raising hell, all with his trusty sidekick/lackey Courtney following closely behind. His brother Prince Fabious (James Franco) is a handsome, lovable man and the heir to the throne. He's battle tested, a mighty warrior and has just returned from his latest quest with a new addition to the family, Belladonna (Zooey Deschanel) the naive virgin who shall become Fabious bride. At the wedding Leezar, an evil wizard, comes and steals Belladonna with the intention of fulfilling a prophecy by the end of the week. Fabious and his crew venture off to go rescue her and kill Leezar and bring Thadeous and Courtney along because if they don't go Thadeous will no longer be a Prince. On their way they meet a warrior princess Isabel (Natalie Portman) who happens to have the same quest as them.

On paper the basic outline of the film seems to work. It's been done before in many different stories but that's never stopped Hollywood before. The problem is the film's writing is almost entirely an outline. According to Green the script is just an outline and the dialogue is entirely improvised. And unlike Uwe Boll's last couple of films (which have been pretty good actually) in Your Highness you can REALLY tell they are improvising. Whether it's scenes full of rambling nonsense or Danny McBride making up stuff as he goes along (just watch the opening credits and you'll know what I mean) the film lacks a coherent plot and any direction whatsoever. The basic goal is there but the getting there seems to prove more difficult for the writers than it does the characters. 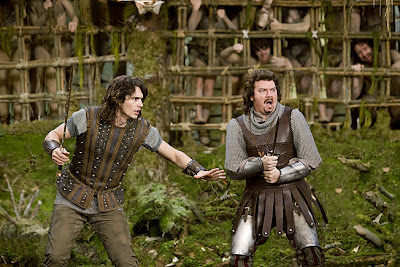 One place the writing really falls short and seems uneven is in the comedy. One minute you'll hear a joke that is genuinely laugh out loud funny but then it will be 5-7 minutes before you get even a chuckle or a grin in this film. It tries to make up for the lack of jokes by inserting a ton of language and while I'm the furthest from a language snob, using just the swear word as a punch line and expecting it to be funny doesn't work. This problem is exasperated when one of your characters basically drops an F bomb nearly every other sentence and thus makes any swear word seem like nothing.

The acting is also all over the place as well. Danny McBride plays Danny McBride and if you like that then you're in for a treat. I don't mind him, as I'm a fan of Eastbound & Down, but he does get annoying at times. James Franco is good but doesn't really get to stretch any serious acting chops, even when the movie is being serious. Natalie Portman and Zooey Deschanel are basically just archetype "warrior princess" and "princess" characters so they don't really get to shine and feel transparent throughout the film. The one standout for me actually was Rasmus Hardiker who played Courtney. His sadsack, weakling, lackey character was very well done and his dry, ironic wit really got some of the biggest laughs out of me. He reminded me a lot of Patsy from the Holy Grail. 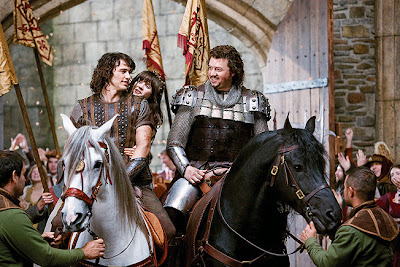 Overall Your Highness isn't a total failure of a movie but it does have its good share of problems. The writing is uneven, the characters are undeveloped and poorly acted (save for one), the story lacks focus and direction, the humor is hit and miss (but can hit harder at times) and feels a little too long. But if you go in with low expectations you might not hate it but I find it hard to really recommend this film.