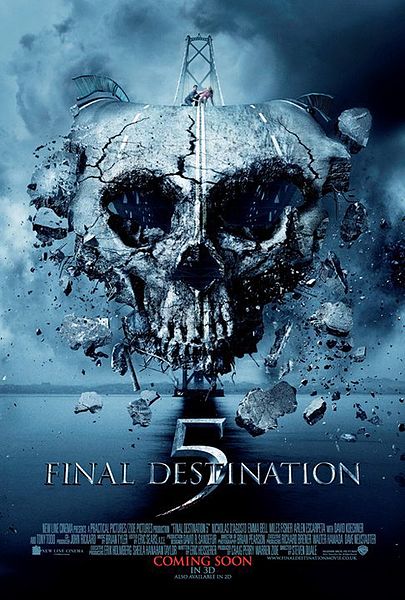 The Final Destination series and I have had a long, twisted relationship. The original one was one of the first horror (as well as R rated) films I ever saw. Even though I winced at a few of the deaths, I knew I had watched a classic and to this day the original remains one of my favorite horror films. Then the second one came out and when it was released on video I watched it and while I enjoyed it at first, upon repeat viewings I found myself liking it less and less. Yes the pile-up is cool and some of the deaths are ingenious. Yes it's nice that there is such a huge callback to the original one but it seemed almost inadvertently comical and too over the top for me to fully embrace. I will still watch it when it pops up on TV every now and again, but I'd rather just dust off the original and watch that instead.

Then the third one came out. That's when I started to realize something that every kid in the 80s who grew up with Freddy and Jason realized: it doesn't matter how much effort you put into your slasher film, if your kills are cool, people will come. The third one boasted some of the best deaths but as a film itself it lacked greatly. It was gory to the point of being cheesy, the characters were mind blowingly thin at best and besides maybe Mary Elizabeth Winstead's character, I could have cared less if they all died. Not to mention the writing was more hammy then a Christmas dinner. 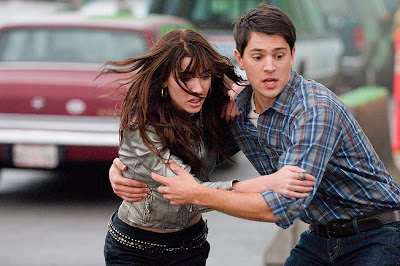 Then The Final Destination came out (because in 2008 all sequels needed a "The" at the beginning to confuse people) and boy was I pissed. It was the first one I could actually go and see in the theaters and also the first one to embrace the then still growing 3D market. And I did see it, in 3D no less and afterwards I just sat there dumbfounded as to how a film series I grew up and appreciated could go from brilliant to garbage in the span of four movies. I mean the novels were pretty good and well written, why not just adapt those? Is it really that hard to make a good Final Destination. It's not that the death's were bad in TFD, it's just sad when your movie's best moment involves guts going through the pooper and into the drain. The writing was worse than the third one and really the film was just death after death after death. I don't care how many people you kill, just give me a good movie. Is it too much to ask?

I figured they would release the fifth one eventually and when I heard the news I was anything but surprised. Before I saw the trailer I thought "How can you dig the series into an even deeper hole?" and sighed as I clicked play. After the trailer I was shaking with excitement. Fifth films are just in this year it seems. They got a totally new director, some decent but fairly unknown actors and a writer who has gotten better the more work he's done (after TFD he wrote the Nightmare on Elm Street remake). Not only that but it seemed like they put more effort into the film, not in just the deaths but in the story line and character development. That and they brought back Tony Todd. Any movie with Tony Todd is automatically made better. For once I was genuinely excited for a Final Destination film.

So how was it? Well I'll tell ya: it's the best sequel of the bunch and is a close contender for the best in the series. It does have it's shortcomings and an Oscar movie FD5 is not, but for what it is it is amazing.

The story follows Sam (Nicholas D'Agosto), an office worker at a paper company (insert The Office joke here) who works part time as a short order cook with hopes of someday becoming a renowned chef like his boss. He gets offered an apprenticeship in Paris and this causes his long time girlfriend and fellow employee Molly (Emma Bell) to break up with him because she doesn't want to get in the way of his career. Sam is devastated but doesn't have time to sulk as his buddies Peter (Miles Fischer) and Nathan (Arlen Escarpeta), along with his demanding and rude boss Dennis (David Koechner), office womanizer and all around creeper Issac (PJ Byrne), fellow employee Olivia (Jacqueline MacInnes Wood) and intern Candice (Ellen Wroe) all pile on a bus heading for a mandatory office retreat. While on the bus they stop at a bridge that's getting construction done and Sam has a premonition that the bridge will collapse and they will all die. And like all the previous films before it, he freaks out and convinces people to get off the bus before the bridge does in fact collapse.

You can probably guess from there how the rest of the film goes but unlike the other entries in the series, they put a lot of detail into the storyline of the individual characters. Sam dealing with his break-up with Molly, Molly trying to figure out her feelings for Sam, Nathan dealing with an employee who gives him constant crap ect. You feel like you get to know most of  the characters as the film goes on. You care about these people. Adding in the elements of "Kill or be Killed" and bringing back the Police/Feds investigating the bridge and subsequent deaths also add to the story. My only gripe is that some of the dialogue can be a bit heavy handed in it's delivery or come off as unnatural. Also the "Kill or be Killed" element is there but I felt it could have been better explained or have more depth. It feels slightly like an afterthought. I appreciate it being there, but still. I will say though that the film has one big twist in it that more than makes up for some of the writings downfall. It's damn near Hitchcockian it's so well done.

As for the acting it's quite good actually. D'Agosto, Bell and Fischer are all quite good and bring a lot of emotional depth and character to their roles, Fischer especially. Koechner and Byrne are mostly there for comic relief but they don't feel forced and actually DO generate some pretty funny lines. Escarpeta, Wood and Wroe all have smaller parts but play their parts well despite their size and all feel believable as their characters. The acting certainly isn't Oscar quality but it's well done and I appreciate horror films with good acting in them.

Now onto the deaths and the 3D effects. That's what a lot of the people who see the movie really care about. Well  I can tell you the 3D effects are some of the best I've seen in a long time (no wonder since the film was SHOT in 3D and was directed by one of the people who worked on Avatar) and really do add a lot to the film without feeling gimmicky. The deaths are phenomenal in their build up to the money shot but some of the kills themselves leave a little to be desired. That said they do a good job at being not overly gory and some of  them actually feel like they could really happen. Sure some laws of physics and other rules may not apply but they feel more down to earth than before. The 3D is best utilized in these scenes too. Blood flies, hints and clues accentuate and the red herrings always stick out enough that they make you uncomfortable.

There is only one problem with the 3D and it's my only serious gripe with the film: the opening credits. They are done in a way in which a glass pane shatters with every name and it's shattered by a corresponding death from the series. The glass and the object then shoot out at the audience. Now it's cool at first and it's fun to point out some of your favorite deaths as they come at you, but they are dragged out way too long and by the end you feel like you just sat through the opening crawl to Alone in the Dark. Yes, they are that slow. But in a weird twist however, the ending credits are some of the best 3D end credits I've seen in a while and are a great nod to the fans as well. Makes me kind of wish they would have switched them. Oh well.

Overall Final Destination 5 is a great entry in the long running series and is certainly the best sequel if not a close contender for best. Not only that but it's a good horror film in it's own right, is well acted, written and shot. I really do want to see this film again. And I want to buy it when it is released in stores. I haven't had the urge to do anything remotely close to that since the original, so that should tell you something. If you love horror or love the series than check this out.