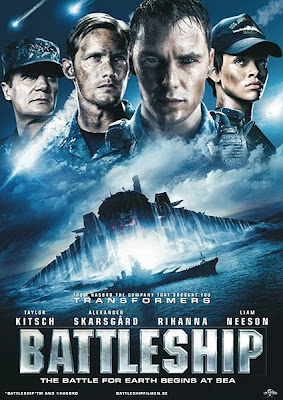 Hello I am the movie encyclopedia and if no one else will see it, I will

I often wonder how some movies get green-lit in Hollywood nowadays. I can understand wanting to adapt a novel, a video game or a comic into a film because it comes with an inherent fan base that will want to see their favorite characters put onto the screen. Sometimes it works (The Dark Knight) and sometimes it doesn't (The Spirit), but it will make money no matter what. Then there's Battleship, based on the best-selling board game that has graced our kitchen tables for over 40 years. Who thought this would be a good idea? Board games don't really come jam-packed with stories or characters and have rarely ever seemed like a good idea for films. The 1980s classic Clue worked because it had something to go on, but Battleship is just two people trying to guess where the other person's boats are. But Hasbro, Universal and Peter Berg obviously saw something since here we are with a Battleship movie.