Human perfection. What could go wrong? 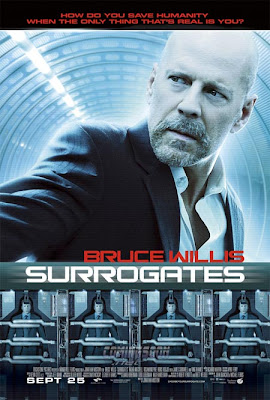 Greetings and welcome, I'm the movie encyclopedia and if no one else will watch it, I will.

Let me give you some backround. Early in his life Robert Venditti was working at Borders. He had a notion that he would become the next Hemmingway. He had an idea that he would become a great author. But after being peskered by a customer he read the comic Astro City. After that he decided a career in comics. In 2002 he was working at Top Shelf Productions as a box boy. At the end of 2002 he submitted his first and most noticable piece of work known as The Surrogates. Top Shelf took a look at it and decided to publish it. It was officially released in 2005 and became a pretty big hit. So much so that in July of this year he made a prequel that described how the whole surrogacy thing came to be. You can now find both graphic novels bound together at any bookstore.

In 2007 Disney claimed the rights to The Surrogates and decided to turn it into a film, under Touchstone Pictures. They attached Jonathan Mostow (director of U-571 and the third Terminator film) and assigned Bruce Willis to play the lead role. In 2008 they began filming and it was released today in theatres everywhere.

Surrogates (the film as well as the comic) is based around the idea of being so addicted to the internet and your internet personas (cough) that you start to live your life as that and not as a real person. From that idea stemmed the comic and film. Surrogates are a robot remotely controlled through neurological pulses that can live your life without you having to leave your home. You dont need to eat, sleep, anything. You can be who you want or what you want. And you cant die. You can be destroyed but all you have to do is unplug and get a new one. Cripples can walk, the deaf can hear and the blind can see. Nobody gets killed in wars (we're still in Iraq apparently according to the movie). Crime is down 99% and racism is now a myth. Its the perfect human society right? Well there is a small group of humans known as Dreads who believe that you should live your life with what you have and when you die, its all okay, you are going to heaven. They think Surrogacy is an abomination. So they were designated there own areas where its humans only. So everyone could (essentially) live in peace.

You know whats the most interesting thing about this movie? It has a distinct possibility of happening. Think about it. How far are we away nowadays from this kind of scientific and medical discovery? It would do as much bad as it would good. This film makes for a great debate and the story is very descriptive and well thought out. That's what shocked me. The previews made it out to look like a half-assed sci-fi thriller and it turned out to be extremly deep and really thought provoking. Than again, Bruce Willis likes to make movies where you think about it afterwards.

But even with a great story you need strong actors to back it up right? Otherwise its a good story with no reason to watch it. Like if they had gone with the original castings for Watchmen...it wouldnt have been as good. Well for the most part the cast does a decent job. Bruce Willis, the driving force that he is does a great job in this movie. For the first quarter (maybe less) of the film you see a plastic, styalized version of Willis with the most GOD AWFUL DONALD TRUMP TOUPEE EVER, but the film moves so fast and cuts away from him alot that while its agonizing to see at first, it really doesnt become a distraction (like Dr Manhatten in Watchmen). But for the most part in the movie he is an older, pudgier, rugged version of himself. He doesnt look pretty in this movie. He is scarred, bruised, slow and broken and that does wonders for him. You think more about his craft and less about how he looks and his perfomance makes him shine. The rest of the acting however is an extreme case of hit or miss. Its either phenominal or BANG and groan worthy. Luckily the former is more prominant. Greer's (Willis) wife Maggie, played by Rosamand Pike does a really good job. You sense her true dependance on the surrogate as a safety blanket that she wont let go of. She seems a little dead behind the eyes and cold but you see her true self present herself in the movie as well and you really almost feel sorry for her. Like Willis with his looks, you see her true craft come out more BECAUSE she is robotic so her voice and mannurisms and behavior really have to stand out to make you care as much as you do. Agent Peters, played by Radha Mitchell is on the other spectrum. She is dull as a dishwasher and about as interesting as paint. Granted she was in her surrogate form for 99.9 % of her screen time (with one shot of her really thats quite disturbing) that doesnt give you the excuse to act robotic. Unlike Maggie she shows no emotion or true human value. In fact maybe she IS a prototype Surrogate. Her lines are good and she never delivers any big one liners but thats part of it, shes not really given much of a personality or given anything to do. She kind of stands there, prattles on, walks, stops and walks some more. I only saw one millasecond of actual acting out of her and it was for I think comic effect. But it wasnt Razzy worthy and really shes not a big player in the movie.

For me it was surprising to see Ving Rames in the movie. He plays a character known as THE PROPHET who is one of the dreads. He wishes to lead a revolution to get rid of all of the surrogates. But the truly puzzling thing is I cant figure out if he did a good OR a bad job. He doesnt have many lines and honestly looks like a silly Rasta Man but he does have a good prescence of power in the movie and does seem like a Godfather in dreads. But its an unsure one for me.

The most surprisng one for me is James Cromwell. He plays Dr. Cantor in the film. Cantor is the man who invented surrogates. If you havent seen Cromwell before he is a decorated character actor who is great at really getting into his roles. Even at 69 he still does great films. But what makes his part so interesting in the film is that he IS but ISNT. Im not trying to sound weird but he has a very small part in the movie, as himself. He has parts in the intro and has a big reveal at the end and gives a Matrix like Architect feeling and speech and than thats it.

His part is almost identical to his (above) but it also has a great individuality with what he DOESNT DO. Cantor fears showing himself for fear of running the risk of a dread wanting to kill him, so he has many different surrogates that talk for him in all sorts of different shapes and sizes. Even though its not Cromwell, you can sense him through his surrogates. Also with that comes his feeling of prescence in the movie. Even when hes not there you feel him there like hes gonna pop out and say something.

Speaking of popping up, lets talk about the thrills. This is a thriller sci fi if I remember correctly. The thrills are actually genuinely good in this movie. Sure there is the occasional routine pop scare and of course Bruce Willis getting hit by a car/truck/SUV (EVERY MOVIE) but for the most part the tension is REAL and when the characters exhale sharply, you tend to be doing the same. The thrills are well done and accompanied by a great score which only adds to the tenison.

Honestly i was expecting a mediocre RENT IT Sci-Fi thriller and instead what I got was a dark horse for one of the best movies of 2009. If you like deep, thought provoking thrillers than by all means this is your film.