Polar bears cover their noses before they pounce on a seal. How do polar bears know their noses are black? Did they look in the water one day, see the 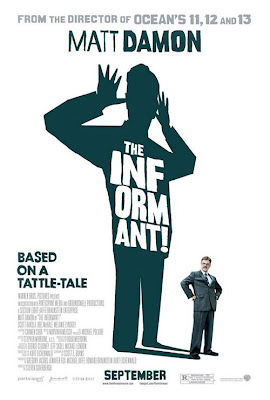 Hi Im the movie encyclopedia and if no one else will see it, I will.

Well in the early 90s there was a scare with a Lysine price fixing conspiracy between ADR and other company's to fix the price of the addictive substance Lysine, found in corn. What followed soon after was an FBI investigation with the help of one Mark Whitacre. Whitacre was the head of the BioProducts division but was brought in to listen in on the price fixing conversations. With his conscience feeling guilty he decided to become an informant, wear a wire and ultimately bring down this conspiracy once and for all. Well the FBI and Whitacre did, and what followed was one of the best documented corporate crimes in Americas history. Even though Whitacre helped he still faced 9 years in jail, more than the executives at ADM. You want to know why? He embezzled, stole, took kickbacks and forged signatures to ultimately earn himself 9 million dollars WHILE working under the FBI. And he lied through his teeth about the whole thing. And when he was caught you know what he blamed it on? Being bipolar...when that didnt work...he was assaulted by the FBI...when that didnt work...he just stopped lying.

Well with this kind of story it was just begging to be made into a movie right? You bet. In fact Whitacre himself was a big fan of the movie and really enjoyed Matt Damon's portrayl of himself. But while most critics including

thought it was a great, funny, witty movie and it made a lot of money at the box office. But for me it just shocked me. And to tell you why lets start with the first problem: Matt Damon. As all of you may now (or now know) I do not like Matt Damon...the actor. He seems like a really great guy with a great personality but he just doesnt show that in his films. Hes good in Good Will Hunting but mostly for the reason that he was just playing himself and he wrote himself a good part. To me he just hasnt made a watchable movie. The Bourne films were decent (if not nauseating from all the camera movement) but Damon really didnt do anything in those movies that any other actor couldnt have done better. "Okay be boring, dry, rude, yell a lot and hit people. GO!" But my hatred for Matt Damon only wants me to want him to be better. If and when he makes a good movie I will applaud him for it, but this is not one of them.
Matt Damon's Whitacre is a very weird, unlikeable, seemingly stupid and boring man whose thoughts buzz through his head quicker than we can process them. He rambles out lines like in the header almost every other minute and most of the time they make no sense whatsoever. Some of them are kind of chuckle worthy and some of them are pretty lame but for the most part they just seem really out of place. Its like they copied and pasted big chunks of thought from the book and forced Damon to say them so it would feel more like the book. I can understand trying to emulate how the book felt but having Damon's voice over the music and action talking about butterflies or polar bears is honestly just really weird. But his thoughts arent the only problem. Damon's other problem is he never feels really comfortable in this movie. He mostly has this sour look on his face like he is bored out of his mind or a really dopey grin. This is a textbook definition of phoning it in. Im sorry people who liked this movie but if you watch this movie and ANY of his other films, it seems like he really doesnt give a crap and decided "Screw it, I gained weight and grew this horrible moustache for this film to LOOK like the character but I refuse to BE the character!"
Along the way the whole bipolar thing comes to play in the film. But it wasnt until they blatently kept reassuring us he was bipolar and he kept saying it until anyone in the theatre knew about it. After the news that he was "bipolar" I thought back through the rest of the movie and there was no sign whatsoever that he was even slightly bipolar. Paranoid and a chronic liar yes...but not bipolar. As much as I hated Observe and Report (darkest most unfunny comedy ever released. A total Paul Blart rip off, except it was badly written and completly unlikeable and as violent as a saw movie) you could at least tell that Seth Rogan was really bipolar. Which is sad if Seth Rogan does better acting than you...thats really saying something.

But maybe the whole thing was a lie. Most of the film is. Thats the most distracting thing about the movie: the lying. Its in ever scene. He does it so much and so often (in between the nonsequitors) that it gets ridiculous. Yes Whitacre lied about stuff but it gets to a point where you are like REALLY? YOU COULDNT HAVE SAID THAT EARLIER. There was only one time when that joke was funny but did they beat it to death because it was one of the few funny things about the movie? SURVEY SAYS: YES! Whenever he says "Well..." or "There is one other thing I forgot to tell you" the whole audience and I all groaned. Its crazy how some movies just get this crazy idea in there head like "Hmm if we do it once and its funny, than if we do it 100 times it will be the funniest movie ever!" Whoever thought of that idea for films should be shot. And I should have gone in the past to shoot myself or the ticket person so that I wouldnt have had to sit through LYING: THE FILM.

But besides Damon there are other actors. Except all the other actors in the movie really dont seem THERE. They seem like they phone it in so that Matt Damon will look better. And what do you get if the entire cast phones it in: A BORING PIECE OF CRAP!
His wife is mousey and quiet and a bit of an unlikeable girl so you dont see her that much. His son only has three lines in the whole movie and two of them are barely audible. The other workers are barely there and for the most part dissolve into nothing more than wasted screen. The big wigs are there but never have a real character or any development whatsoever besides "CORRUPT BUISNESS MAN!" Only Scott Bakula and Joel McHale seem to really stand out as characters and that is because you see them so much. Bakula seems more bored than Damon and they most have who can deliver there lines with the least amount of effort contests while Joel McHale (who is hillarious) really tries to be the straight man tough guy and it doesnt really work for him because he just seems pissed that he is in the movie most of the time.
Oh well its sad. This movie got great reviews and was on my top films I MUST SEE. The Oceans 11, 12, and 13 movies were great films and good ensemble films. They still remain some of my favorites. But I guess you cant always make great movies. And its a shame. The story is really interesting and considering its true it really makes you think about all the big corporations out there and if they are really cheating you out of your cash. And despite some flaws the script is really decently interesting and it should have kept my interest the whole movie. But when you got all the actors phoning it in, not commiting to there part, not caring about the audience and really only caring about the paycheck at the end, it turns an interesting story and script into a boring piece of film with nothing going for it. Maybe with different actors this could have been one of the best films of the year. But with the cast it got it just never clicked for me. This one really makes me sad.
MY VERDICT: AVOID IT
(to add on from the ratings system...I gave this an AVOID IT because its only okay, doesnt keep me interested and it makes me sad because this one had A LOT going for it...but some movies will surprise you)
Posted by xTJMac510x at 12:16 AM