In a world where everyone can tell the truth...this guy can lie 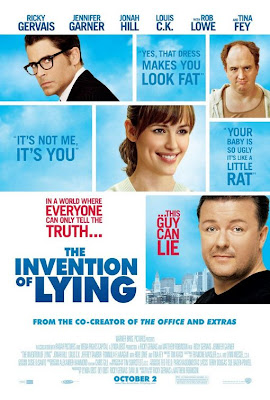 Greetings and Salutations! I am the movie encyclopedia and if no one else will watch it, I will. How many people reading my blog have ever heard of the Office? Not the Steve Carrel remake but the original Emmy Award winning hit show, The Office starring and written by Ricky Gervais? Fine...not a lot of people...How about extras? Or maybe his stand up he did in Grand Theft Auto IV? Either way Ricky Gervais is arguably one of the funniest British people to ever live. Why is that you ask?

Here's a bit of his stand up


If you dont laugh than there is something wrong with you. And I picked this clip in particular for a reason and youll hear it later.

Ricky Gervais has become famous for his great writing, great timing, wit, and dry sense of humor. Last year he released the commercially mediocre but critically loved film Ghost Town. Now he's back with another movie bluntly and descriptively titled THE INVENTION OF LYING. TIOL (The acronym) is about a world in which man has not evolved enough so they have never developed the ability to lie. Everyone tells the truth and blurts out everything without thinking about it. This can be both good and bad for people but its especially hard for Mark. Mark is a screenwriter but more importantly he is fat and ugly. People in this world dont care what you do or who you are as a person. As long as you look good you will get far and ultimatley get married while all the fat people will die lonely. And they tell this to Mark without any hesitation. Its hard being a screenwriter in this world because every "movie" is nothing more than a history report read out loud on a teleprompter. And because of his looks Mark is stuck with the 1300s which was famous for the Black Plague...yay for Mark. Its here that we meet our major players. Jennifer Garner plays Anna McDoogles, a woman who knows her beauty but is quite shallow and extremly blunt. In fact her first sentance involves telling Mark that he interrupted her masturbating and it left her quite frusterated. If you can handle that much bluntness than youll be fine in this movie.

Mark pines over Anna, despite her not being interested in him because he lacks good genetic code. After his sad date he returns to work to find out that he is fired. His secretary and co writer are extatic (played by Tina Fay...in a great bit role...and Rob Lowe...great as always) while his boss (Jeffery Tambor, wonderful) is depressed.

He returns to his apartment to find his friend Frank (Jonah Hill in a clean but funny role) still contemplating suicide and his rent is due. When he goes to the bank, knowing he doesnt have enough money, he somehow, someway, lies and says he has the right amount. Eureka...lying has invented! Thus the films plot picks up and we learn what the world would be like if one man could lie to get anything he wants. And for the most part its all hillarious.

Its in the latter half of the movie though that the film really gets a deep meaning when Mark makes his biggest lie of all: he invents God. Everyone believes when they die thats it. But Mark says that we all go to a great place when we die where we live forever, unless we are bad than we go to a bad place. Its all done very tounge in cheek but its also really thought provoking and it really is done in a great way.

The acting is extremly good in this film. Ricky is hillarious as always (I seriously cried laughing during a few parts), Garner is sweet, funny, and does a really good job. Lowe plays a great villain and Louis CK does a great job as the sidekick.

Its the cameos that really steal the show though.

You have Tina Fay playing the overly blunt and rude secretary who is so laugh out loud funny, as Fay always seems to be.

You got Jeffery Tambor as the boss doing a great and hillarious job.

But what got me was 3 cameos in particular: Phillip Seymour Hoffman, Jason Bateman, and Edward Norton. You read that right. Those three are in this movie. They are in it for about five minutes a piece but they are all definite show stealers.

My three favorite scenes involve them. Ed Norton plays a cop with a cocaine problem but its done in a way that is so funny that you CANT NOT LAUGH. You wish you could control police officers that way. It also helps that Norton is the greatest actor ever!!

anything he is in is automatically great.

Hoffman however plays a dopey bartender in what could be the greatest comedic scene of the 2000s. Gervais, CK, and Hoffman are in a bar and Gervais is trying to explain how lying works. What results is the greatest back and forth "Whose on first"esque ive seen in a long time.

And Bateman comes in another great scene playing Mark's mothers doctor. It makes you glad doctors can lie to you or let you down easily.

With the phenominal cameos, the fantastic writing, the great moral story with religious undertones and the romantic comedy subplot, this is probably one of the better comedies of the year.

MY VERDICT: SEE IT (cant give it an own it because I probably wont buy it but I give it the highest SEE IT I could give)
Posted by xTJMac510x at 8:17 PM