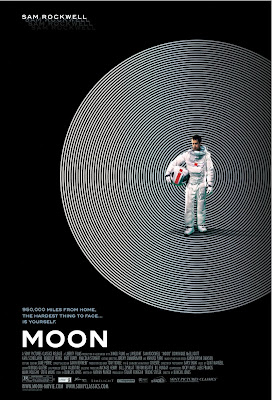 I enjoy sci fi movies a lot. Sci Fi Films give a sense of wonderment and plenty of what if scenarios. They have sprouted many devout followers and the really good ones are timeless masterpieces. Recently however most sci fi films have either been epic action films (Transformers, Star Trek) or just full of unnecessary gore (Alien vs Predator, most indie alien films). While I have no problem with the former (in fact I quite enjoy them...for the most part) the latter has seemed to dominate the sci fi genre...even going as far as defining it. But films like Surrogates have given me hope that the subtle, message driven sci fi of the past, full of moody atmosphere and claustrophobia (like 2001 or Alien) or great What if scenarios (Surrogates) that maybe the sci fi genre will bounce back deeper than ever.

Moon is one of those films. Filmed by David Bowie's son Duncan Jones (first time director) this Sam Rockwell vehicle film is great in its subtlety. There are only 8 actors in the film but you only really see (up close at least) 2 1/2 of them. This gives a great opportunity to show off Sam Rockwell's extremly underused talent as well as showcase Kevin Spacey's haunting voice (he is GERTY the computer of the ship)

Moon (without giving any plot away) is about Sam Bell(Rockwell), an astronaut in space who is stationed on the Moon to harvest H3, which has become the main energy source on Earth. He is contracted for 3 years and as the movie starts he only has a few weeks left. His only company is the computer GERTY(Spacey) who talks to and takes care of him on the ship. But in those last three weeks things get complicated.

Its a great film with many chilling twists that make you think of how close we are to it being a reality. Rockwell and Spacey are phenominal considering its a one man (two if you count Spacey) show. Spacey is haunting, clever and channels his inner HAL great. Rockwell is great showing amazing range and emotional depth in his performance.

Its not a groundbreaking movie but for anyone who is a Rockwell fan or a fan of 2001: A Space Oddysey or those subtle sci fi's than this is the film for you. Even if you arent a sci fi fan i reccomend it wholeheartedly.