Turn the right corner in Sin City and you can find anything... anything 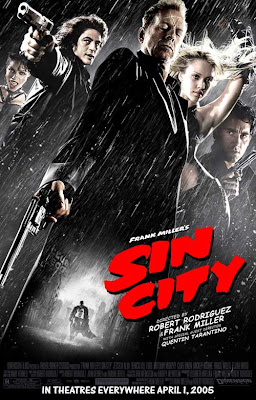 Hello I am the movie encyclopedia and if no one else will see it, I will.
Franks Miller is a comic book legend. Known for his over the top designs and even more over the top writing nevertheless his graphic novels have definetly become an essential part of any comic book fans collection. And who wouldve guessed that his comics, specifically Sin City and 300, would become great movies? Well they certainly are great and since I already reviewed 300 its time to review my other favorite Frank Miller graphic novel turned film...Sin City. And who better to handle this film than Robert Rodriguez and Frank himself...with a little help from Tarantino.
Sin City is a large ensemble action drama consisting of many big name actors and actresses. Mickey Rourke, Clive Owen, Bruce Willis, Jessica Alba, Josh Hartnett, Rosario Dawsen and PLENTY more. It was like they took all of the great actors in 2005 that werent busy and shoved them into this film.
The first two things you will notice about this film is its style and the way it tells a story. Its style is something we havent seen since the days of noir and it even goes beyond that. Shot completly in black and white with red, blue and yellow this film is a marvel to the eyes. The hard black edges, the larger than life characters, everything in this movie is a sight worth seeing itself. The narrative style however is something that might throw people off. Its divided into chapters each dealing with a specific character usually. Most of the time their paths dont cross and so as a big picture it can seem confusing. But if you look at it just as it is from story to story than it is amazing.
The writing, the directing, the acting everything about this movie is a unique experience. The inner monologues are deep, never cheesy and very thoughtful. There are so many quoteable lines and remarkable scenes that you will remember every shot of film for years to come.
Its a movie that everyone should at least see once. Its deep, insightful, animated, well acted and just a kick ass movie.
MY VERDICT: TOP 20
Posted by xTJMac510x at 5:46 PM