Ooh, I'm done! Brothers never make it out of situations like this! Not ever! 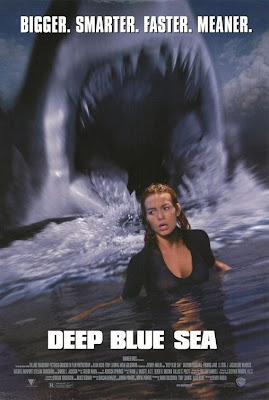 I hate sharks. I especially hate mutated Great Whites that have a huge blood lust. In Deep Blue Sea, directed by Renny Harlin (of Mindhunters) those fears come to a head.

The story of Deep Blue Sea revolves around a group of scientists trying to cure Alzheimer's disease by experimenting on sharks. They create three "mako" sharks and give them augmented brains so that they can have the brain capacity of a humans. Once they did that they would be able to harvest brain tissue and ulitmately use that brain tissue to cure Alzheimer's. They get a pretty good group of people consisting of shark wranglers, engineers, scientists, communications specialists and a wise cracking chef named Preacher. Needless to say all hell breaks loose and people start dying. So they send corporate executives to try and handle the situation. When that doesnt work and the sharks all get loose, its up to them to escape and reach the surface, or die.

The story is pretty formulatic and cheesy but has one great twist: When you think something good is about to happen they snap you back into reality. Take this scene for example:


Yes its funny and yes its cheesy (especially look at Jackson's face before he dies) but its kind of a "What the...? That usually never happens." moment and that is a pretty frequent trend in this film...especially with the ending. Let's just say you wont see it coming.

Tom Jane and LL Cool J are both great in this movie and are really one of the big redeeming values of this movie. Otherwise the acting is subpar. The tension and the thrills are good but nothing special

If you liked Jaws or shark films, or you just want a decent random thriller than watch this one.