I LOVE my babies. Why would I want to PUSH them away from me? 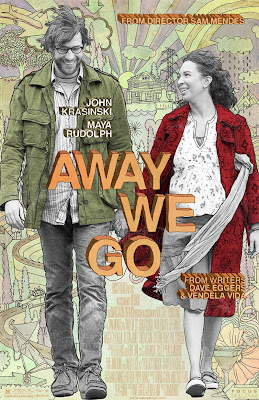 I happen to be a huge fan of the Office. I also happen to be a huge SNL fan. So you can probably guess my excitement when I heard John Krasinski and Maya Rudolph were going to be in a movie together. But when I heard, while having its share of laughs, that Away we Go was a drama I was a bit suspicious. I was also a bit suspicious when I heard it was rated R since both of these actors usually work clean and rely on facial expressions and body language instead of just language. And it was an indie film. So I definetly had my doubts about this "dramadey" Well I can tell you that Sam Mendes (of American Beauty and Revolutionary Road) and writing couple Dave Eggers and Vendela Vida have thrown away any doubts that I had.

Away we Go is a pretty simple story and in fact you learn the whole plot about ten minutes into it. Verona and Burt (Rudolph and Krasinski) are a couple about to have their first child. When they learn their only close family is moving away, they too decide to move away traveling round the country. While it sounds like a simple story (and they even cleverly put title cards like AWAY TO TUSCON) it has a lot of twists, turns, colorful characters and events that make them think about their lives. Its a road trip movie but with a lot more heart.

Krasinski and Rudolph blew me away. They, who are comedy legends in their right, show amazing dramatic depth in their performance. They dont push the boundaries into overdramatic, luckily, and instead rely on true talent that seems to come natural to them. And one thing thats nice is unlike a lot of other comedians who do dramas, they dont RELY on being serious. Its a ROAD TRIP movie. There a lot of laughs and funny things in the movie as well as a lot of great one liners but it ends up leaning toward a drama in the latter half of the film (which is why i labeled it a drama).

Its a real feel good movie that maybe abruptly ends for my taste. Then again an hour and a half seemed like a good length, not really pushing it and overstaying their welcome. Its a CUTE movie more than anything and it really does make you feel good watching it and is a good film for couples to watch.