I'm gonna eat your brains and gain your knowledge. 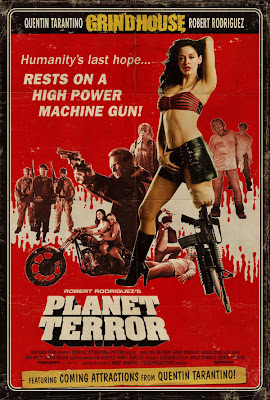 When put together the Grindhouse series creates a unique experience that we in the now generation could never experience. Exploitation films shot in grainy 70s style film stock as well as "missing reels" and white outs are something of the past. Robert Rodriguez and Quentin Tarantino loved these kinds of film and thus set out to make a double feature 3 and a half hour experience known as GRINDHOUSE.

Robert Rodriguez's entry Planet Terror is a sight to behold. To some it is a way over the top zombie action horror film but to others (myself included) it is one of the best movies to watch at a party where no one has seen it before. Its THE movie to make fun of. And Rodriguez did that on purpose. Planet Terror is very tounge-in-cheek with its humor, style and flair. Its darkly funny and is a great send back to the old zombie films of yore.

You know you have an interesting movie if there is:
Fergie
A stripper with a machine gun leg
Revolver uppercuts
Zombies and alien mutations
a hillbilly with an obsession for BBQ

I mean its so cheesy and campy and roll your eyes while laughing bad! But it doesnt take itself seriously. If it would have even attempted serious this movie would have been an abomination to cinema five minutes into it. Instead we get a morbid comedy filled with one liners, great action, minibikes and a whole lot of awesome.

Out of the two grindhouse films this one is far surperior. Its definetly worth picking up and is especially worth picking up for the DVD extras. But if you like horror comedies, Robert Rodriguez or zombie movies that dont suck or arent terror inducing then please buy this movie and support a possible (but not likely) sequel. This movie was just too awesome for description haha.