Before you do anything you have to ask yourself if you can do it. If you can't do it, don't start...you'll just get someone killed 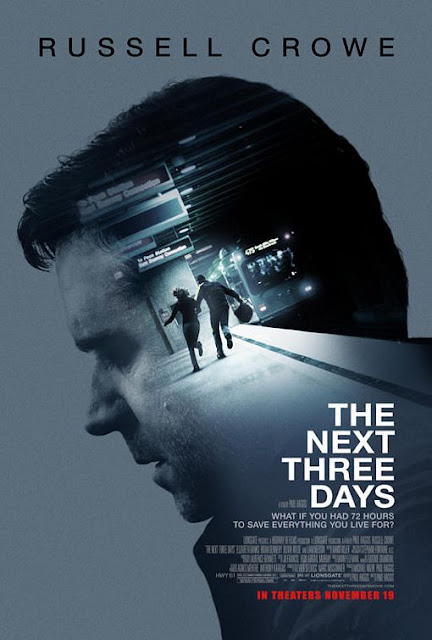 French films seem to be getting remade a lot these days. And if not remade then there are certainly plenty of movies lately that base their premise on a French film. The Next Three Days is one of those films. Based on the French thriller "Pour Elle," (which is fantastic if you ever get a chance to watch it) The Next Three Days is the newest film from famed screenwriter and short lived show mastermind Paul Haggis. Best known for his work on Crash, the past two Bond films and The Black Donnelly's, Paul Haggis returns to the director's chair for a fourth time to deliver us a tense thriller that relies heavily on convenience rather then reality. 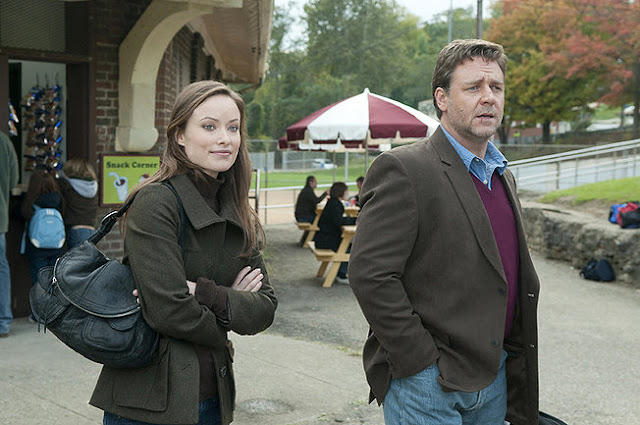 Russell Crowe plays John Brennan, an English Professor at the local Community College, whose wife Lara was arrested and convicted of murder. John believes it was a case of wrong place, wrong time but all of the evidence points to Lara and so most of his appeals get shot down immediately. John, between appeals work, is also tasked with taking care of their young son Luke who seems to have taken Lara's departure the hardest. He is quiet, anti-social, and practically ignores his mom at the jail, which is something that worries both John and Lara. John keeps to himself mostly but during all this meets Nicole (Olivia Wilde), a young mother whose daughter has taken a liking to Luke. She is apparently the only person outside of the justice system that he has told about Lara's incarnation.

After spending three years in prison, Lara attempts suicide and that causes John to shift his focus from getting her out legally to getting her out in any way possible. He consults Damon Pennington (Liam Neeson), a man who has escaped prison multiple times, and he gives John all the information necessary for him to break his wife out of prison. The problem is if he can't do it successfully, Luke is going to grow up without both of his parents, and that keeps John hesitant throughout the first half of the film. 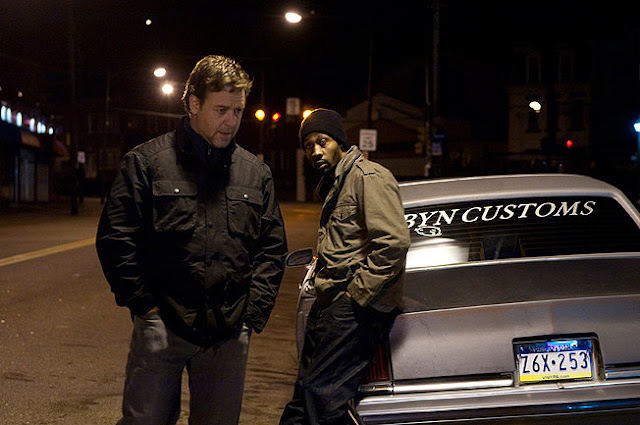 The second half picks up the in the action department and it's also where the films flaws rear their ugly head and the biggest problem is believability. Now I realize that movies are meant to be fiction (unless said otherwise and even then) and in films if you want to move the plot along you have to have things happen at convenient times so that the hero can accomplish his goal. Well in this movie conveniences happen to everyone and that really throws off the reality of it all.
I can understand John handling and using a weapon. If people were shooting at me I could turn into Rambo pretty quick. What I DON'T understand is a detective looking at a Prius key and knowing it's automatically John. Or a detective seeing John puke after a visit to the prison and thinking "He's going to break his wife out of prison next week." Actually most of these stretches are courtesy of the police, who are apparently gods and can make no mistakes. Even when they do make a mistake, they rally in no time and are right on them. I know police officers and I have never seen an entire city's police force centralized on two people, on foot mind you, and be able to respond to whatever direction the detectives tell him in 10 seconds. I call bulls**t. I know it may seem minor to some people but when it's used in succession as much as it is in the second half it gets eye rollingly obvious that they were running out of script.
Besides that though the only other problem is throwaway characters. I mention Olivia Wilde and Liam Neeson in the synopsis but really they are in the movie together a combined 15-16 minutes (and that's mostly Wilde). I understand cameos but when you base almost your entire marketing campaign on one man's 5 minute speech, it can be disappointing to realize that that speech was it. As for Wilde's character she is never really fleshed out enough and her character is left with a giant "Well what did she do?" moment that never gets answered. I have a feeling it's on a cutting room floor somewhere. 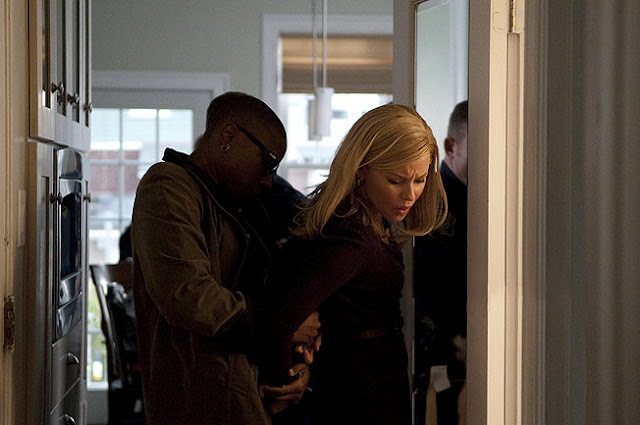 The film is actually pretty well done though on the acting and the technical side. It's paced nicely, the camera work is great, the soundtrack is intense and all of the actors, especially Crowe and Banks, give it their all as their characters. Despite being built like a construction worker in the summer, you could believe Crowe was a mild mannered teacher. And Banks, whose mostly known for comedy roles, gives a great dramatic performance of a woman wrongly accused. Neeson and Wilde are good in their small parts but only Neeson really stands out. His speech is epic and extremely well delivered. If I take anything away from the film it will be his speech.
The Next Three Days is one of those hard ones to rate. It's a good film but it suffers from throwaway characters, plot holes and conveniences that not even Sherlock Holmes could figure out on his own. But I do believe it IS worth seeing if you're willing to turn a blind eye to realism and hopefully you enjoy the ride.
MY VERDICT: SEE IT
Posted by xTJMac510x at 10:50 PM