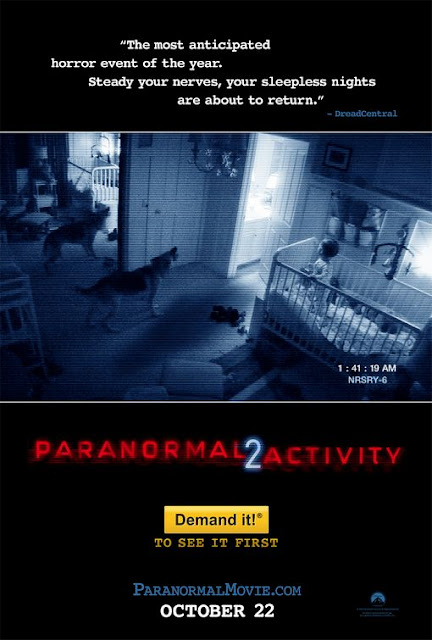 Hello I am the movie encyclopedia and if no one else will see it, I will.
As many of my readers will know, I loved the first Paranormal Activity. What some people don't know is up until Paranormal Activity I really didn't like "found footage" films. I mean I had seen Cannibal Holocaust (if that counts) and Blair Witch but really I wasn't into the whole idea of home video films. As someone whose done a number of low budget (and I mean like me and a few friends) horror films, I thought that if these kind of films could get released and make millions but ours couldn't it was a bit unfair. But then, after being nagged by my friends, I went and saw Paranormal Activity and I was genuinely unnerved. It made me scared of my shadow. And it took me a while to figure out why. The Exorcist, Dawn of the Dead and The Descent were all scary in their own right but what PA did differently was that it relied on subtlety and realism, something that the aforementioned films don't have.
And since it made a huge profit it was a no brainer that they would make a sequel. But does it suffer from the usual sequelitis that other films tend to have? Surprisingly no. It's not as good as the first one, but it's still damn good.

The film follows the family of Katie's sister Kristi. Katie, if you'll remember, is the woman from the first one who went completely crazy at the end, and by crazy I mean a demon possessed her and killed her husband Micah. Kristi has just had a newborn baby and like all new parents she wants to document everything. So she gets Alli, the daughter, to do all the taping mostly since everyone else has their hands full. Besides Alli, Kristi and the baby, the only other people in the house are Dan, Kristi's husband, Martine, the housekeeper, and Ashley, their German Shepard. One day the house is ransacked and Dan, wanting to make sure this doesn't happen again and if it does that they catch the guy who did it, sets up security cameras all around the house. That's when things start getting weird and we learn that not everything is what it seems.
It's actually a lot harder to write the plot out without actually spoiling the movie. I had the first one spoiled to me before I saw it and while up until the last few minutes not a ton happens, spoiling the ending was kind of a bummer for me. But there is a lot more explanation in this movie as to why things are going on and in fact, why things went the way they did in the first movie. That and a lot more stuff goes down. To me that's a good thing and a bad thing. While I like that they threw in a lot more creepy and scary things to make me squirm, the first one was all about subtlety. Maybe it's the new 3 million dollar budget, but the movie throws a lot more in your face this time around then just waving it outside of your peripheral vision, which is one of the things I loved about the first one. When it came out on DVD, I bought it and I had to rewind a lot. With this one, not so much. It's not that there aren't clanging pots and pans and whatnot in this one, but towards the latter half of the film, it gets a lot more in your face.
Considering that they were trying to make it feel real, the acting was actually really good and in my opinion is one of the places where this movie is better. I say that because it's a lot easier to relate with and care about this family moreso then Katie and Micah. Micah kinda came off as a bit of a douche for the first half of the movie (I mean taping your wife basically having a mental breakdown because of an evil spirit may be convenient for the audience but it comes off as douchy) and Katie, although likable, got a little bit tiresome towards the end. In this one, the family not only felt like a real family but you grew to actually care about them and by the end you didn't want anything bad to happen to them. I found myself a few times with a pit in my stomach hoping that nothing bad happened to the family. And the dog too. That dog is badass. I know I'm not the only one who thinks that. 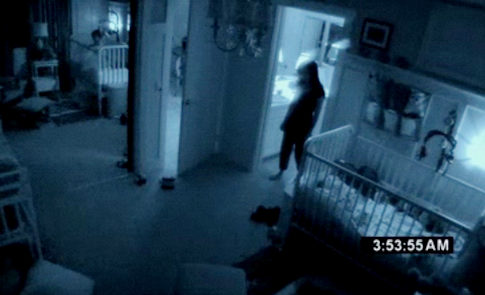 Despite my complaints of it being too in you face, I will say the effects, when they use them, are great. When possible they use practical effects (something that apparently seems dead to most people in Hollywood) but you can see a lot of effort went into the budget for the digital effects as well.
There's not much else to say about Paranormal Activity 2. Like the Jackass series or the Saw series, it's a kind of film you either love or despise. If you loved the first one, chances are you'll love the second one and if you didn't then you probably won't see this one anyway so my opinion is moot. I loved it, and I highly recommend it to any horror fan.
MY VERDICT: OWN IT
Posted by xTJMac510x at 4:54 PM