If you don't stand for something, you'll fall for anything. 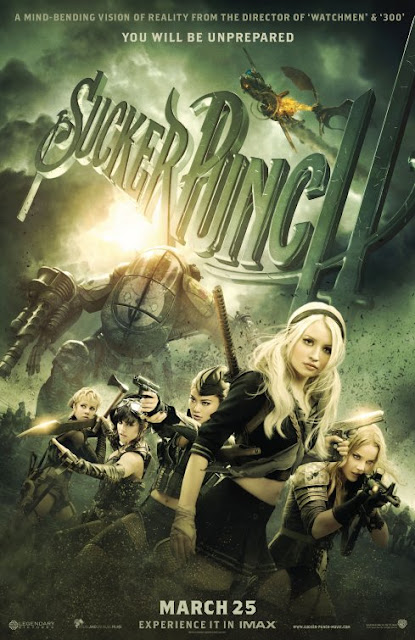 If you read my Most Anticipated List then you probably know by now that I was really looking forward to this movie and it's been my most anticipated film ever since I saw the first trailer for it. Now having seen Sucker Punch, I'm left with a cocked jaw tapping my hand against my keyboard trying to bring myself to write these words: It didn't live up to my expectations. And I blame myself for that, not the movie.

The reason why I blame myself is mostly due to my opinion of Zack Snyder. I know I'll lose fans for saying this (especially with some of the big film buffs) but I think Zack Snyder is the best working director out there right now and one of the best visionaries since Stanley Kubrick. Kind of a heavy statement isn't it? Well, up until Sucker Punch I had yet to be proven wrong in my opinion. Dawn of the Dead and 300 are in my Top 10 of all time, Watchmen is number 12 and Legends of the Guardians is in my top 30. His films are held in high regard in my household and whenever I get into debates about directors I always tend to go on and on about him. But Kubrick, Spielberg, Lucas, and Scorsese have all had duds before, or at least films that don't live up to the standards of their best and so why shouldn't Zack Snyder? Maybe it was about time he made a movie that wasn't five stars. 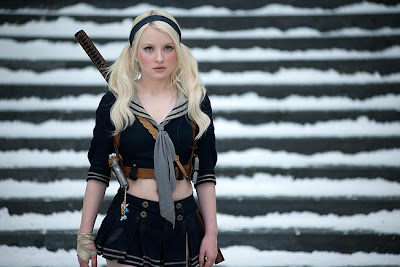 Usually by now I would be talking about the plot, then follow up with a quick analysis and then a score. But this time, it's different. Why? Well when your Most Anticipated Movie turns out to be not the best movie of the year, you tend to want to give it some more thought than usual.

If you've been over to Rotten Tomatoes recently then you will know the critics have not been kind to this film. The local paper where I'm from only gave it one star and it seems like this outpour of hatred won't stop anytime soon. And despite what you may think from reading the first two paragraphs, I DID like Sucker Punch. Was it the epic "Best movie of the year" I was hoping it to be? No. But did it show promise and excel in some areas? Yes. So what worked and didn't work? Let's start with the story.

Sucker Punch is the story of Baby Doll (Emily Browning). That isn't her real name I'm assuming, but her real name, along with the other four girls, is never revealed. The movie starts with her mothers passing which leaves her and her sister alone with their abusive and violent step-father. When the mothers will leaves everything to Baby Doll and her sister, the step-father kills Baby Doll's sister and pins it on her, claiming she went insane and needs to be lobotomized before she hurts someone else. So they send her up to a mental institution where the step-father pays off an orderly named Blue (Oscar Issac) to forge the signature of the head psychiatrist (Carla Gugino) so she can be lobotomized in five days (to keep the detectives investigating the case from asking her questions). 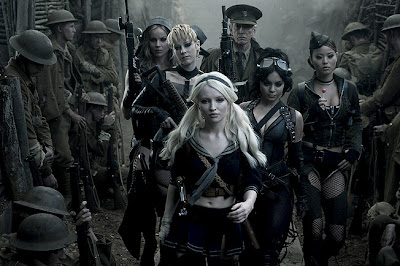 Before I go on with the plot I will stop and point out a major flaw with the movie early on. That entire scene I mentioned, save for a quick voice over about angels, is silent. That's right, silent. The whole time that scene is going on Emily Browning is singing a cover of Sweet Dreams (Are Made of These). Snyder has done this before, most notably with the Comedian fight/death scene in the beginning of Watchmen, but here it goes on for way too long. Snyder's reasoning I think has to do with his emphasis on music in the film (everything pre-sword fighting seems like a giant music video) being an integral part of the film but it comes off as dull.

Anyway back to the plot. Baby Doll arrives at the institution and quickly buries herself inside a dream world, in which her and the other inmates are whores in a whorehouse. The why is never really explained and the transition is jarring to say the least (all of a sudden Sweet Pea (Abbie Cornish) is Baby Doll and calling cut) but this world is definitely a lot more colorful and entertaining then the real world and it's here the movie starts getting good. In this world Baby Doll is going to get picked up in 5 days by the High Roller (Jon Hamm) and taken to be one of his personal whores. The whorehouse is run by Blue Jones (that orderly from before) and the girls are supervised by the dance instructor/theater director Madam Gorski (that head psychiatrist). One interesting note: the real world is very sparingly used until the end, so most of the movie takes place inside the dream world).

After spending a day there, Baby Doll makes friends with Rocket (Jena Malone) and learns from Madam Gorski that to survive here you need to dance. Due to nerves or something Baby Doll enters into ANOTHER DREAM WORLD WITHIN THE DREAM WORLD while she dances and there meets the Wiseman (Scott Glenn) who tells her a plan to escape. She teams up with Rocket, Sweet Pea (who's Rocket's sister), Blondie (Vanessa Hudgens), and Amber (Jamie Chung) and their plan is that Baby Doll will dance and while she's dancing, everyone will be so distracted that they can take what they need to escape. And whenever she dances, she enters that dream within the dream world and in there they are a spy/ninja/soldier group that do missions for the Wiseman.

And that is the basic synopsis of the film. No spoilers at all, just the basic plot outline. And in there lies another problem. Did that seem long, confusing and hard to follow? If it did then you are most people. I admire Snyder for doing something original (and by that I mean something not based on another work, his influences from other films are obvious here) but being overambitious can sometimes get the better of people. Eventually it starts sounding like the guy who goes "And then...and then...and then...and then." for two hours, it gets really hard to follow. But Snyder's witty dialogue, his attention to characters and quotable one liners are evident in this movie and I'd be a liar if I said I didn't get a little teary eyed in the end so the story, while flawed, does have promise and is worth sitting through.

The acting is a bit of a mixed bag for me. I've had a giant crush on Emily Browning ever since A Series of Unfortunate Events and she looks stunning in this movie, but acting-wise she just wasn't all there. She doesn't talk a ton (which looking back was probably good) but she always looks really bored or uninterested the entire movie. Abbie Cornish and Jena Malone as Sweet Pea and Rocket on the other hand are fantastic. Rocket is a firecracker with a lot of zing (wow that sounded cheesy) and Malone really shines when she gets to just lay line after line on people. Cornish adds a lot of dramatic excellence as Sweet Pea acting as a sort of watchdog/guardian to the group. Hudgens and Chung are just kind of there and really don't add anything to the group. Issac and Gugino are quite good as well. Issac brings a lot of that pure, demented evil person out and you really love to hate him. Gugino is working a great accent the whole movie and does have some really good moments in the film. Hamm is barely in it but he seems to be enjoying himself and does competently with what he's given. 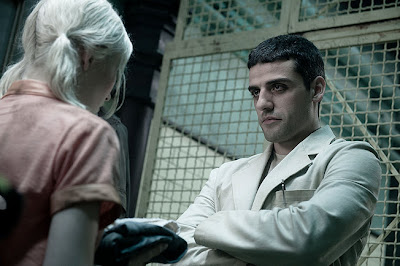 Now I can't talk about a Snyder film, or at least one after Dawn of the Dead, without talking about the visual effects. One thing critics and I seem to agree on is that the effects are great. They are truly something to behold and are a treat on the eyes. The steam-punk zombies, demon samurai's, orcs, dragons and cyborg soldiers are all really well done and show off how good CGI and make-up have become nowadays. Heck the dragon CGI was so good I kind of felt bad for the dragon. The backgrounds are also beautifully done and each world does feel truly unique. I wish more time would have been spent there, since that's where the film truly shines the most, but what's there IS really good.

So where does that leave us now? We have a confusing, convoluted, story that shows some signs of promise, a mixed bag of acting where the duds are really duds and the stars shine really bright, and fantastic visuals that are a treat to watch. So now comes the big question? Do I recommend this movie? Well when it comes right down to it I do. It certainly has it's problems and it may not be for everyone, but I do think that some of the good can and does outweigh the bad. So in the end I say...