You don't want to be trapped inside with me sunshine. Inside, I'm somebody nobody wants to f**k with do you understand? I am Charlie Bronson, I am Britain's most violent prisoner. 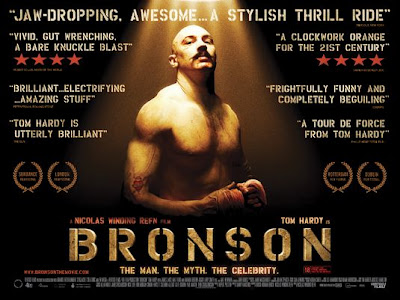 Nicolas Winding Refn is an amazing director. This was proven to me two years ago when I watched the Pusher films (good films if you ever get a chance to watch them) and it was again proven to me earlier this year with Drive (my pick for Best Film of 2011). But now having watched Bronson, a film I've rented through Netflix a few times but never actually watched but have been meaning to, I can easily say that Refn knows exactly what he's doing behind a camera and he is brilliant at that. His use of colors (which is especially interesting since he is colorblind), the way he sets up the camera and plays with different angles he makes any film better.

Then again it helps when you have such an amazing cast, especially Tom Hardy whose career should have skyrocketed after this film was release. Granted most people know him now from his work in Inception and the Warrior (as well as the upcoming Batman film) but Hardy has been around for a while and this film, much like Hardy, flew under the radar with barely a peep...at least in America. I'm willing to bet there has been some definite controversy in Britain and other countries, or at least you'd think considering this is a film about "Britain's most violent prisoner." But what do I know? All I know is Bronson is one twistedly funny and dark film that could very well be called the Clockwork Orange of the 21st century.

The film is the semi biographical story of Michael Peterson who has become better known by his fighting name "Charlie Bronson" which he got from the famous action star Charles Bronson. He had a fairly normal upbringing but liked to fight. He'd fight in school, he'd fight in the street and got in trouble with the law a few times. But fighting isn't really a bad thing from where he's from. So eventually he gets a job, settles down and has a kid. But as a man who loves to fight and loves the attention he gets from fighting, he decides to up his game and rob a post office. This lands him in jail and once there he decides he wants to become famous. But not famous for nothing....no, he wants to be known as the most violent and dangerous prisoner Britain has ever seen. So every chance he gets he fights the guards. He fights and fights and fights. He's obviously bonkers but he's almost so bonkers he's sane. He's like Batman's Joker in a lot of ways: crazy but fascinatingly sane about the whole thing.

The whole story is told from Bronson's perspective, with Bronson narrating the whole thing in two different settings. In one setting he is just standing in a dark room with a light and the other is a full on stage production. I was never sure if this was real or all in his mind but it was fascinating how it would switch back and forth between the different settings. The film keeps you on your toes. Just when you think you are going to get settled in, it turns on you and switches directions. In a way this could be bad for some because it does jump around a lot, but for me it kept things interesting and I was engaged from beginning to end. It also helps the film is as funny as it is serious so for every serious moment you get a funny moment and vice versa. Very clever writing there.

Besides the direction, probably the best thing about this film is Tom Hardy. He IS Bronson. Every nuance, every twitch, every mannerism, he has it in spades. One minute he is a violent lunatic, next he is a quiet reserved man and then boom he comes out and he is a clever, sarcastic dry witted man with plenty of jokes. Hardy's almost schizophrenic approach to Bronson only helps make the character more dynamic and you root for him, even though he is doing terrible things and is obviously out of his mind. Hardy's Bronson is never boring and if you remember one thing about this movie, you'll remember him. The rest of the acting is fine but is engulfed by Hardy. Even if the scene belongs to someone else he somehow steals the show without even having to blink an eye. His being there is enough to steal the show. That's REAL charisma.

On a side note I have to point out that the soundtrack and score to the film is amazing. Almost as amazing as this guy's dancing:

Bronson is definitely a polarizing film and I can understand it may be a little too out there or extreme for some but I absolutely loved Bronson. Hardy is fantastic, Refn is an amazing director, the music is great, and I loved everything about this movie. Is it perfect? No but it's definitely one everyone should check out.