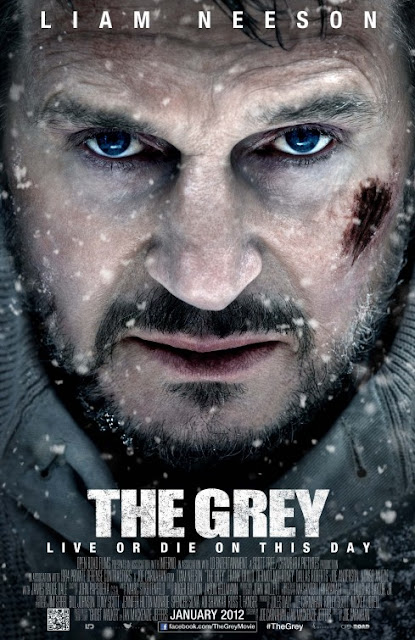 A howling wind can be heard in the background as a simple title card with two words pops up: "The Grey." Whether that's a testament to the men involved in this picture or the arctic tundra itself is up to the viewer. A man named Ottway, played by the always fantastic Liam Neeson, then starts narrating about life, work and the futility of everything now that his wife is gone. He does this in the form of a letter to his wife which he knows he'll never actually send. Very quickly this film lets you know that this isn't going to be a happy picture. It's dreary, depressing and leaves a pit in your stomach, and that's before the story even really gets going. The defeat in Ottway's voice is enough to show you that things can only go down from here.

This is the start to The Grey, the newest film from Smokin Aces director Joe Carnahan (who also co-wrote the film). Marketed as "Taken with Wolves" this film promised to be an action packed, wolf-punching-with-broken-bottles experience that we'd never forgot. Well that is not the case, or at least the former part of this sentence. The film is less an action film, more than a survival horror with a surprisingly deep philosophical element as man faces nature in a battle to the death. Think The Edge, but replace the bear with wolves. That latter part of the sentence is true though as I doubt I'll forget this film any time soon. 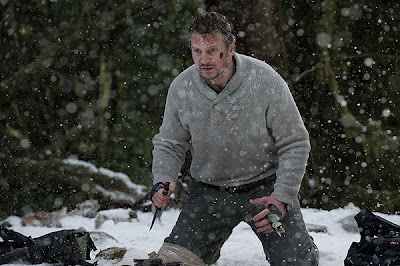 The film follows Ottway and a small group of survivors after their plane goes down in the middle of the arctic tundra. They are low on food and supplies, dead bodies are everywhere and worst of all, there are really pissed off wolves who want them dead. Not because they don't like humans, but because they are protecting their turf, and these humans are intruders. Now they must find a way out, or at least a way back to safety without getting eaten by the wolves.

The story is a simple survival/long trek story but is littered with brilliance throughout. While most of the dialogue is Joe Carnahan's saltiness at it's best (they throw around the F word like it's nothing) there are a lot of really deep and thoughtful conversations that come off like real people talking about their humanity instead of actors playing a role. Neeson gets a ton of great lines throughout the film and is always moving the story along at a really great pace. Pacing is one thing Neeson has in spades. Part of what made Taken, and to a lesser extent Unknown, such good films is that Neeson can make a situation as tense and fast paced or as slow and methodical as it need be. If he wants you to listen, you listen and if he wants you to panic, your heart will be racing.

The other actors are actually quite good as well, even if none of them hold a candle to Neeson. Frank Grillo plays the foul mouthed tough guy Diaz in a way that makes you hate him one minute and sympathize with him the next. Although he acts like a tool most of the movie, you see genuine concern in his eyes and an actual caring for the people around him. Dallas Roberts and Dermot Mulroney also put in some great performances, making you genuinely care about most of the people involved. In fact at both screenings I saw, I had the person I went with lean over and tell me "Oh I like so-and-so, I hope they make it." If a film has done that, then it has succeeded in it's writing and acting. 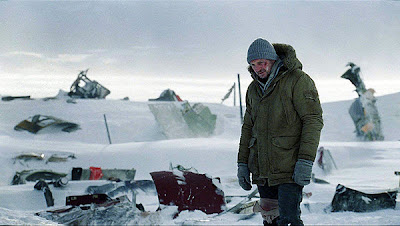 My complaints against the film are really quite minor in the big picture but definitely hold the film back from being perfect. The wolves definitely border on Twilight levels of CGI badness and there are some scenes that could have been shorter and had been just as good. Also, and this may have just been me, it was pretty obvious who was going to get the boot minutes before they got the boot. I realize that there is a structure to how your supposed to do those kinds of scenes, but predictability can make an otherwise tense scene seem boring. And while I didn't have a problem with it, there were a lot of people at both screenings who hated the ending. Me, I thought it was well done, but just letting you know ahead of time that you may be disappointed. Also be sure to stay through the credits as there is a scene at the end that gives you a little more of answer to what happens.

Overall though The Grey is a fantastic wilderness survival horror that is well acted, well shot, well written and worth the price of admission. If you like Liam Neeson, The Edge, or films about man vs. nature then this is the film for you.

Email ThisBlogThis!Share to TwitterShare to FacebookShare to Pinterest
Labels: drama, Own it, thriller