I am an Apex Predator. Does the lion feel bad killing the gazelle? Do people feel remorse when they kill a fly? 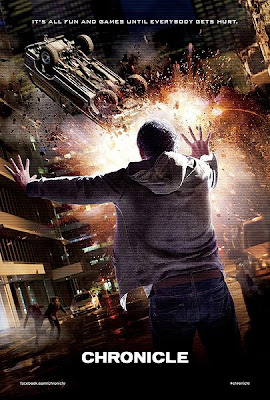 I never really bought into the hype that surrounded this film. To me it just looked like another found footage film but this time with teenage superheroes learning how to harness their powers. I mean it was an intriguing enough premise that I knew I would go see it, but honestly I wasn't expecting much. Much to my delight my expectations were FAR exceeded and Chronicle is the best film I've seen this year so far. Granted it's still pretty early to be throwing that term out, but I'm pretty sure it will be on my Top 10 list this year. 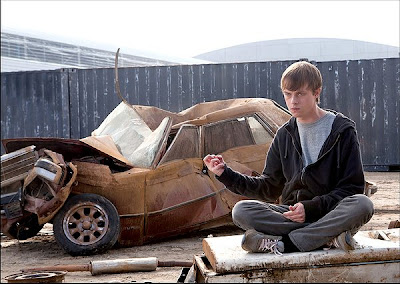 The film follows Andrew, a troubled young teen who decides to start taping everything that goes on in his life. Whether it's because he thinks his life is really film worthy or because he's trying to find something to distract himself from the fact that he has an abusive, alcoholic father and a mother dying of cancer, it's up to the viewer really. He's constantly picked on because of his size (and the fact he carries around a camera) and his only "friend" is his cousin Matt, who would much rather he put down the camera and try to fit in with everyone else. One day, at a rave out in the middle of nowhere, Matt and his buddy Steve, the school quarterback and politician in the making, find a hole and convince Andrew to document what they find inside. They find what is inside the hole but before they can really get a good idea of what it is, they are knocked out and wake up outside the hole, but this time they have superpowers. Now they have to figure out what to do with these newly found powers and learn how to control them.

The story is interesting because it gets better as the film goes on. In fact if this film was a chart, it would be an upward slope. It starts off slow and kind of uninteresting but by the end it's an amazing character study/action film of troubled teens with superpowers. The screenplay is brilliantly handled, giving each main character their own struggles, feelings and grasp of the situation at hand and you really grow to care about these characters, even if they start to get a little loose around the seams towards the climax. The dialogue feels real, with only a few lines throughout that feel like "line" lines and the film progresses at a very nice pace, only stuttering a few times.

The acting, like the film, is also surprisingly good. The cast is relatively unknown, save for Michael Kelly as Andrew's father and Michael B. Jordan (from The Wire) as Steve but they all give really great performances. Dane DeHaan, who plays Andrew, is especially good considering his character goes from quiet to loud to crazy all within the span of 80 minutes and somehow keeps it relatively believable. You root for him and genuinely feel bad when something happens to him, in yet you can tell something is off about him. Alex Russell's Matt is also brilliantly done as he has sort of the opposite effect of Andrew's character. He starts off popular and ends up being a sweet and caring guy which is something you'd never think would come from him at the start of the film. The rest are great as well but Andrew and Matt really steal the show here. 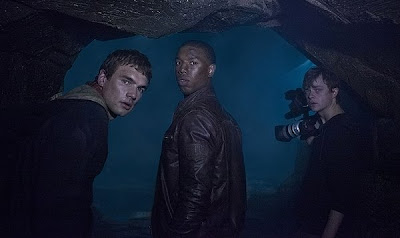 One of the film's biggest successes lies in how it's technically done. It's a first person film (aka found footage film) but because of their superpowers, Andrew's editing skills (he's seen editing scenes from time to time) and the film not adhering to one single camera (there are multiple people with cameras) it's able to do things that no other film of it's type have been able to do and it adds a whole new dimension to how these films can be done. One of the big downfalls of this type of film is the shakiness and the need to stay in one static place. With this film there are swooping motions, back and forth quick cuts, hovering and above all else...barely any shakiness. From a cinematography standpoint this film is genius.

But films like these come with a price and that is my only real flaw with this movie: The Logic Questions. Why is Andrew taping everything? Why doesn't he put the camera down at certain points? Where did he get another camera? How was this footage found? How were they able to switch cameras (in the back and forth scenes)? Questions like these and more, as well as the short time in all these films that is spent explaining the camera and it's purpose (and most of the time, this film not being an exception, the reason is iffy), kind of take you out of the film if you try to overthink it. If you're willing to let those questions go and just enjoy the film it's not much of a problem but I did find myself wondering from time to time some of these questions.

Overall Chronicle is a great surprise of a film that I still think about today. Even if superhero/first person films aren't your thing, give this film a shot, it's worth every penny you spend.