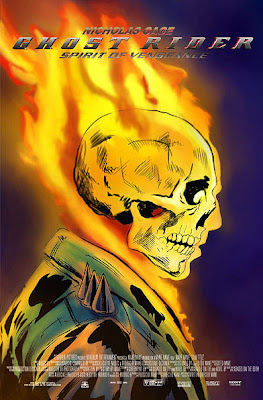 Ghost Rider 2 is like a mixed bowl of chips. You go to a party of there is a bowl of chips and it just so happens when the host was filling it with Sour Cream And Onion(your favorite), that bag was only halfway full and didn’t fill the bowl. So the host takes a whole bag of Salt And Vinegar(not your least favorite, but you would never buy them as a personal treat) and mixes it in with your Sour Cream + Onion. While you eating the Sour Cream, your happy, but while your eating the Salt and Vinegar, your not exactly satified, but your excited because you know as you dig further your going to get to your Sour Cream chips and be happy. Make sense? No. Fuck you.

Ghost Rider: Spirit of Vengeance is a as I said that mixed bowl. But let’s talk about the failings of the film first. The screenplay, credited to Story By David S. Goyer, Screenplay by Jim&Joe and David S. Goyer. Jim & Joe don’t matter, what matters is Goyer. Goyer is a writer whose name a movie suggests neither the greatness or terribleness of the film. His name means nothing. His name when it comes to direction means trouble. The Invisible, trash. Blade: Trinity, rubbish. The Unborn, the worst movie I have ever seen theatrically. A movie where even Gary Oldman is terrible. David S. Goyer is proof of the uselessness of most screenwriters. His name may be on the Nolan Batman films and the first two Blade films, but he’s hardly to thank.

The problem with Ghost Rider: SOV lies within it’s script, within it’s story. William Goldman says that screenplays are really only structure and that the quality of writing doesn’t matter. Of course, he’s known a grumpy old man but taking that to heart as the job of the screenwriter, Goyer has done poorly. Neveldine/Taylor, the great directors of this film(and I mean that, great, I really think they are great and not at all the faults of this picture and the only reason it at all works but we’ll get to that). Yes, Goyer is able to give us ACTs 1-3(and in that order) yes there’s a story, but he is no wordsmith. Poor interactions between characters of just simple exposition. That’s all it is. I don’t think the man has any idea how to bring characters together other than by transferring the T2 relationship between the T-800 and John Connor to this film. Neveldine/Taylor are forced to direct scenes in which two people are talking exposition of they are not the directors to simply have two people standing or sitting, talking, unless someone is getting their nipple or elbow severed, or the main villain is tap dancing for no reason at all.

The basic story of the film is that The Devil(Ciran Hinds) is getting weak in his human body and needs to transfer his power to little Danny boy, who happens to be his son. He employs, Carrigan(Johnny Whitworth) of whom eventually becomes the villain Blackout to find the boy. And then of course Ghost Rider needs to stop that with the promise from Charles Miner/Stringer/Luther/Idris Elba that his demon will be released and he will be a free man. The demon boy has a mother, Nadya, played but Olga Kurylenko’s twin Violante Placido, of whom has a past relationship of barely any concern to the film with Carrigan.

The movie works and only works because of Neveldine/Taylor. The film is essentially Crank Lite. It’s Neveldine /Taylor tied down. The Crank films work because there are no limits. Severed elbows, fucking in the middle of a horse track, horse cock,  tap dancing bad guys, living heads inside a fish tank, full bodied Tourettes, a man electrocuting himself for 90 minutes to survive. The Crank films and Gamer are essentially video games. No Rules, no plausibility. Ghost Rider, a film involving demons and angels though apparently requires some sense of not so much plausibility as it does sanity. This seems like a case of directors being tied down and doing their best to get their signature style in. All their crazy camera work is certainly here but only a small amount of their humor, but when those scenes come, it’s quite satisfying(especially the flaming piss). They know Cage works when he’s crazy(Bad Lieutenant, Vampire’s Kiss, Leaving Las Vegas) and we get some moments of that and when it comes, it is so refreshing, but then come the scenes of story, of exposition. The film is too chained down but having to be a coherent semi-blockbuster that Mr. Ten Movies In The Cinema a year can take. The Crank films aren’t films for Mr. Ten Movies In The Cinema a year. What happens in this film is directors doing things they obviously don’t care for: a story that isn’t absurd(yes it’s absurd but it’s not meant to feel absurd, while the Crank films are all about feeling the absurdity of every moment), they’re directing scenes they are actually supposed to convey some sort of emotion(Gamer did this but Gamer they wrote). The problem is it feels like Neveldine/Taylor don’t care for the story, it feels like the would of loved to have written and made their own movie, but that sadly didn’t happen, but nonetheless, there are still a good amount of Neveldine/Taylorisms to somewhat satisfy and not make the film a complete mess.

One problem that can be thrown their way is the action. There is certainly a quality to it, but the problem is Ghost Rider is essentially Superman. He simply throws his chain and baddies are ash. Of course when there is the Superman problem, the weakness has to be thrown to the fact that he must protect the boy and the child but a superhero fighting mere mortals takes away from any tension in the action. Yes, it’s fun to see bad guys freak out and not believe this demon guy, kicking their ass but even when it comes time for Ghost Rider to fight the super villain that is Blackout, it isn’t anymore special than two regular dudes fist fighting in the backyard.

As for the performances, Nicolas Cage is Nicolas Cage. He’s great when he’s crazy(and thankfully we get some of that) but when he has to sit down and have a sane conversation with someone, obviously, he doesn’t care. He’s bored, I’m bored, we’re all bored. Cage is a great actor and a terrible one. Subtleness is not is mode. Charles Miner/Stringer/Luther/Idris Elba is somewhat enjoyable in his French accent but all in all, he’s a great TV actor, an acceptable film actor but he’s able to hold together the scenes of sane Cage and make them somewhat worthy of screen time. Johnny Whitworth as the villain Blackout? It’s something I’m sure some will say is terrible but some will say is enjoyable, but it certainly isn’t great. It felt the potential of that villain that should steal the show but never really does. He’s essentially the secondary villain behind The Devil/Rourke but he gets the job done enough. Ciran Hinds though seems to actually have taken his role quite seriously and ends up being the best part of the film. There is just something so fucking creepy about his face and with a face like that, The Devil is the perfect role. He is certainly miles better than Peter Fonda in the previous film. When it comes to the boy and his mother….well who cares. They’re there. The mom’s hot and that’s all she needs to do.

All in all, I personally found the movie to be satisfying, of course that is going in to see it with the horribleness that is every review that is coming out. But that fact that they decided to screen it at Butt-Numb-A-Thon(not exactly Cannes) tells us that someone  at Sony had faith in this. Showing a film that is apparently terrible according to most people two months early seems like quite a risk.  Neveldine/Taylor seem somewhat proud of the film and there is enough of them in the film to show that. If you’re a fan of them, there’s a chance of enjoyment and I feel it might only be my fandom that made me enjoy this film., but it does give me worry that the guy who wrote this, wrote the new Superman film. 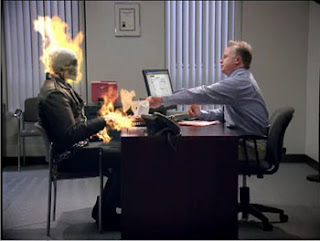