My heart is stronger now, because you're in it. 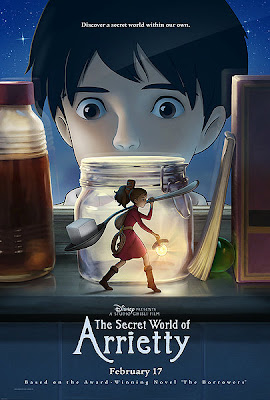 Ever since I was little I've always had a soft spot for Studio Ghibli films. Their lush animations, compelling stories (even if they were aimed more towards a younger audience) and, for the most part, incredible acting have always kept me interested ever since I first saw Kiki's Delivery Service way back when. Now that's not to say I've loved every film they've put out, in fact they've put out some less then stellar films (i.e Ponyo), but usually if I see the blue Totoro production card in a trailer, chances are I'm going to go see that movie. Their latest release The Secret World of Arrietty is no different and I'm happy to report that it's one of the better "kid friendly" Studio Ghibli films to come out.

Based on the book "The Borrowers" by Mary Norton, The Secret World of Arrietty is the third adaptation of this story that I've watched. The first was the 1997 BAFTA nominated film The Borrowers which starred John Goodman, Jim Broadbent and Hugh Laurie and the second was the 1973 Emmy Award winning Hallmark film starring Eddie Albert. There have been other adaptations throughout the years as well but my initial concern with this film before I even saw it was that it would remind me too much of the previous films. Having now seen the movie I'm glad to say that while it has some of the elements that I remember from the previous films, the Hayao Miyazaki written screenplay does enough things different that it still feels like a completely new and fresh concept. 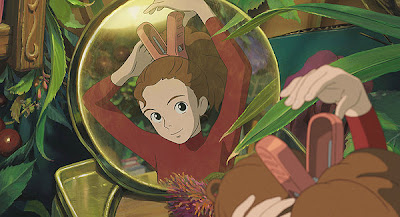 The story follows 14 year old Arrietty, a borrower (a tiny person who lives in the floor of a persons house and takes things without them noticing, usually only necessities and supplies) who is finally getting her chance to be a part of the family tradition and go out borrowing. On the day of the borrowing, a young man named Shawn arrives at the house to be taken care of by his Great Aunt Hara before he has major heart surgery. Shawn catches a glimpse of Arrietty and when Arrietty and her father go out borrowing, he calls her out and she drops a sugar cube that they had borrowed. This confrontation sparks a curiosity in Shawn and he decides to try to befriend Arrietty by bringing her the aforementioned sugar cube. Arrietty's parents warn her though that beings (humans) are dangerous and can't be trusted so Arrietty is hesitant to befriend Shawn, even though she can see he is a good person.

The story is (and I hate using this word) quite refreshing. It's not a love story, or at least not in the traditional sense, more so it's a story of understanding and friendship between two completely different types of people. It's simple but well written and tackles some pretty deep issues, especially concerning mortality and death, without getting bogged down or too depressing. Considering this is a film directed towards the young ones I was half tempted to think they were going to talk down to the audience, but it's nice to see that, with the exception of a few moments, it's written for people of all ages. The English translation (this was originally in Japanese) is written by famed children's screenwriter Karey Kirkpatrick (James and the Giant Peach and The Iron Giant) and actually translates quite well from it's source material. You never get the feeling that you're missing out on something Miyazaki meant the audience to get and you'd be surprised how often that happens in the translating process. 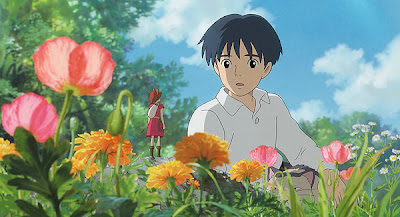 The acting in the North American release is across the board pretty decent. Bridget Mendler and David Henrie (of Disney Channel fame) take duties as Arrietty and Shawn respectively. Shawn can come off as slightly breathy and monotone at times but Henrie's charm is evident if you look for it. Mendler is one of the better Disney actresses that has come out in recent years and she does her part quite well, mixing silly and serious appropriately and only rarely does she ever falter in her role. Amy Poehler, Will Arnett and Carol Burnett round out the rest of the main cast and sadly they are a little less memorable than the two leads. Poehler plays well to her comic strengths but comes off slightly annoying at times and can get a little grating. Arnett on the other hand plays it straight and without the wit and irony that is peppered throughout his comedic performances, he comes off as quite dull and uninteresting. He also has a weird pause every time he says Arrietty, like someone who is still trying to figure out how to pronounce it. Burnett is good but she only gets to play to her strengths later in the film so it's slightly disappointing. When she does she's great and becomes one of the more memorable characters but it does have a feeling of slightly too little too late.

Besides what I've mentioned though the film doesn't really have many other problems. It's animations are colorful and lush with great detail, the score is beautifully done and I found myself humming it after the film and it's well paced, which is key in a kids film because you don't want them to lose interest halfway through. There is a slight hitch with mouths and their delivery but as someone who watches a lot of Japanese dubs, unless you're really looking at the mouths intensely you probably won't notice. The only time is once during a sigh but once again...only if you're looking.

Overall though The Secret World of Arrietty is a great take on a classic novel with lush animations, a deep and well written story that doesn't talk down to kids and has pretty decent acting across the board. It draws you in and it's easy to get lost in the world of the borrowers and it leaves you hopefully feeling better than when you went in. Great for the whole family and Studio Ghibli fans alike.