Even at my age, in my work... I haven't reached perfection. 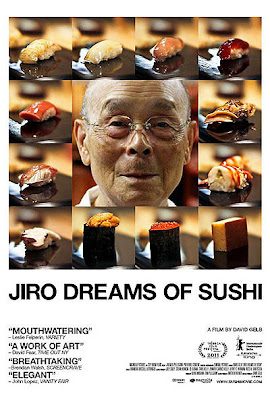 Deep in the heart of Tokyo, in a place where you'd never expect it (in a subway station), sits one of the greatest restaurants in the entire world: Sukiyabashi Jiro. To the untrained eye it looks like a simple family-owned sushi shop but to everyone who has ever eaten there, they can tell you it is anything but ordinary. Run by Jiro Ono and his son (with another location also run by one of his sons), documentary filmmaker David Gelb takes a crew inside this 3 star Michelin restaurant so that we can get an idea of who the man behind the counter really is. 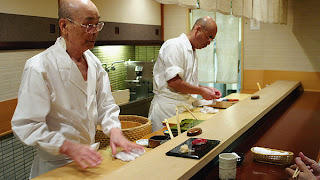 Though regarded by many as the best sushi chef alive, 85 year old Jiro believes that his quest to perfect the art of sushi will never end. He dreams about it, spends almost every waking minute thinking about it and meticulously crafts every piece of fish as though it was Van Gogh painting one of his masterpieces. He loves his work, and deeply cares about it in ways that most people wished they could care about anything. The hard part, and one of his struggles, is dealing with what will happen after he dies. His son works diligently beside him, Jiro taking plenty of time to teach him and help him in whatever way he can, but at the end of the day Jiro will always be the master chef. He's a one of a kind and many believe that his son will never live up to his fathers reputation. Will Jiro's son ever surpass his father? Will Jiro's quest to perfect the art of sushi ever end? What of his other son, who runs a similar restaurant but in a fashion that is exponentially different than his father? These and more are questions we are presented with as the film goes on. 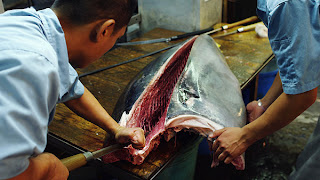 Jiro himself, as well as his son, are fascinating characters who are extremely passionate about what they do. You can see that they pour their heart and soul into everything they do. Jiro especially is fascinating to listen to because the way he describes everything, from making sushi to the art of sushi is intriguing and heartfelt. You feel his struggles and his hardships because you really care about him as a person. If you can get behind and care about the subject of your documentary then you've done a good job.

Love or hate sushi, Jiro Dreams of Sushi is a brilliant documentary and one that should be enjoyed by everybody.