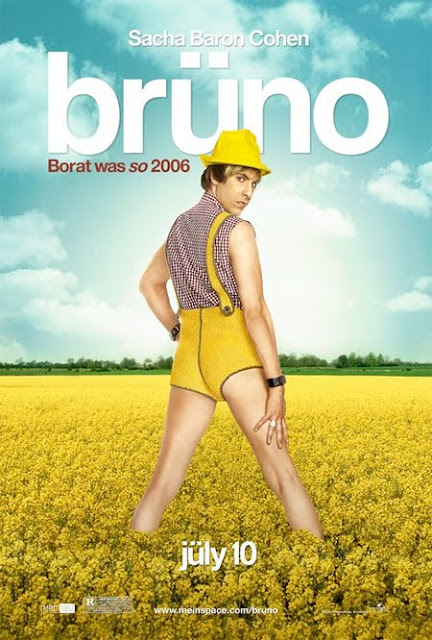 Vassup? Ich me ze Movie Encyclopedia! If no one else vil see ich, zen i vil!

Ok enough of the dopey Austrian/german accent. If you couldn't tell by the poster, right now I'm reviewing Bruno. I saw Bruno on 7/18/09. And that 7/18 will be one I will never forget.

I've been to plenty of movies in my life. Even though I did suffer from theatrophobia at a young age (fear of theatres) I was able to fully overcome it in 2004 when I watched Phantom of the Opera. But this isnt my life story or the review for Phantom but a review for Sacha Baron Cohen's new opus: Bruno. Bruno is the tale of the most popular man in Austria who ran the most succesful fashion television show in the world. After a bumbling mishap at fashion week, he was shunned by the fashion world. Along with his assistant, they travel to America. Once there he tries to become the biggest star in Hollywood, get his own show, and be all that he can be. There is only one big problem: He is gayer than the sky is blue. Now that isnt normally a problem. We have plenty of homosexual people in the USA. His problem is he is SO out there over the top gay that its uncomfortable to the masses. Its told in a documentary style with him narrating his voyage to stardom. 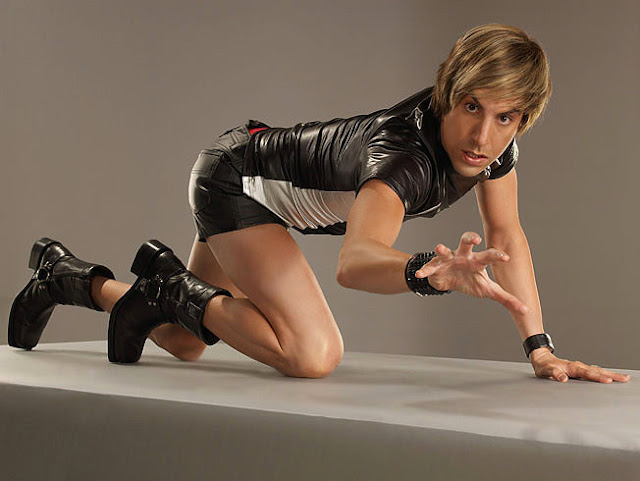 This is where the movie's first problem comes in. His gayness. He treats everyone with such dissrespect and he is so socially akward, lewd, crude and rude. And instead of admitting that he is a bad person, he expects us to believe they are only acting like that because he is a homosexual. Now I am ALL FOR equal rights and I happen to know a few homosexual people too but this is way over the top. NOBODY IS THIS GAY. It would be one thing for him to be a homosexual man in America and than point out the fallacy of the American people by exploiting their inner homophobe but he treats it like a joke. With Borat (which this movie is oddly similar to and not in a good way) it showed our racism towards aliens and people who we dont know or who arent normal. I personally didnt care for Borat but I appreciated its rich social satire and left the movie enlightened...and disgusted. With Bruno it was only the latter.

Sure its funny when he goes to a swinger party and pretends to be straight. Its funny when he goes on a talk show and exploits his child in a gaybaby shirt. Its funny when he learns self defense classes against other homosexuals (hence the quote) and its funny when he enlists in the army. But that is about it. Its really dry in some places and some of their big jokes are really just attempts to showcase Bruno's fearlessness by putting his penis on television and making it talk. If you havent noticed though all of the jokes focus on one thing: THAT HE'S GAY! 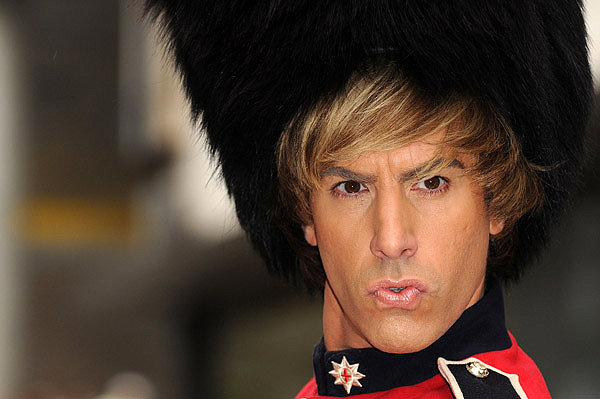 It was a funny punchline every now and again but his gayness got tiring. It was the main punchline of every joke. The only two non-homosexual related jokes were when he tried to make peace in the middle east and when they were doing a child photo shoot (showcase Toddlers & Tiara-like parents) Those were good political and social satires. Everything else was gay jokes.

Bruno is like the kid who screams I'm gay in a southern bar and tapes the reactions. Instead of pretending to be straight and getting a Michael Moore-esque secret answer to show their homophobia, he runs in guns ablazed wearing assless chaps with a naked main wearing a collar and Bruno holding his leash.

If you watched the trailer then you've seen all the funny parts and all the good stuff. Congratulations I saved you 10 bucks. I'd reccomend it if it would had more satire and good social commentary instead of "Look at me Im gay" jokes.