Captain, I wish to report a mutiny. I can name fingers and point names. 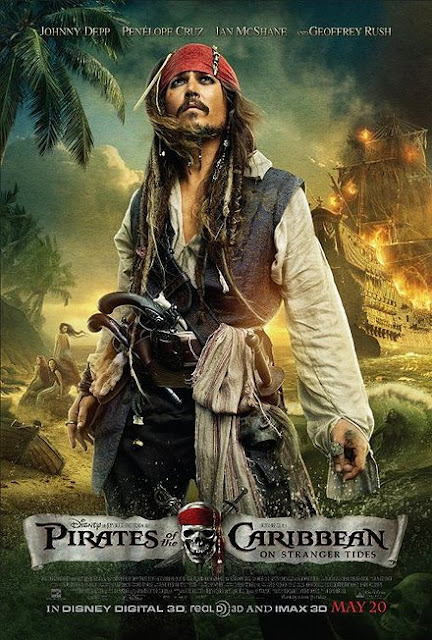 Ah the Pirates of the Caribbean films. What a relationship we have together. The first one was a fantastic and memorable film that hold sentimental value as the last movie my grandfather watched with me before he died, the second was my first midnight film and my first giant anticipated disappointment and the third one was a confusing mess that only got worse the more and more I watched it. Despite the second and third films downfalls I still openly admit that I like the film series, if nothing else than because I love pirates and I was looking forward to the inevitable sequel that was to come.

And what do you know they made a sequel. Big surprise I know. And this one is without Bloom and Knightley, directed by Rob Marshall and loosely based on a book. Big changes to a series that has so far only been loosely based on a Disney theme park ride, but changes I think for the better. Bloom and Knightley (as much as I like them separately) were a big part of what I didn't like about the first three, Rob Marshall is great at big, epic, flashy films and the films needed a more centralized story as the other big part I didn't like about the first three was how confusing it got the longer it went on. And these changes DID end up helping the movie because, while not as good as the original, On Stranger Tides is a giant leap forward for the series and a good sign of things to come. 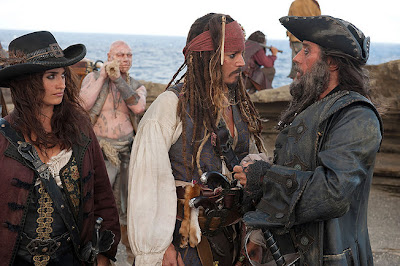 The story of course follows the adventures of Jack Sparrow but this time he is searching for the mysterious and elusive Fountain of Youth, which he claims to know the whereabouts of. Problems arise though when the King of England (with Barbossa as captain), Spaniards and Blackbeard all want the fountain as well. Jack ends up "teaming" with Blackbird, partially because he is totally insane and powerful and partially because he still has feelings for his daughter Angelica (who he happened to date and ditch many years ago...something she didn't appreciate). Their task: find a mermaid, get her tears, get the chalices of Ponce de Leon and travel to the mysterious island at which the fountain is apparently located.

The story is surprisingly good considering the previous two films. It's still a long movie (although much shorter than the last one) but it's more focused, better paced, and a lot easier to follow than previous two. There are a few plot holes here and there and the writers took a great deal of liberties with the material it was based on (loosely doesn't begin to describe it) but I can remember everything that happened in the movie and can explain it without having to put a lot of disclaimers or notes in between. Most of the main characters are well developed and you really start to care about some of the other non Jack and Barbossa related characters. It's also quite action packed as well which is great for a summer blockbuster like this. 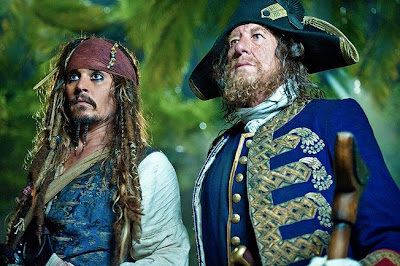 The acting is mostly good across the board with only a few bumps here and there. Johnny Depp IS Jack Sparrow, down to bone and you either love it or you hate it. I love it so he was really easy to love. Same goes for Rush. Hot off The King's Speech (which makes his role all the more funny in a way) Rush is as talented as always and really seems to love playing Barbossa. Penelope Cruz as Angelica and Ian McShane as Blackbird are quite good as well, Cruz being sassy and surprisingly understandable for once and McShane doing what he is (in my opinion) best at: playing a bad guy. He is devious but you love him all the more for it. Most of the supporting cast is fairly good but certainly forgettable and get totally swallowed up by everyone else. I can't remember any one supporting character over another, something that kinda bums me out.

Also I have to say, Disney has now made me afraid of mermaids. Thanks a lot Disney. My first crush was Ariel and now I know all she wants to do is drag me down to the abyss and eat my face. *Sigh* But then again who would have thought mermaids could be evil? 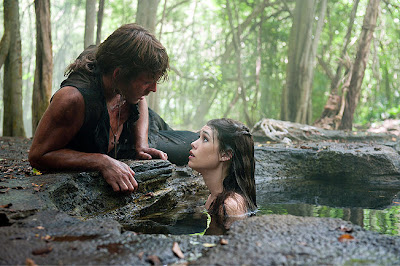 Overall On Strangers Tide is a much better, more focused, mostly well acted film that is entertaining from beginning to end. If you don't like Jack and Barbossa you will obviously hate this film and it does put your butt to sleep with its long length but it's action packed and entertaining summer fun that gives me hope for the series.