"You should kill each others bosses." "Like Hitchcock's Strangers on a Train right?" "Yeah the Danny DeVito movie. That's a funny one. 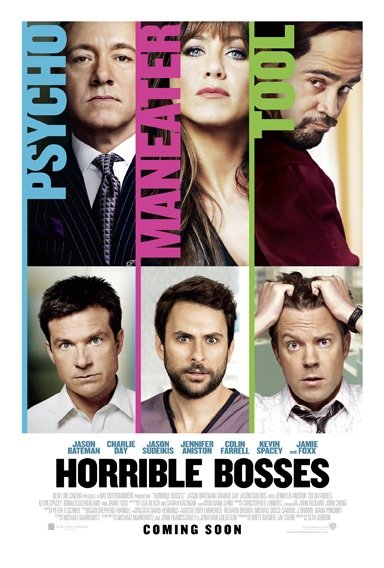 This film, on paper at least, is a dream come true for me. Take the idea from one of my favorite Hitchcock movies Strangers on a Train (two people want to kill somebody so to keep from getting arrested they kill the other persons person), add in one of my favorite comedic actors (Bateman) and two of my favorite current television comedians (Charlie Day and Jason Sudeikis), throw in one of the greatest character actors ever (Spacey), an underrated Irishman (Farrell) and a chick I've had the hots for since I was 10 (Aniston), mix them all together and put them in a comedy directed by the guy who made my favorite documentary of all time (Seth Gordon) and you got a film that was tailored made for me.

My personal bias aside I can safely say that Horrible Bosses (so far at least) is the best comedy of 2011. The humor is non-stop, the acting is brilliant across the board, everyone compliments each other, the story is silly and dark but never feels over the top or too macabre, and is one of those movies that I can see over and over and will still probably miss a joke. I dare someone not to have fun while watching this movie.

The story follows three guys who all have really terrible bosses. Dale (Day) is a dental assistant who is consistently  sexually harassed by his boss (Aniston) but can't get a job anywhere else because he's a registered sex offender (peeing near a playground at night). He's tired of being abused and blackmailed and won't give in to her advances due to him being engaged (and faithful). Kurt (Sudeikis) HAD a great boss but when he passed away his son, (Farrell) an out of shape, coke addicted sociopath who wants to run the business solely for the money, took over and is making his life a living hell. He's tired of sitting idly by and watching as a company that his father loved gets run into the ground. And there's Nick (Bateman), a man who so desperately wants a promotion but to do so has to go through his recently self-promoted (at Nick's expense by the way), verbally abusive boss (Spacey) who loves nothing more than toying with Nick.

All three men are tired of their bosses and one day decide they've had enough and want their bosses dead. But of course none of them are smart, cunning or intuitive enough to pull of such a deed so they get the help of Dean "Muthaf****r" Jones (Jamie Foxx in great form) who springs the idea on them of killing each others bosses. They think this is a great idea and decide to run with it. And, as you would expect, they suck at it, which makes it all the more funny. 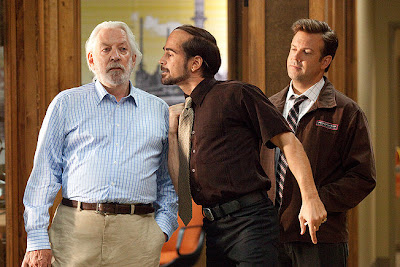 We've seen this kind of story done before and arguably done better, but usually in a more dramatic light. The script is well written but definitely benefits from having it's cast not only be great at improvising but fitting the characters perfectly. Other actors could have made this movie over the top, cheesy or fall flat in some of its more subtly funny moments but having Bateman's dry wit, Day's high pitched overreactions and Sudeikis's charm and timing lift this script up to make it all the more better. The script is also hilarious but by now I think that goes without saying. There were times where I was near tears laughing so hard watching this movie.

On a critical note though I will say though that there were times during the film where I wish there was more time spread out between the different bosses. It's not that I don't love Spacey but I would have loved to see as much of him as I would Aniston and Farrell. But that's more of a personal taste thing and not really a knock on the film. As it stands the film flows quite smoothly, only hitting the occasional bump on the way to the end and really I wouldn't change anything. I loved it from beginning to end. 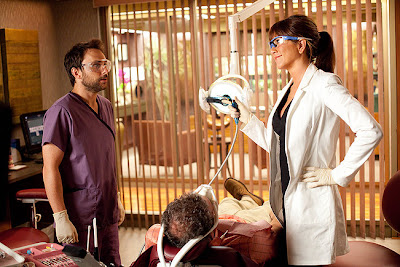 On the acting side I think the biggest breakout will definitely be Day. As a devout It's Always Sunny in Philadelphia fan I've been a fan of his for a while but I'd be willing to bet that a lot more executives will be ringing him up in the near future. Bateman and Spacey are old hat at this now and they do their best them throughout the whole movie. Bateman is the dry, deadpan voice of reason that gets laughs when you least expect it and Spacey is as shark like as ever being totally evil but at the same time totally awesome to watch. Sudiekis is definitely one of the reasons I still watch SNL and he is hilarious as ever in this movie. In fact I think he was funnier here then he was in Hall Pass. One aspect of his character doesn't really sit well with me (Sudiekis=ladies man? HAHA) but overall he's fun to watch. Aniston and Farrell really surprised me in this one. Aniston, who has kind of been struggling lately with her roles plays the nympho dentist well and seems to actually be having fun with the movie, which is always refreshing to see. And Farrell is barely recognizable in a bald cap and with so much weight added, but his toolish behavior is hilarious and it's nice to see him let loose a little.

I honestly couldn't have been happier with this movie. Ever since I saw the first trailer I had high expectations for it and those expectations were met and more. The acting and humor are perfect and while the story is something that has been done before and the movie doesn't bring any revolutionary new thoughts or ideas to how movies are made, it's fun, funny and it's one that I think will only get better the more I watch it. Hopefully you all enjoy it as much as I did.