Your story may not have such a happy beginning but that doesn't make you who you are, it is the rest of your story, who you choose to be. 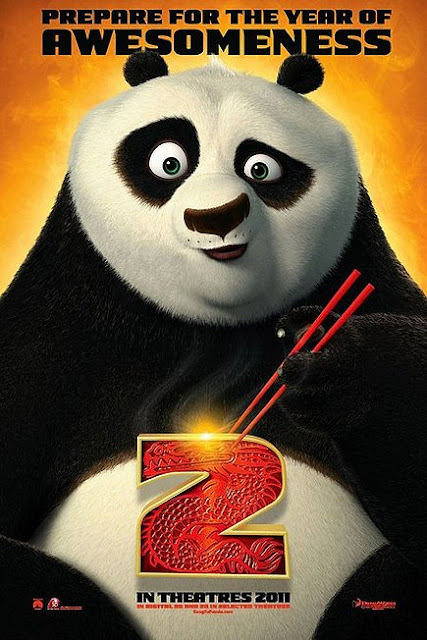 For some reason, maybe it was because it was a busy time of the month or maybe I just HAD to see another movie week after week but I never actually had the opportunity to go see the original Kung Fu Panda when it first came out. Still to this day I have yet to see it, which considering how much I loved Megamind (another Dreamworks Animation film I didn't see until much later) is kind of sad. But lo and behold the people at Dreamworks Animation must have heard my sighs of disappointment because before I knew it a sequel was announced. Now usually I don't like to see sequels before having watched the original but because of the publicity surrounding the film and because of my playing of the video game cash in I already knew most of the goings on in the original film. Needless to say I wasn't going to be totally lost.

It was a 10:00 AM $5 dollar show and the audience consisted mostly of 2 year olds and grandparents (I opted not to see it in 3D which is probably why that crowd was there). Despite being so early it was still pretty packed so I shoved myself into a corner and reclined my chair and waited for the film to start. I expected it was going to be your typical family friendly fare but with some nods to adults, nothing special but not a waste of time. Surprisingly I thought it was pretty darn good. And for people like me who missed the first one, this film stands on its own two feet and provides a great story, regardless of whether you've seen the original or not.

In Kung Fu Panda 2, the story focuses around Po (Jack Black) trying to save the world from Lord Shen (played by the delightfully evil Gary Oldman). Lord Shen is a peacock who many years ago tried to turn fireworks into weapons (cannons and the like) so that he could be the ultimate ruler over all of China. One day he went to the soothsayer to check and see what his future holds and he learns that one day he will be defeated by a warrior of black and white. Assuming that's pandas (then again that fits the description) he wipes out all the pandas in China (or at least within a reasonable distance) and because of his actions he is banished. He doesn't take too kindly to that and vows that he will have his revenge.

Fast forward many years and Po, the hero from the original (and a panda), is still learning what it means to be the Dragon Warrior. His lesson for today: Inner Peace. Of course Po thinks that's easy but it turns out to be harder then he thought. Not soon after a village is attacked by wolves and all the metal is stolen. Po and the Furious Five almost won but because of a symbol on the wolf leaders shirt, he has a Vietnam-esque flashback that causes him  to freeze (it happens to be of Lord Shen annihilating his village). Po and co. soon learn that Shen has returned to destroy kung fu and it's up to them to stop him.

First off, KFP2 is a beautiful movie. The art design is beautiful and even wide landscape shots are almost as breathtaking as their real life counterpart. I give some major props to the animation studio for that. Add in a great soundtrack and the whole feel of the movie is really quite good. But that's just the feel. What about the story? The story is pretty good, if not a bit generic. The film doesn't take too many risks (I can't really fault them because 2 year olds probably don't want Inception), the writing is generic and predictable and it's a pretty standard hero tale that we've seen before at least a couple of dozens of times (and done quite better), but the film is still fun to watch.  It's familiar but friendly enough that you want to go on that ride again.

The acting is good although I will say everyone gets swallowed up by Black and Oldman. They eat up the scenery in every scene and unless you're paying attention it's hard to even notice the other A and B list actors who have come on to the project. Now that does definitely bum me out, as looking at the IMDB for it shows SO much talent (including a small JCVD cameo) but it really IS their film. Black is in typical shape as the over the top, emotional goofball that he always is and at this point you either love that or you hate it. I love it but I know a ton of people that don't. Oldman on the other hand is SO deliciously evil that every scene he's in draws you closer and forces you to watch it slowly unfold. Oldman has great control over his voice and is a very talented voice actor. Even though he's the villain, you may find yourself inadvertently rooting for him from time to time, just because of how awesome he is.

Overall Kung Fu Panda 2 is a generically told hero's quest but it benefits from having great visuals, good acting from Black and Oldman (sometimes to the detriment of the rest) and lots of action. If you have kids they'll probably love this, I say it's worth seeing if you're interested at all in it.