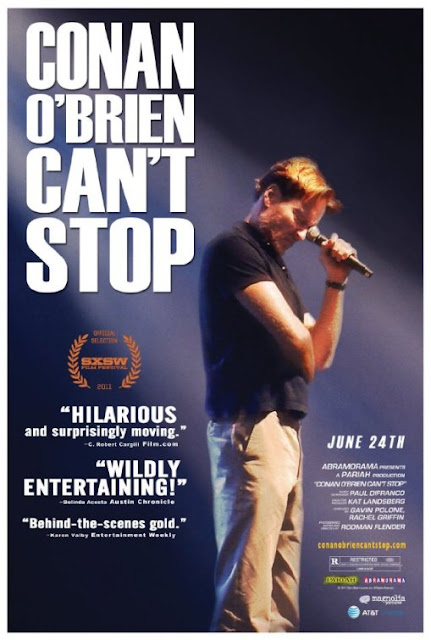 Ever since I can remember I have always loved watching Conan O'Brien. Not only was he a fellow ginger, but day in and day out he got more done in one day then many people do in a week. But besides a few rehearsal videos on his website and the occasional interview, we don't really tend to see a lot of what he does behind the scenes. We see the calm, cool, collected funnyman in front of the camera but we don't see the hardworking, stressed out man behind the scenes. A lot of work goes into hosting and co-writing a daily television show that's not only supposed to make people laugh but also inform people of that days goings on. And when the carpet was pulled from under him when he refused to be put on at midnight, he was forced to try to find something to do for the time he wasn't allowed to be on television. Because Conan can't stop, he won't stop. 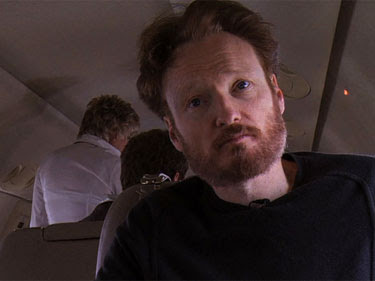 The documentary takes us behind the scenes of Conan's journey away from the screen. During that time he went from city to city on his "The Legally Prohibited from Being Funny on Television" tour in which he did comedy, music, variety acts ect. Anything to please his fans who love his work. We see his writing process, his traveling, parts of the shows, basically every aspect that went into his life during that time. But it's not all sunshine and roses. Despite Conan constantly cracking jokes, he gets mad, well more cranky then mad but still mad, something we don't really see that often from him. He worries, he fusses, he's a perfectionist at heart and when there is so many aspects to pulling off a great show, it eats at him. But he has fun in the end and even the worst of moods is brought up by the people who love him. 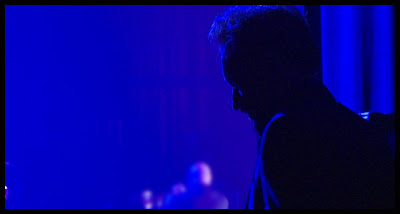 This is a fascinating documentary and even if you aren't a fan of his you will love this documentary. Conan is very raw and human at times in this movie, and some of the moments where he lets his guard down in front of the camera are some of the best moments in the whole film. He's a man who puts on a smile day in and day out and yet you can see the cracks. But he loves what he does and that's why he keeps doing it. Rodman Flender does a great job of telling a cohesive story (from conception, to planning, to the eventual execution) and making everything feel organic. You feel like you are hanging out with Conan and getting to know the man better. Very little feels staged or fake. It moves at a brisk pace, and doesn't linger on any unnecessary moment. You breeze through this movie and before you know it, it's over. I wish it could have gone on longer.

Can't Stop is a revealing, beautifully done documentary on one of television's most beloved icons. If you love him you will eat this up, and even if you don't you will become a fan by the time the movie is over. Definitely one I plan on watching again and again for many years to come.

Email ThisBlogThis!Share to TwitterShare to FacebookShare to Pinterest
Labels: documentary, Own it