Do you want to tell a cop about it? We're just like priests except we would tell everybody afterwards. 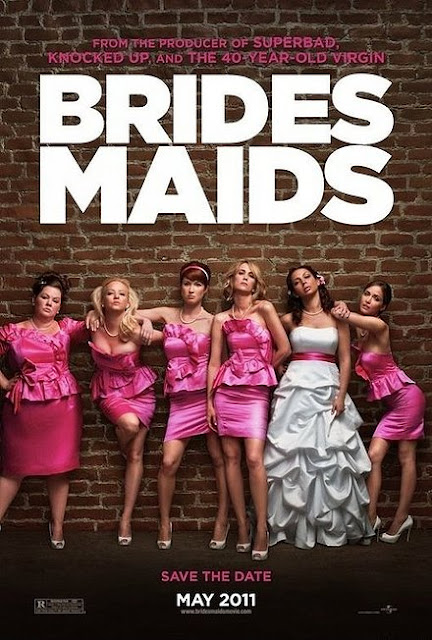 Hello I am the movie encyclopedia and if no one else will see it, I will.,

I genuinely thought I was going to love this film. My best friend, my family, my fellow bloggers and critics alike have seemingly fell in love with this movie calling it one of the best R rated comedies of all time. I even bought the poster in anticipation for what I thought was going to be this epic comedy that everyone kept telling me was one that I couldn't miss. So I went in on a Saturday morning, partially because it's cheaper in the morning and because I had plans later that night, and was prepared to be blown away. So what did I think?

I really hated this movie. I honestly can't see the appeal of it at all. I mean I love the cast and watch or have watched them all do comedy before really well but here I just found myself counting the holes in the tiles on the ceiling and checking my watch every five or so minutes (and by watch I mean phone). I mean it does have its really funny bits. Bits that are grab your side funny. Bits that should make me love the movie. But upon second viewing (I was forced to go again because people thought I was crazy) those bits weren't that funny anymore. They got a slight chuckle out of me but that was about it. Besides those bits though the film was excruciatingly boring, awkward and clumsy. Every time I thought I would start liking this movie, something really stupid (and not in a funny way) would happen and I would sigh in frustration. It's a shame too because I really wanted to love this film. 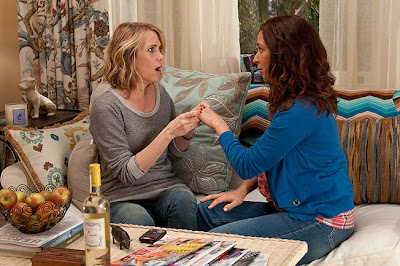 The plot follows Annie, a thirtysomething who's life seems to be stuck in a rut. Her best friend Lillian is always in Chicago working, her bakery went under which left her practically broke, her relationships leave her feeling more empty inside then when she was before and she lives with probably the creepiest people to ever walk the Earth. One day Lillian reveals to Annie that she is engaged and needs her to be the maid of honor. At the bridal shower Annie meets the rest of the bridesmaids which consist of: Becca, a peppy, innocent girl that works with Lillian, the groom's abrasive and blunt sister Megan, her apathetic and cynical cousin Rita and Helen, the vain, petty, superficial wife of Lillian's groom's boss. Together they all go through a whirlwind couple of weeks, where things only seem to get worse before they get better.

Just writing the plot and reading it out loud to myself (a habit I always do) made me realize that I should have liked the story a lot more than I did. It's fairly straightforward in it's structure and it doesn't deviate from anything that we haven't already seen before. The problem I found though with the story was the bits I mentioned before and how the rest of the movie's pacing is handled. Yes they were funny the first time but they felt more like bits you would see on a comedy show instead of something in a cohesive movie. And when the bits weren't going on, 90% of the time I was bored out of my mind. The bits are spaced out too far and since this film is already over two hours long, it makes it all the more tedious to sit through. On top of that some of the bits don't work. There is one early on at the bridal shower which is basically a game of one-up between Annie and Helen. Not only was it not funny, but it went on for way too long. 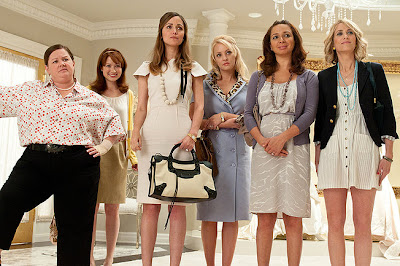 The film also really lacks any real bite. I know Judd Apatow had his hand in this film and even when he's producing his touch can usually be seen throughout but this time I couldn't really see it. I mean there is one gross out scene midway through the film involving a bridal store but otherwise the film is extremely tame in terms of an R rated comedy. I mean there are some surprising swears thrown in (only one of which works the other comes off as petty) and a pretty tame but funny sex scene but for the most part it feels like it could have been PG-13. Now I'm not saying the film has to be this swear every three second vomit fest, but look at Mel Brooks films compared to this. His films had so much more bite and pizazz that they still remain classics to this day. Besides a few lines from Megan, the film really lacks any memorable one-liners or memorable anything.

But there ARE positives in this movie and there names are Kristin Wiig, Chris O'Dowd and Melissa McCarthy. Even when the film is at its worst, Wiig keeps, or at least tries to keep, the mood light and tries to work off the others as best as she can. As an accomplished comedian her experience shines in this movie and her physical humor and mannerisms are undeniably charming. Sometimes not everything she does clicks and that just adds to my frustration as I'm watching but overall she does the best she can in this movie. But Wiig is definitely outshined by O'Dowd and McCarthy, who end up taking the film and running away with it. O"Dowd plays Officer Rhodes, the love interest of Annie and a State Patrol Officer and no matter how bored I was, he made the scene better. His dry Irish wit, his emotion he shows in some of the more heartfelt scenes and his charm are great and I really hope to see more from him in the future. McCarthy plays Megan and like I said in the previous paragraph, she delivers most of the memorable lines in the film. She's brash, rude, and abrasive but also very kind and compassionate. McCarthy plays the character perfectly and like O'Dowd I hope her star can only shine brighter. 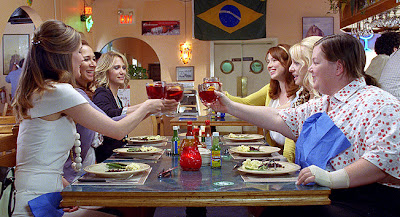 In the end though I just didn't really like Bridesmaids. I won't argue with you if you did, because I can see how people would like this film, but to me it just fell flat on almost every level and was one of the more boring comedies I've seen in a while. There were some bright spots that kept it from being a total bust but those bright spots are like finding a needle in a haystack sometimes. I wanted to love this seemingly beloved comedy but that sadly will never be the case.