21 Jump Street. What John Carter should have been(a good movie). 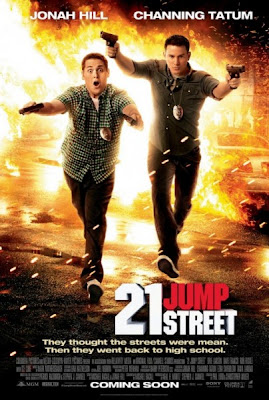 Channing Tatum may one day be considered a great actor. Yes, he has been quite terrible. I’ve never seen those Step Up movies but they looked terrible and he looked terrible in them. He wasn’t very good I that overly self-indulgent film A guide To Recognizing Your Saints, a movie that is a director going “look at my childhood, I grew on the streets. In fact, it was kind of like Mean Streets only not as entertaining and nothing really happened except the boring things that happen in real life.” Even in GI Joe, a movie I actually quite like, I think he’s pretty bad in it. But when I saw a trailer for last year’s The Dilemma, it looked like maybe he’s learned. Maybe’s he’s learned that his calling isn’t being some hunky guy, it’s in being funny. Granted I never saw the film, it got horrible reviews but I heard he was funny in it. Two months ago, Haywire. He had nothing much other than a supporting role but he didn’t just do his duty, he was good. And now, 21 Jump Street he is what makes the movie. The fact is Channing Tatum is evolving, and if this rate of evolution continues, great things may happen. He’s already set to star in the next two Soderbergh films and if Soderbergh sees something in him, well, there must be something in him. Of course he was also in Public Enemies in which he was shot in the stomach by Batman before he had the chance to utter a single line. 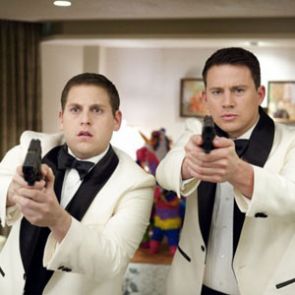 Jonah Hill on the other hand is someone I’ve only found moderately funny and unlike Tatum, has never shown any evolution. Somehow we know live in a world where Jonah Hill is an Oscar nominated actor. Jonah Hill. Oscar nominee. In a movie where he was just kind of just Jonah Hill. Kind of ruins the idea of being an Oscar nominee. I doubt Soderbergh would ever cast him in any thing, even as a comedic role. Now he’s sort of skinny Jonah Hill but still fat looking. Looks like he didn’t keep up with his Lypo. He’s sort of skinny but he’s still got a fat head. He’s like a white Al Roker. 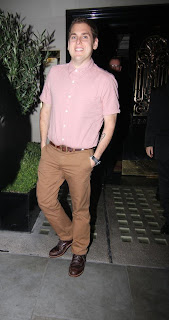 As a pair these too work, but it’s still Tatum that makes it. The basic plot: two young cops must go undercover in a high school to uncover a drug ring. I never watched an episode of the TV show, so I couldn’t say how faithful it is to the show. Yes, those cameos are here in the film. The two pretend to be two new students with Tatum’s plan to get in with the popular kids as he was a popular kid back in the day, but of course, he ends up becoming friends with the nerds. The dealer of this new drug HFS(Holy Fucking Shit) is played by James Franco’s brother Dave and sometimes in can be a bit distracting at how much he looks and sounds like his brother. Franco of course has a girlfriend, who is played not by a super hottie as one would almost expect but an actual regular attractive girl. Although that may have been done because, well she and Jonah have to get together. 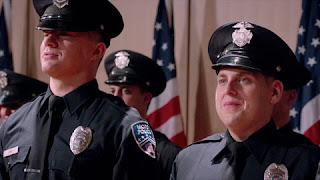 The basic structure of the film is like any buddy cop film, including the falling of the relationship between the cops. There is some quite decent action in the film that had me more excited than any of the action in John  Carter, but this film is working on lower expectations on the action which gives it a leg up. Although when people get shot, it’s the ever so horrible CG blood. It looks like a fucking cartoon. 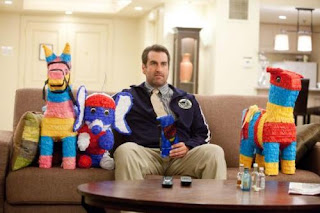 The Office’s Ellie Kemper and future mother of my children plays an Chemistry teacher who has a crush on Tatum’s character not as much is done with it. Instead she’s just kind of there as that one girl from Bridesmaids. Oh well. Rob Riggle plays a coach always carrying a bag of Cool Ranch Doritos and does his usual stick which I always get  a kick out of but, let’s face it, Riggle doesn’t have much range. Ice Cube gets some nice laugh as the angry black captain or, I’m not actually sure what he is but he’s the guy they report to. Sadly though, Parks and Rec’s Nick Offerman/Ron Swanson is only in that scene that appears in the trailer. You can’t always win. 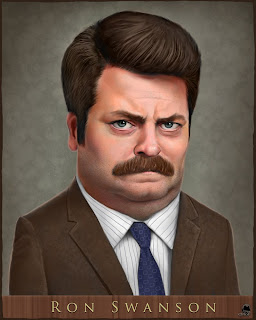