If you're going to take an R Kelly song literally why not "Trapped in the Closet?" Nobody broke their neck trapped in the closet. 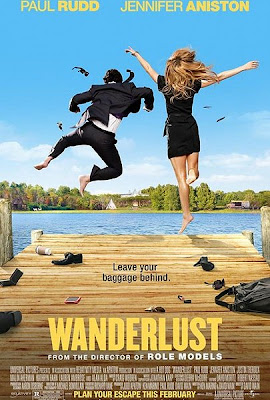 Wanderlust is what I like to call a conflicted comedy. On one hand it's a stupid funny comedy about a couple dealing with their issues through a means that they aren't used to (in this case a hippie commune). On the other hand it's a spoof of said commune and all of hippie culture in general. When the film focuses on the former it's sweet, funny and a lot of fun to watch. When it's the latter, it's painfully bad for the most part. Where I'm having trouble is whether or not I should just write this film off as bad and move on, or take what was actually really good about this movie and focus on that and call this a decent, albeit flawed comedy. Really I think it's up to the individual viewer. Paul Rudd can save damn near any movie in my opinion but to some he can come off as a bit much (especially with one scene). But one man can't usually carry a whole movie can he? 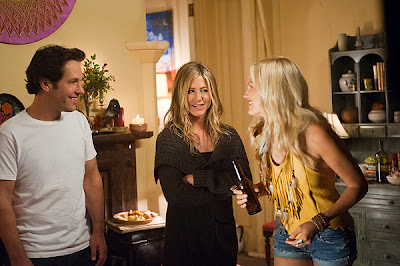 The film follows George and Linda (Rudd and Jennifer "I can't get out of these damn Rachel roles" Aniston) who are a New York couple trying to get by. Rudd is a businessman trying to get a promotion and Linda is a jack-of-all-trades who's now focused on making an HBO documentary on clubbed seals. When both of these things fall through the cracks they decided to move in with George's brother, who runs a port-a-potty business. Before they get to his brother's house though they decide to stay the night at a bed and breakfast/hippie commune. They love how warm and accepting everyone is so much that after a few days with George's brother, they decide to drop everything and become members of the commune. Thanks to comedy writing 101 you can probably guess how well this goes.

It's an interesting, albeit done to death idea but the execution is a little wonky. When it focuses on George and Linda, as well as their budding relationships with Seth and Eva (Justin Theroux and Malin Akerman), two members of the commune, it's actually really funny. Seth is over the top and Theroux plays him with such crazed earnestness that he steals almost every scene he's in. Eva isn't given a whole lot to do besides being ogled at by George, but Akerman is funny nevertheless and is one of the funnier members of the group. Where the problem lies is in the other members of the group.

I love satire, don't get me wrong, but when the "(Insert type of movie here) Films" are more subtle than you are, you're doing it wrong. We get it, hippies get high, eat organic and have some weird sensibilities, we don't need that shoved down are throats over and over and over and over and over again. It gets old after a while and it stops being funny. Sure you'll probably chuckle at some of the more awkward moments, but overall these moments fall flat and are terribly unfunny, which is a shame since the acting from everyone is solid with no real bad eggs. 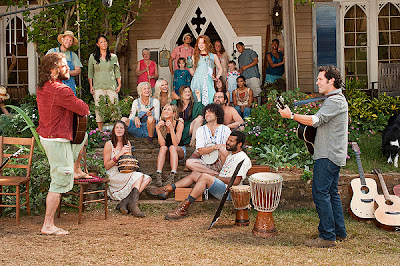 The film's biggest saving grace besides Theroux and the George and Linda plot is definitely Paul Rudd. He is one of the best straight men in Hollywood (and I don't mean orientation) and usually the weirder the situation, the better he tends to be. Even at it's least funny, he somehow finds something to latch onto to make it funny and try to make the scene better. Even when he's by himself he can be hilarious, as evidenced by the funniest scene in the movie where he talks to himself in a mirror. I hate to say that if he wasn't in this, then it would have been an utter disaster, but yeah...it's true.

Overall Wanderlust is a film that suffers from satire/spoof overload, some bad writing, and a lot of dud jokes. Luckily thanks to good acting led by Theroux and Rudd, as well as an earnest and sweet storyline about a married couple and their trials and tribulations, this film isn't a total loss. I'd say it's worth a rental if nothing else.