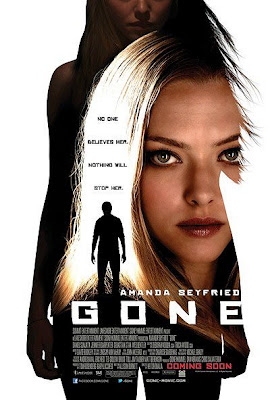 I didn't expect a whole lot going into Gone. While I believe Amanda Seyfried is a competent actress, I'm hard pressed to think of a movie she's been in lately that could be considered "good." Add that to a trailer that made my eyes roll like a tire in the Indy 500 and you have a film that, before I even sat in the theater, I was already dreading. That said, I love to be surprised when I go to the theater and even if the film wasn't "great," as long as it had a decent story and/or acting, I'd be satisfied. Well it has neither. In fact I'd go so far to say that Gone has one of the most confounding, convoluted, piss-poor screenplays I have ever sat through and features bland, phoned-in acting across the board. If 30 minutes into a film I've almost cut my head open from facepalming repeatedly, your film is dead in the water and needs to be taken out back and shot. 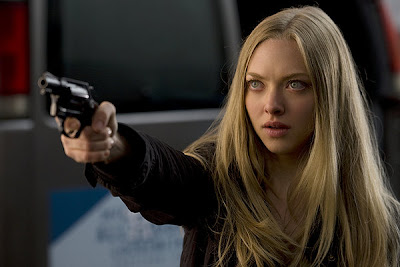 Gone is the story Jill (Seyfried), a waitress at a local diner who lives with her sister. On the outside she seems fairly normal but she has had it rough recently. She was kidnapped, dragged out to the woods, thrown in a hole and right before she was going to get killed, she escaped and wandered through the woods back to safety. Problem is her kidnapper left no traces and so everybody deemed her insane and thought she made the whole thing up. It probably didn't help that she actually did go insane from the paranoia and obsession with the kidnapping shortly after she returned, but I digress. Jill is driven and spends all of her free time looking for the kidnapper, or at least the hole where she was held. After working a long shift at work one day, Jill returns home to find that her sister is missing. There is no sign of a break in, her clothes and everything are in order and on the outside it just looks like she caught a ride to her final that day. What does Jill do though? Goes to the police, claims the kidnapper took her and when they don't help she gets a gun and goes hunting for him.

That's sound logic right? I mean there are more developments that make her theory a little more sound but for someone who is twenty or so minutes into a movie, a mentally unstable woman with a gun hunting down a guy that may not exist for a sister that is probably not actually missing a good film does not make. What's worse is that everything is incredibly predicable and almost every scene plays right out of a fill-in-the-blanks book. I mean I'm fine with some predictability, but when you can telegraph a scene that goes on for a good ten minutes, it's bad and it comes off as padding. AND THIS FILM PADS. I swear they put one scene in towards the end because otherwise the film would only be an hour long. Even when it's a halfway decent scene or a scene that's harder to predict, it's boring, poorly acted and full of holes. Basically you can't win. 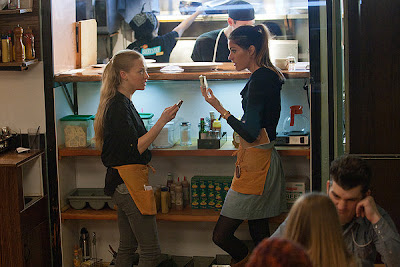 The acting ranges from poor to cardboard and you never really feel invested in any of the characters. Seyfried comes off as manic for most of the movie so it's hard to ever tell if she's really crazy or if she is just desperate to find her sister. They hint throughout it's the latter but it's hard to tell and therefore it comes off like a story told by the crazy cat lady down the street: she's doing her damnedest but you just don't care. Everyone else though is just laughably bad or pure bad. You wonder how some of these people even got work. When Jennifer Carpenter, who's only in the movie for two and a half scenes and doesn't really do much, is your best performance, you are in trouble. Even the villain, who I won't spoil (although the screenplay might as well have him wear a "I'm the bad guy" shirt) is boring and uninteresting.

Nothing in this movie clicks and it's frustratingly bad and downright incompetent. It's full of plot holes, poor logic, useless padding and terrible acting. Even if you love Seyfried, heck even if someone PAID you, don't watch this film. You'll thank me later.

MY VERDICT: ABOMINATION TO CINEMA
Posted by xTJMac510x at 9:36 PM