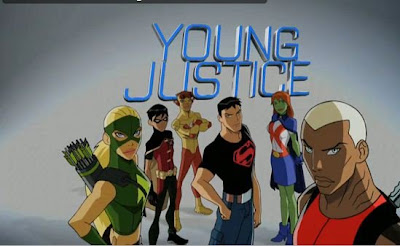 Co-created by  Greg Weisman and Brandon Vietti, somewhere between Justice League and the Teen Titans is where this current saga of  the new DC Animated Universe lies. Instead of focusing on the Big Guns of the DCU, this time around the attention is turned over to the teenage heroes and sidekicks of the Justice League members whom operate as a covert operation team for their mentors. In order to avoid any confusion or continuity questions between the plethora of DC animated series and direct-to-video animated films, its been specifically stated that Young Justice takes place on Earth-16, a place not too much unlike pre-reboot DC universe but with a few subtle and not-so-much differences.

In the premiere episode we’re introduced to four well established sidekicks in this universe: Robin, Aqualad, Kid Flash, and Speedy each of whom vie to ascend from mere sidekick status to full-fledged hero status, unfortunately its met with opposition from their respective mentors(Batman, Aquaman, Flash, Green Arrow) and each of the young heroes reacts in their own way, Speedy in this incarnation is the eldest of these young heroes decides to strike out on his own from mentor Green Arrow and change his name to Red Arrow now operating as a solo hero. Still wanting to prove their worth to their mentors, the remaining heroes engage in a secret investigation of Cadmus headquarters. This leads to the discovery of  Superboy who is a clone of  Superman whom even he isn’t aware of. After the Superboy discovery and the revelation that Cadmus is engaged in creating living weapons called Geomorphs all of which are being manipulated by a mysterious group called The Light, the young heroes convince Batman to create a covert team to operate under his order on situations that the Big Leaguers would instantly be identified. By the end of the episode, a fifth member of the group is introduced-the ever so cute Miss Martian. The group’s headquarters is located within Mount Justice in Happy Harbor.

What sets this show apart from the other DCAU shows is of course its dedication to character development and the fact that not everything will be solved at the end of the half-hour episodes thereby stretching some plots into an over-arching storyline. This series continues the Justice League Unlimited tradition of expanding the DC universe with cameo appearances from characters well known to the very obscure. Over 135 characters have appeared in the series so far (with more on the way!). Also, as to not be confused with anything that comes before or after, its established that Earth-16 is clearly in the early days of the super-hero renaissance. The characters are also somewhat altered yet familiar. The lineup for this series includes so far: 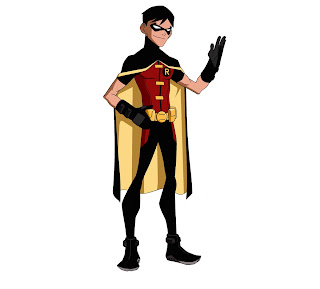 Robin/Dick Grayson - He is thirteen years old in this version and since he’s the Batman’s partner, the most experienced of the group. He shows signs of becoming a great leader in situations where field leader Aqualad isn’t present. 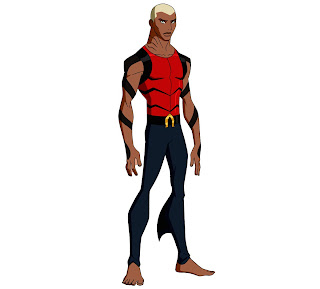 Aqualad/Kaldur ‘Ahm- He is the sixteen year old leader of the Young Justice squad and Aquaman’s partner. He possesses powers of Atlantean sorcery  which include super strength, durability, and discharge electricity through his hands. He’s elected leader of the younger heroes because of his level-headedness in perilous situations and his ability to efficiently deliver orders. This series marks the first animated appearance of the new African American version of Aqualad. 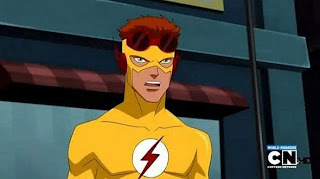 Kid Flash/Wally West- Is the super speedster of the group and partner of the Flash. Wally is pretty much the comic relief of the group and is one of the members who’d love more than anything to prove his worth to the mentor heroes. Wally first has a crush on Miss Martian which he eventually gets over, he also collects items from missions that he dubs ‘souvenirs’. Wally is the only member of the group who knows Robin’s secret identity and vice versa. 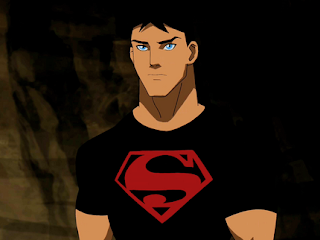 Superboy/Conner Kent- A sixteen-week old clone of Superman grown in the bowels of Project Cadmus, he only contains half of Superman’s kryptonian abilities: super strength, invulnerability, hearing and vision. Superboy’s demeanor is somewhat sullen and ill-tempered due to his reaction to the way he was created and rejection from Superman whom he wished to bond with. He recently discovered half of his genetic makeup is human and the shocking revelation of whom the donor is.

Miss Martian/M’gann M’orzz/Megan Morse- Martian Manhunter’s sixteen year old niece and inexperienced super hero. Like her uncle her powers include flight, telekinesis, telepathy, invisibility, and limited shape shifting. Megan’s rather naïve and upbeat personality was developed from watching earth television programming. She takes the form of the main character and catchphrase from the television program “Hello Megan!”. She and Superboy have developed a romantic relationship with each other, its also been shown recently that in her true form Megan is a White Martian. 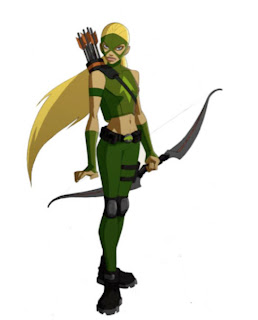 Artemis/Artemis Crock- The most mysterious member of the group. Fifteen years old and like Robin is the teams’ other powerless member. She is adept at archery and her weapon of choice is a bow and arrow. Initially, she introduced herself  to the group as Green Arrow’s niece but Red Arrow knows the truth and admits that if Batman and Green Arrow still want her as part of the group, there must be a good reason. Artemis has yet to reveal her true back round to the team, especially the fact that her sister is the villain Cheshire. 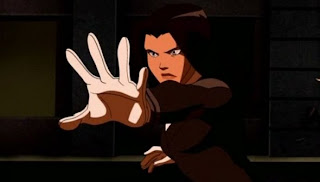 Zatanna/Zatanna Zatara- She is the daughter of Justice League magician Zatara. She made recurring appearances in several episodes until the episode “Misplaced” where her father becomes the new Doctor Fate and this leads to her becoming the official newest member of the Young Justice team. Her powers, like her dear old dad lie in incantations spoken backwards.

More heroes are expected to join the team in upcoming episodes and season two. So far the Milestone hero Icon’s sidekick Rocket has been seen alongside the group in promotional material as well as the current Blue Beetle and character Lagoon Boy from the somewhat related (and long canceled) Young Justice comic series.
Posted by xTJMac510x at 10:22 PM