Daddy, what did they do to you? 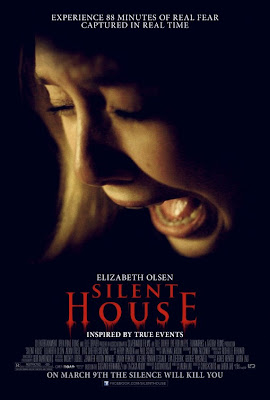 I've started to notice a trend recently and it's one that's been bothering me for some time: a film that is almost nearly impossible to review, or at least properly critique, without spoiling the film. Usually this means the film's big twist or ending is what makes or breaks the film but it also makes it hard to really describe the movie. The reason I bring this up, besides this being a nagging issue for me, is because your enjoyment of Silent House will depend on what you think of the ending. While I could (and will) nitpick some other issues, that's basically the core of it all. But I'll get to that when I get to that. First what is Silent House? 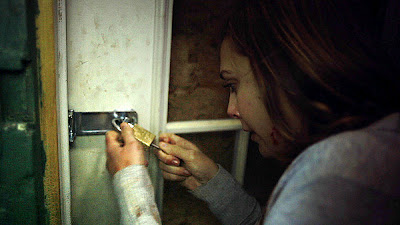 Silent House is a remake of a 2010 Uruguayan horror film of the same name and both films boast being shot in one continuous take. Not to speak ill of either film, but I highly doubt either was shot in one complete take. Instead they both use clever editing techniques to portray the illusion that it's shot in one take. It's an interesting concept to say the least and I quite enjoyed it.

The story of the film follows Sarah, a girl in her early 20s (estimating it's never really established) who is busy doing repairs on a lake house along with her father and uncle. After a small tiff, the uncle drives into town and Sarah and her father are left to continue working on the house. Sarah gets distracted when a friend from her past visits briefly and after agreeing to going out later, she continues working. Things get interesting when she hears a noise and gets her father to investigate. At first things are fine but after another large thump, she finds her father unconscious and realizes she's locked in a house with someone who obviously wants to hurt her and her father.

That's really as far as I can go without spoiling anything. The basic plot doesn't move far beyond that and usually just involves Sarah going from room to room hiding and/or trying to escape. It's only in the last 10-15 minutes does the film radically change and I'll let you figure out whether or not you like it. Me personally? I enjoyed the story but I felt the ending was rushed, unfinished and left more questions than answers which left me with a slightly sour taste in my mouth. It's by no means terrible, as the ending is very reminiscent of Haute Tension, but it feels like it was changed at the last minute to make things more interesting. I'm not damning the movie because of the ending, but just be wary of what you're getting yourself into. 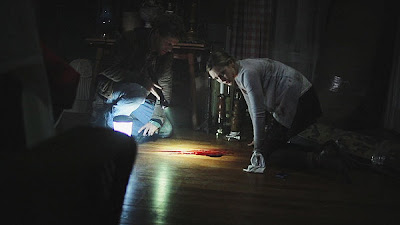 The acting is a mixed bag. Elizabeth Olsen has more talent in her pinkie than her sisters ever had and she is an actress who is definitely going places. She was brilliant in Martha, Marcy, May, Marlene and she's actually really good in this film as well. She could have played the scared heroine we have seen in dozens of horror films, but there is a quiet reserve and a will to survive that she portrays in her role of Sarah that keeps her from being just another heroine. She does have a quirky cry (which kind of bugged me), but otherwise she's amazing, especially considering how the film is made and it basically being a one woman show. Everyone else, however, is really bad, or at least all the people who have speaking roles. Both men are stiff and dull and it really shows when they are in a scene with Olsen as she makes them seem like cardboard cutouts in comparison.

Technically this film is brilliant and deserves a lot of credit for that. The "one shot" method (notice the quotes) is really well done and the edits are seamless. It really feels like it was done in one shot at times. There is also one scene I'd like to point out, as it will probably be in my favorite scenes list next year and it's really quite brilliant. At one point all the lights go out and all Sarah has to light her way is an old Polaroid camera. Each flash is intense and gets more so the longer the scene goes on. It's not a terribly long scene but it is gripping and almost made up for a lot of the flaws.

Overall Silent House is a film that is saved by Olsen and it's behind the scenes work. The controversial ending is rushed and poorly done, both men are terrible in their roles and it'll be very easy for many to write off this film because of those flaws. But I still say it's a solid film and worth checking out anyway.