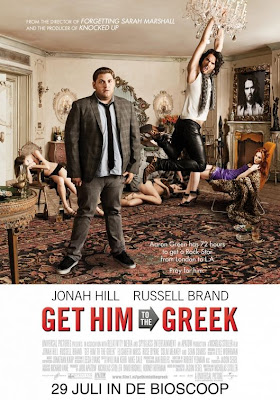 Hello I am the movie encyclopedia and if no one else will see it, I will.
It's hard to deny that Russell Brand has now become a mega superstar. Engaged to pop sensation Katy Perry, lead singer of a rock band, one of Hollywood's most wanted stars and all after dealing with a bad heroin addiction that almost ruined his life. Whether you like him or not he has made leaps and strides I haven't seen in years when it comes to fame.
His big breakout role though, and in my opinion what really put him on the map, was his performance as Aldous Snow in Forgetting Sarah Marshall. The movie itself was only okay, but everybody remembers the hungover, sex crazed mumbling Brit who stole Sarah Marshall away from Jason Seagal's character. Well apparently Nicholas Stoller, the director of Forgetting Sarah Marshall, and Judd Apatow, the every movie producer, decided to take that character of Aldous Snow and give him his own movie. But does this spin-off live up to the fame and recognition that the character it's based off got? Yes...yes it does. 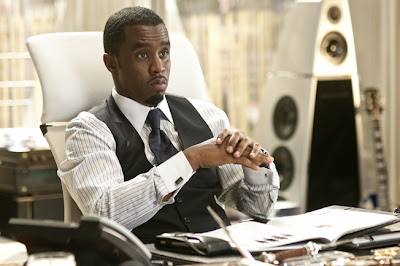 The story follows two completely different people:
The first is Aldous Snow, a rock star who has fallen off the wagon thanks to his latest album bombing. Before his latest album he was the biggest thing in both music and Hollywood. His loud, abrasive music, his sexual charisma, and his ability to do so many drugs and drink so much alcohol that he becomes immune wowed everybody. But then he had a son with his wife and decided to become sober for his kids sake. That and he wanted to take a more spiritual approach to his new album entitled "African Child." It bombed, his wife and son left him and he started doing drugs again.
The second person is Aaron Greene. He is a talent scout at Pinnacle Records, although he seems to get passed up and ignored half the time. Nobody takes him serious but Aaron is driven and wants to make an impact. So what is his plan? Since the record label is losing a lot of money, he recommends getting Aldous Snow to perform a ten year anniversary concert at the Greek Theater in hopes that the Pay-Per-View event, the tickets and the merchandising by word of mouth and Aldous' elusiveness since his last album will get people to come out to the concert. Aaron's boss Sergio agrees on the condition he goes and gets Aldous himself. While all this is happening he's also dealing with a girlfriend who doesn't seem to listen to his needs.
The majority of the movie is spent once these two people get together. Their exploits are the basis for most of the film. Whether it's sex, drugs or the Today Show, they are everywhere doing crazy hijinks. 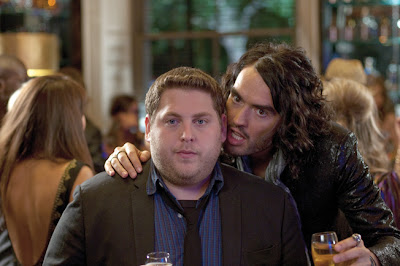 The writing is FANTASTIC. The comedy is a laugh a minute with Aldous saying ridiculous things and Aaron being a serious but silly straight man in this situation. Aaron is an optimist but a cynic with Aldous while Aldous is in some sort of drugged up fairytale. But on top of the laughs there is a lot of depth. We see every side of Aldous, not just the crazy, but the normal, the sensitive and the vulnerable Aldous. And we see the serious Aaron but also the crazy Aaron, the wild Aaron and the Aaron that wants his hero to be great. And the chemistry between the two is amazing as well. These two work extremely well off of each other and accent each other perfectly.
The acting is amazing as well. Brand and Hill bring their A-game and each deliver in every scene. Jonah Hill is a lot more subdued in this film than he usually is (which was getting tiresome) and he is a joy to watch. And Brand is like a sparkly rainbow...you just can't stop watching him. The supporting cast is good as well with the major stand-out being Diddy. Diddy is hilarious and almost every line he delivers is comic gold. I absolutely loved every scene with him in it and when all three are together it's hard not to laugh hysterically. 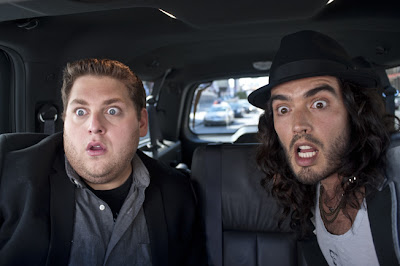 This is an amazing comedy with fantastic writing, great acting and a depth you usually don't see in comedies. Be sure to see this one, and be sure to pick it up when it comes out, you won't be sorry.
MY VERDICT: TOP FILM
Posted by xTJMac510x at 2:30 PM