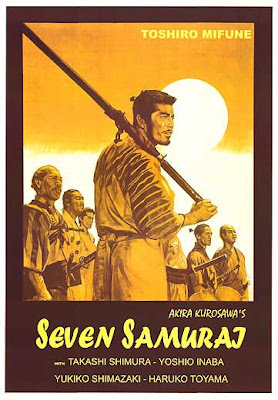 Hello I am the movie encyclopedia and if no one else will see it, I will.
"Favorite Black and White Film." This one was tougher than I expected it to be. So many great black and white films have been released. Battleship Potemkin, Treasure of the Sierra Madre, Birth of A Nation, Triumph of the Will, Casablanca, Citizen Kane, The Gold Rush, It's A Wonderful Life, and many many more. But it wasn't until recently, thanks to Ryan over at A Life in Equinox that I discovered this little gem of a movie he's mentioned once or twice: "Seven Samurai." He could probably talk days about how and why it's the greatest film ever but I can say that it is definitely a great film. Is it my favorite? No. But is it one of the best made? Probably. But it is my favorite black and white film that's for sure.
Posted by xTJMac510x at 3:22 AM