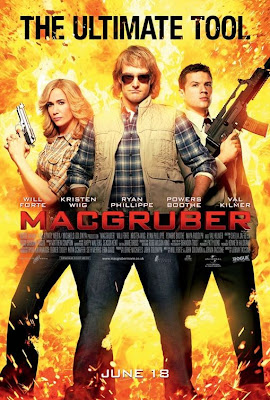 Hello I am the movie encyclopedia and if no one else will see it, I will.
Saturday Night Live isn't really all that funny anymore. Every now and again I'll get a laugh (mostly from the guest actors/actresses) but Saturday Night Live is past its prime. Maybe I'm in the minority but besides Betty White, the musical performances and Andy Samberg the show is on its hind legs. It's sad since there are a lot of really funny comedians in the cast. But the writing and it's attempt to stay current and edgy in an era of Tosh.0 and South Park is really drowning it out.
The movies don't fair well either for the most part. Some like The Blues Brothers, Wayne's World or Night at the Roxbury work but for the most part a 3 minute sketch shouldn't work as a ninety minute film. So when they announced a MacGruber film I was a little disappointed. The sketch isn't that bad, for the thirty seconds a piece they are, but a film seems odd. I mean watch this:

That is the basic idea of the sketch. They are trapped somewhere with explosives, he mimics the idea and the character of MacGyver and he gets himself blown up because he is stupid. Funny for a minute, not for a whole movie. 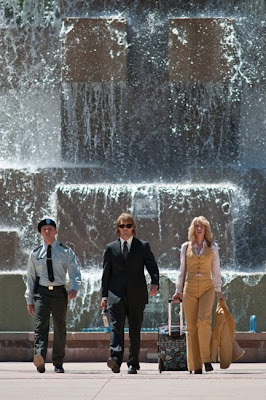 The premise of the film is that Dieter Von Cunth (ha ha it's a c**t joke I bet they won't use that a million times) has stolen a nuclear warhead and plans on bombing Washington D.C. Word gets out about this so Col. Jim Faith and one of his best men Piper go searching for the legendary MacGruber. His wife was killed by Cunth and that sent him into a tailspin. After initially refusing he accepts and gets a team of men. He blows up said team of men so he ends up working with Piper and his friend Vicki St. Elmo. They try to foil Cunth at every turn but he outsmarts them. Eventually though they do stop him and everyone lives happily ever after. 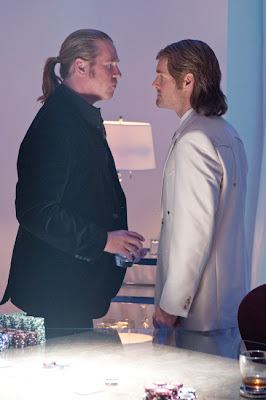 This film is painful. Yes there were some really funny parts (which is why it's not an abomination) but it relies too heavily on shock value and trying to be edgy that it becomes more awkward and less funny. Jumping around with a celery stick up your ass is funny...for a minute. But it goes on for a whole scene. Promising to suck a man's penis as a form of apology is funny...for a few seconds. But he keeps going and going and going to where it reaches Bruno levels of weird. That's the film's problem...it keeps going. That and when they repeat the actually funny things twice or three times, it loses it's charm. The acting is solid for the most part, it's not their fault after all. All of the actors are trying their hardest with what they have but it's just not that good. The effects and the action are cool though!
The writing is the albatross around this films neck and it only proves that a 3o second sketch can't make a good 90 minute film. If you MUST see it, it's kinda funny, but I'd suggest avoiding it.
MY VERDICT: AVOID IT
Posted by xTJMac510x at 3:45 PM