Movie Meme Day 1-Sequel That Should Never have been Made 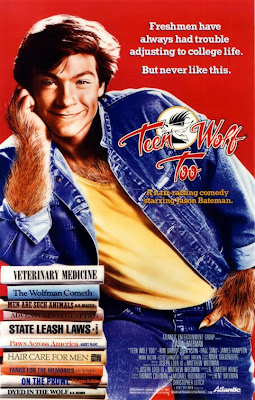 Hello I am the movie encyclopedia and if no one else will see it, I will.
Now I am a glutton for punishment and if I wasn't already busy enough, I might as well make myself busier. Between PAX, the 1 year anniversary and all the other things going on I've barely had any time to sleep, let alone write. But Meme's and Haul's are really easy to do and as soon as I get my camera fixed I'll do more Haul's. But since my TV meme went over so well (or so I think) I figure I'll take on this one, on the one exception that unlike the TV one I am not going to go overboard. Short and sweet posts. I got lots of stuff to do.
The first day is A Sequel That Should Have Never Been Made. It would have been easy for me to say Indiana Jones 4, Matrix Reloaded, Porky's 2 ect but I think since it almost ruined his career and the legacy of the first film I am going with Teen Wolf Too starring Jason Bateman.
Bateman really phoned it in and the story lacked any of the depth, humor or heartfelt feelings the original had. No wonder Bateman went into hiding until arrested development.
Posted by xTJMac510x at 8:27 PM