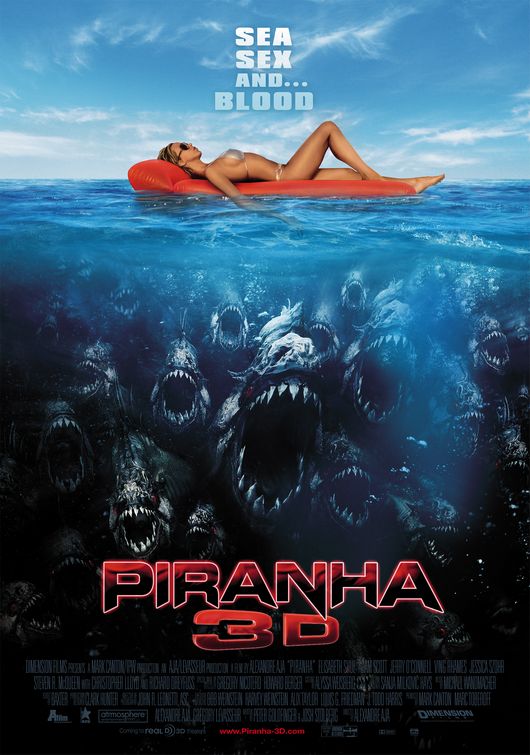 Hello I am the movie encyclopedia and if no one else will see it, I will.
Alexandre Aja's films have always been a mixed bag. His first film "Furia" was panned and completely ignored by the general public. His second film "High Tension" was raved as an equally great and equally horrible film by fans and critics alike. His third film "The Hills Have Eyes" was better received by critics, but still mostly disliked by the general public. Then P2 came out which I enjoyed, but most people didn't. And Mirrors was panned by everybody. So needless to say he hasn't had the best track record with critics and the general public.

Then he announced Piranha 3-D. A film that broke records by having the most blood in a single film as well as some of the most gore in film history, all before the film came out. A film that was a remake of a remake of a rip-off and in 3-D no less (to add to the intrigue it was also not SHOT IN 3-D ALTHOUGH THEY HAD PLANNED FOR 3-D THE ENTIRE TIME). On top of that they got an extremely eclectic cast including Ladies of the 80s Tournament winner Elisabeth Shue, Ving Rhames, Christopher Lloyd and Richard Dreyfus. A film that knew it was over the top and enjoyed every minute of it. A film that they couldn't even show clips of at the San Diego Comic-Con. 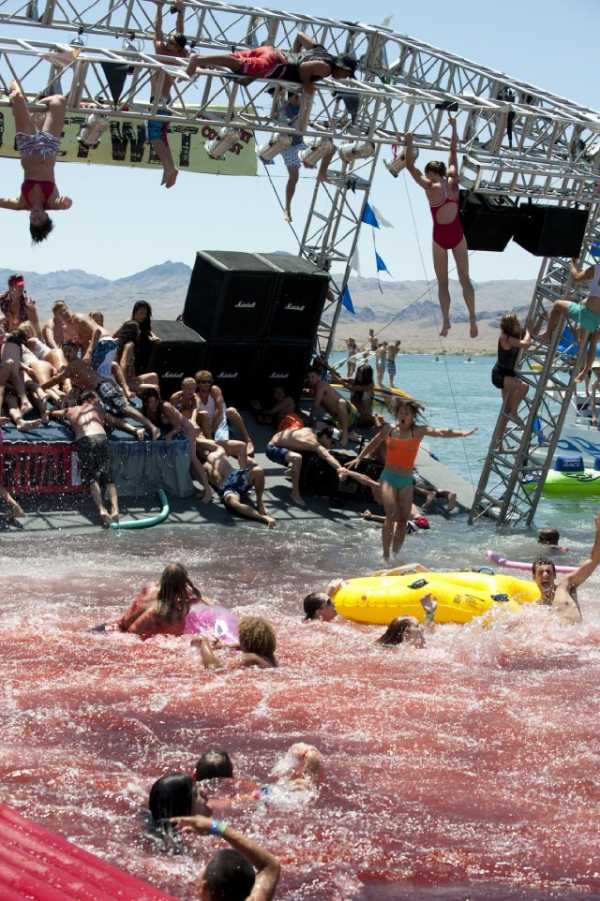 I was both intrigued and confused by the movie. The fact this WASN'T an Asylum or Sci-Fi channel original film and was an actual serious film baffled me, but the cast and the controversy made me want to give it a look. Then I read the screenplay. The screenplay was fast paced, tongue-in-cheek, over the top, gory and funny. Ever since then I have been on the edge of my seat waiting to see it.
It would be like the NEW Snakes on A Plane. A movie so over the top and tongue in cheek it would be as hilarious as it was awesome. The difference between Snakes on A Plane and Piranha 3-D? While Snakes is so bad it's hilarious, Piranha is just plain awesome and one of the best movies of the year. Is it a contender for an Oscar? Oh Hell no. But if you walk into a film called Piranha 3-D, you've already lowered your standards slightly. But in terms of sheer fun, hilarity, acting, writing, gore/violence, and lady parts this is head and shoulders above a lot of other films this year. 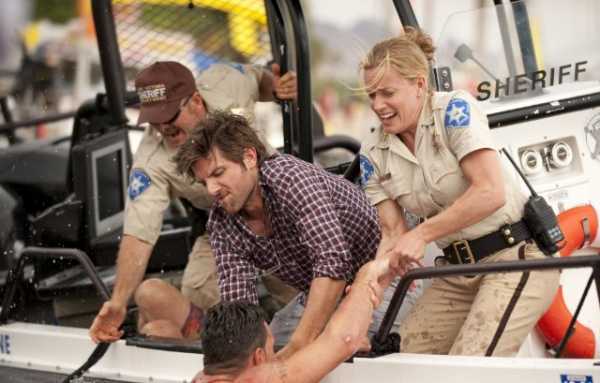 The plot follows the Forrester family: Jake (Steve R. McQueen) and Julie (Elisabeth Shue) as they each deal with Spring Break in their small town of Lake Victoria, a town that's notorious for Spring Break parties. Jake is a little shy and awkward around women, especially a girl he likes named Kelly (Jessica Szohr), but gets the opportunity of a lifetime, in terms of money and overcoming that awkwardness, when he meets Danni and Derrick (Kelly Brook and Jerry O'Connell) who work for a website called Wild Wild Girls, a parody of Girls Gone Wild. For a good amount of money, Jake is paid to take Derrick, Danni and crew around the lake to find the best spots to shoot their erotic films. Kelly tags along, making things a little weird for Jake, but the promise of boobies and money keep him from backing out.
Julie, on the other hand, is the town sheriff and whilst dealing with all the party goers and sight-seers, she's also dealing with the murder of a local man, who has seemingly been eaten and torn apart. And the same day the local man was killed also happened to be the same day a rift opened up at the bottom of the lake. When a diving team led by Novak (Adam Scott) is sent to investigate the rift, they discover that inside that rift are bloodthirsty Piranha's who will eat and kill anything in sight. 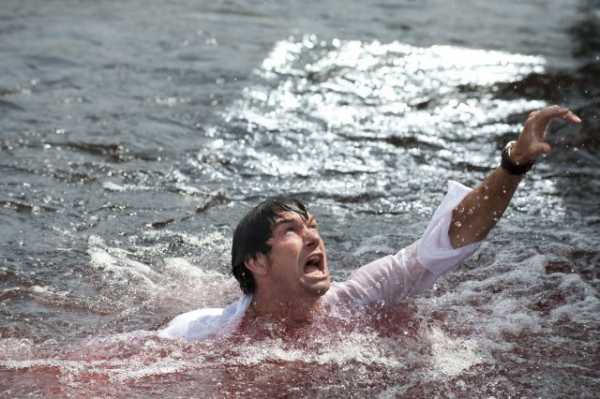 It's actually a much better plot than I expected out of a B-Movie. It moves at a phenomenal pace, the characters actually have brains and use them when they are supposed to, the cheesy dialogue is kept to a minimum and mostly reserved for Christopher Lloyd, there are some good twists throughout the film and while it ends on a bit of a cliffhanger/potential for a sequel, it's done in a way where there doesn't need to be one and you aren't cheated out of an awesome film.
Shue is fantastic in this. I've always loved her but she really shines as the heroine in this one. McQueen is a good young actor as well. There are a few eye rolling moments with his acting but for the most part he's solid. The big surprise for me though was O'Connell, who channeled his inner creeper quite well. He was over the top when he needed to be, subtlely creepy when he needed to be and just downright evil when he had to be. Plus he has one of the most awesome dying lines I've ever heard. 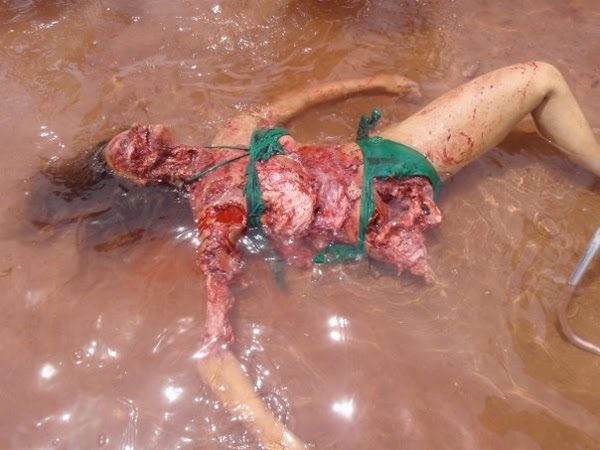 The effects are brilliant. It wasn't shot in 3-D but you could have fooled me. The screen isn't darkened, it never feels like a pop-up book and the effects are used appropriately and are never taken advantage of to the point of irritation. In fact some of the 3-D effects were used for humor or for awesome purposes. One joke is that a character gets his penis bitten off and you see it floating around in the water before the piranha's come and eat it. And for awesome purposes? There is a scene, fully 3-D, where two completely naked women swim around, make out and all while "Flower Duet from Lakme" is playing.

Think about that. It's both hilarious and awesome at the same time.
It's over the top, B-Movie fun, but is really well done and one of the best films I've seen this year. You get what you come from and so very much more. Definitely worth your time and money to see in 3-D.
And to show you I'm not crazy:

It has an 81% approval rating on Rotten Tomatoes, making it one of the highest rated, non indie films of the year. Oh yeah.
MY VERDICT: TOP FILM.
Posted by xTJMac510x at 10:19 PM