There are five girls missing, and you put the one person who knows where they are to sleep? 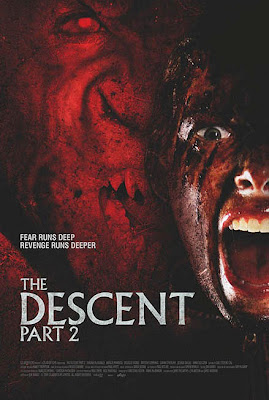 Hello I am the movie encyclopedia and if no one else will see it, I will.
As most people who are long time readers and friends of mine know, The Descent is, in my opinion, one of the best horror films ever made and of the scariest films ever made. On top of being bloody, gory and dark, this film had a big heart with its characters as well as it's great manipulation of the blackness to create tension and suspense. And the big twist ending is such a "Ah yeah...that's good" kind of ending.
So when I heard that they had made a sequel which would be released straight-to-DVD in the US, I was both angry and confused. There didn't NEED to be a sequel. There was no reason why we needed to re-do a film like this. Even Neil Marshall, the director of the original, opted out of directing the film, instead only executive producing. Instead the EDITOR from the first movie is directing it. That's never a good sign when the original director steps down.
The more I read about the film, the more it both simultaneously pissed me off and intrigued me. It didn't get the glowing praise that the first one got, but it also wasn't being panned by critics either. It was going under the "more of the same" category with an average of three stars. So eventually I headed over to the video store and picked this one up and gave it a watch. And while not as good as the original...it's not half bad. Picking up two days after the original, Sarah (the only survivor from the original) is found and hospitalized after going through the Hell that was the first film. Shortly after arriving at the hospital, the sheriff of the town starts investigating what happened. When he finds that the blood that was stained on her shirt belonged to Juno (the kinda maybe other survivor), he gets his deputy to drag her out of bed and take her to the caves to look for the rest of the team. They find a new entrance and with the help of three specialists, the sheriff, the deputy, Sarah and the three specialists are going back into the caves.
It's not a bad plot overall. You can see the twists coming a mile away and it kinda leans heavy on the jump scares but it does it's job well. I was surprised at how much more of the cave dwellers you saw and how much they changed since the first movie (they look like goblins now), as well as how much violence and gore there was. I was disappointed that besides Sarah and the deputy you really don't learn or care that much about the characters, but for a horror film I don't expect TOO much development. For what it was, the writing was solid enough and the film didn't overstay it's welcome. 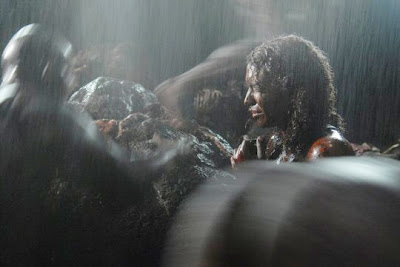 The one big gripe I always have about sequels, especially direct-to-DVD ones, is that they take the really solid cast of the first one and squander it, only giving the original characters brief cameos of a movie that was much better. Well the good news, and one of the best things about Part 2, is that they got all of the original actresses back. Despite all but two being dead, it IS nice seeing everybody again. And it's especially good since they are great actresses. Juno feels like an evil Lara Croft and Sarah, while suffering from amnesia in the beginning, gives it her all as the brave heroine yet again. The new actors are kind of meh horror fodder but do the job well enough. That and most of them are there just to be killed so hey, whether they are great or not doesn't matter if they get ripped in half ten minutes in.
One of the things I loved about the original was the cinematography and the masterful score. Well the great thing is that this still has that great feeling of claustrophobia and the fear of the unknown like the original, and the ambient noises and the silence accentuated suddenly by a blasting score is something to behold. While I'd seen it all done before, it's one of those "If it ain't broke don't fix it" kind of things.
Despite all this praise I DO have some gripes. It overstays it's welcome slightly and it's easy to spot places where it could have been trimmed down. The supporting cast, like I said, really does lack compared to the original actresses, and the revealing of the cave dwellers earlier on and more so than the original is a bit of a let down considering how creepy and mysterious they were before. Now they're pissed off orc goblins who have heightened hearing. My only other gripe is that you can TELL Marshall wasn't involved. Considering how much he made the first one his own, you can tell that he pretty much just slapped his name on it and said "There." At least with Smokin Aces 2 you could tell Carnahan had SOME part in it. 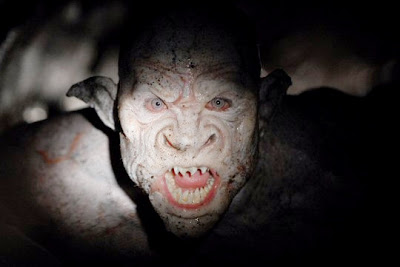 Gripes aside, The Descent Part 2, while not as good as the original, is a solid follow up and worth a look even to those who were skeptic like myself.
MY VERDICT: SEE IT
Posted by xTJMac510x at 2:04 AM