I'm a peacock man! You gotta let me fly!! 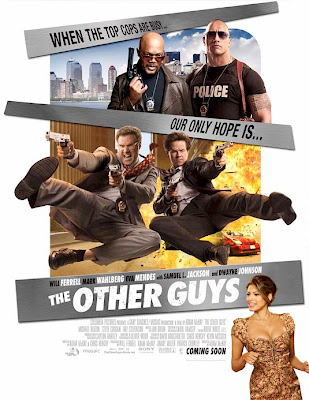 Hello I am the movie encyclopedia and if no one else will see it, I will.
Adam McKay has established himself in the world of comedy thanks to his involvement and friendship with Will Farrel. Since 2004, Adam has released a good number of Will Farrel's top selling comedies including Anchorman, Talladega Nights and Step Brothers, as well as some of his bigger flops like Land of the Lost. Whether good or detrimental to his career, Adam knows Will Farrel and how to make him as funny as possible in ANY movie. On top of knowing Will, he also knows that he can't re-use ideas and settings of his previous films so instead of opting out for a standard comedy, McKay has opted to do: a buddy cop film.
Before you start screaming "AH flashbacks of Cop Out" don't worry this film is FAR better than Cop Out. Unlike Cop Out, the chemistry between the two leads is actually there and never feels forced. While Mark Wahlberg and Will Farrel's characters may rarely get along in the movie, they ARE a cohesive unit and they work well off of each other. This works story-wise and comedy-wise. You WANT to see them together and when you do it's funny. It's an organic pairing I haven't seen since Danny Glover and Mel Gibson. 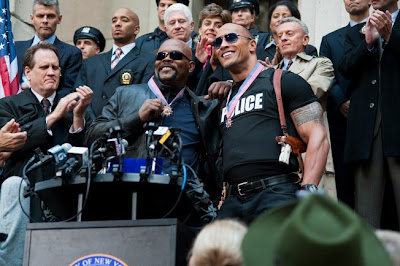 The story of The Other Guys follows two detectives, Allen Gamble and Terry Hoitz, who are basically the third wheel of the police force. There are the hotshot detectives (Samuel L Jackson and The Rock), the competent but not bad ass as said hotshot detectives (Rob Riggle and Damon Wayans Jr) and then the other guys. Allen is a former forensics accountant and pimp who really doesn't like confrontation and would rather sit and do paperwork for everybody rather than go out in the field. Terry on the other hand WAS a hotshot detective and about to be promoted to the head of homicide when, during the final game of the World Series, accidentally shoots Derrick Jeter in the leg, causing the Yankees to lose the World Series. That pretty much ruined his life and got him demoted to third wheel. But a robbery gone wrong ends up killing the hotshot detectives (Aim for the Bushes) and now it's up to Terry, with very little help from Allen, to prove themselves as detectives and that they can be heroes to.
The writing is actually quite good but does have some hitches. First is that the film runs out of steam about halfway through the movie. The first half is near peeing funny with so many great back and forths between Allen and Terry as well as just the situational humor that happens with them (the music they listen to, accidentally going too fast on a road, police car Prius). But towards the second half they start trying to develop Allen and Terry more as characters so that we care about them more and for the most part it ends up being more awkward then actually funny. That's not to say they AREN'T funny, but they really slow the pace of film down to a crawl. On top of that, there is more action then comedy in the second half so there is less time for subtle humor than there is the first half. Also the whole Allen as a recovering pimp thing is only funny once and that's near the end of the movie. Otherwise it's just kind of an odd "Well we need to get out of this scene so let's have Allen gangster out and end this scene on an awkward note" kind of feeling. 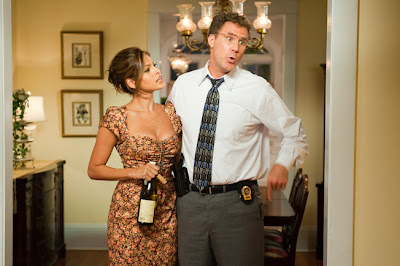 Besides the top heavy writing though the film is actually really good. You have to LOVE the main actors though. If you are tired of Will Farrel being Will Farrel than you aren't seeing anything new. He's loud, slow, abrasive, blunt, deadpan, over-the-top, silly and like a clown without makeup who had been hit over the head. If you don't like that Will Farrel than you will hate this movie. You also have to love Mark Wahlberg because you get a lot of his same stuff as well. He's mean, yells a lot, is violent but has a soft side underneath it all...classic Wahlberg. The difference though is you are laughing ON PURPOSE when he's being this over the top angry character.
The supporting cast is good as well. Despite only being in the movie for seven minutes, Samuel L. Jackson and The Rock (I will always call him that) are phenomenally funny. They are every action cliche in two bodies. My only problem is they should have been in the movie more. They were some of the funniest scenes but only Samuel L Jackson ever returns after those seven minutes and that is to work as the narrator of the film (which is kind of out of place). Michael Keaton, Rob Riggle and Damon Wayans Jr are also all really funny as the rest of the squad. Keaton is a good chief, but is less angry than you'd think a police chief would be. Riggle and Wayans are their over the top selves and it works well for them. Eva Mendes is good for the brief scenes she's in, but she's mostly used for eye candy.
The main villains are good as well. Ray Stevenson (aka The Punisher from Punisher:War Zone) is great as the villain, working to make sure the other villain David Ershon (Steve Coogan), a greedy businessman who owes a lot of people way too much money, stays on track and never leaves his sight. Coogan is typical Coogan, take it or leave it, but Stevenson works well because he's menacing and his voice is very intimidating. You'd believe he is a "babysitter" if that's who he was in real life. 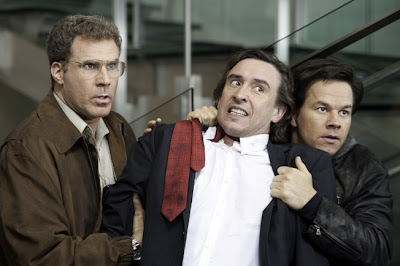 This film is good. It could have been great if not for the top heavy writing, awkward character scenes, and more Sam Jackson and the Rock, but for what it is The Other Guys is one of the better comedies of the summer and the definitive buddy cop film of 2010. That's not saying much given it's competition but if you've loved Adam McKay/Will Farrel's stuff in the past then you will love this. I liked it.
MY VERDICT: SEE IT
Posted by xTJMac510x at 11:00 AM