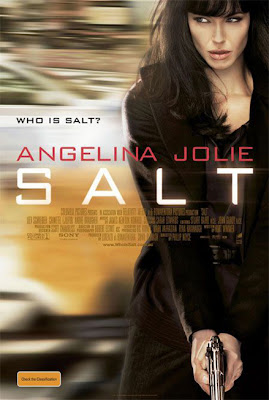 Hello I am the movie encyclopedia and if no one else will see it, I will.
As someone from a smaller town I usually hate crowds in theaters. That's why I make an effort to go to the cheaper, ghetto theaters near my house instead of the nearest Regal theater. Sure the Regal theaters are nice but the crowds are just too much. If I'm shoulder to shoulder with someone, the movie becomes less fun. So what if a speaker is shot, the dialogue is at a whisper, and there is an occasional fight in the theater? I'd rather sit through that then crowds. What does this have to do with Salt?
Well one of my mother's best friends is a cop. He works for the local PD and so whenever there is a sneak peek of a film up in Seattle at this one giant three story wooden multiplex (which worried me in case of an electrical spark) he would get notice right away in case they needed someone to cover it. So on day 1 they became available Bob (his name) grabbed 8 passes. The passes themselves were free but they came with a catch: you must come early or your pass doesn't count. They only have 450 seats in the theater and they hand out over 600 passes. But Bob grabbed the passes and invited his fiancée, her niece and fiancée, her brother and his partner and my mother and I. We waited in the middle of the bulk for about an hour (I brought The Girl Who Kicked the Hornet's Nest to read) and then were seated. After some balloney about free T-Shirts the movie started without any previews. 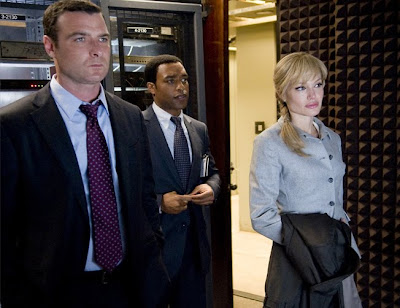 The film follows a CIA intelligence agent named Evelyn Salt (Angelina Jolie). She is a decorated agent, skilled in brains and brawn and is one of the most respected agents in her division. On her anniversary with her husband she encounters one last walk-in before leaving for the day. The man is named Orlov and he tells a story about a man and a woman whose child is taken away, forced to become a super agent for Russia, taught in the ways of American culture and taken to America to live as a sleeper agent until she is needed by her country. Lee Harvey Oswald was apparently one and there are hundreds out there. But that's not the only reason that he's there. Apparently there is going to be an assassination attempt on the Russian president at the funeral of the Vice-President. The agent responsible's name? Evelyn Salt.
When Evelyn get's the news she flees. She says, and we are shown, the reason she's running is to find her husband who was kidnapped. But at the same time she is also apparently going to try and assassinate the Russian President. So who really is Salt? A good woman and a good agent trying to clear her name or a Russian mole on a mission of destruction? 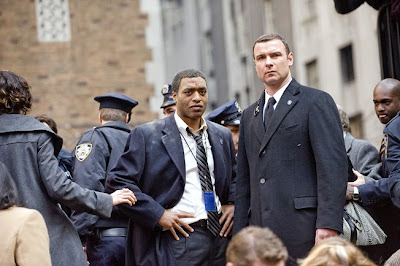 Salt's biggest glaring error is it's story and writing. For one there are a lot of plot holes and inconsistencies. These only become more apparent when the second problem, twists, comes into play. This film has a LOT of twists. It never has any deep twists like in the Sixth Sense but it has a lot of the writer trying to make you go "Bet you didn't see that coming." The problem is that you DO see it coming and when you don't see it coming it only makes you think about the massive plot holes that opened up because of them. So it becomes a slippery slope there. On top of that there is a lot of exposition heavy sequences early on and the film has a knack for flashbacks. Whenever Jolie stares directly into the camera they seem to pop up. It becomes annoying after the second time because you realize the director is trying to force an opinion or an emotion onto you. On top of all of that the dialogue is mostly predictable action movie fodder and the character motives for a number of them are really hard to follow.
The acting also suffers in a lot of places. Angelina Jolie is awesome as always (I have no problems with her at all and that's not just my hormones talking) but the rest of the acting is meh. Liev Schrieber continues to be a monotone asshole in every single role he does but he does show slight range (shocker) when his voice cracks during a line (which caused me to laugh). Chiwetel Ejiofor is okay but seems to have this constipated look plastered on his face the whole time. That and he suffers from the monotones as well but that could just be from hanging with Schrieber the whole time. August Diehl who plays her husband is weird and has a thick German accent that makes everything he say unintelligible. The only other good performance besides Jolie would be Daniel Olbrychski as Orlov but he is only in the film briefly on and off.
On a plus note the action is pretty awesome and you can tell that Jolie does her own stunts. That and the film has one really awesome kill move that will definitely be in my top 10 scenes of the year. It's creative, unique, brutal and it's badass to watch. It still doesn't make up for the crap writing or acting but it's pretty awesome. 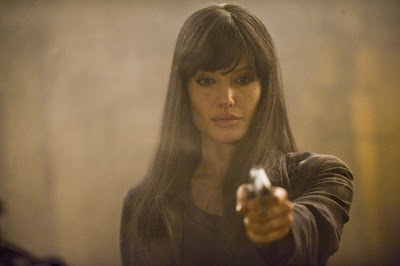 Despite all my negative ranting about the film it wasn't terrible. Jolie is a good actress, the action is nonstop and intense and it's not overly long. The film suffers from bad writing and sub-par acting but if you want action with a hot chick, you get action with a hot chick. At least worth a rental.
MY VERDICT: RENT IT
(PS: If you want the nitty gritty it's like a better version of Tomb Raider...if that helps)
Posted by xTJMac510x at 12:35 AM