You can't stop crime! That's what you never understood. I'm controlling it! 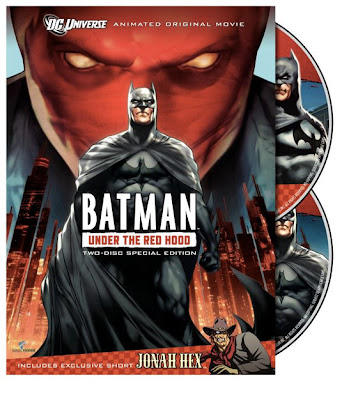 Hello I am the movie encyclopedia and if no one else will see it, I will.
As a child of the 1990s I grew up with Batman: The Animated Series. Whether it was Mark Hamill's Joker, Kevin Conroy's Batman, the storylines or the animation I loved the show to death. On top of that I always sided more with Batman than any other superhero (If you look in my action figure containers I have at least a 5:1 ratio for Batman toys). Why? Batman was a real person. He was a man surrounded by death who fought for good using his brain and his gadgets, not superpowers. To me that was always better. And Batman has only gotten better over the years.
While the films that came out were disappointing, the direct-to-video films were always fantastic. It seemed that Warner Bros/DC knew what they were doing and weren't deviating from that plan. It all escalated up till Batman Beyond: Return of the Joker, which is considered by many to be the best and darkest film. After that Batman kind of became more kid friendly/teen friendly and the movies lacked. That was until Nolan came and released his two Batman films. Since then the films have been great and now a new one "Under the Red Hood" is out and I must say it is AWESOME. 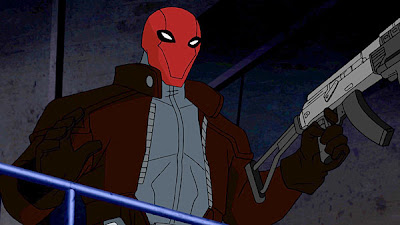 Now I don't read a enormous amount of comics but I'm pretty faithful to a few series, one of which has been the Batman comics. And the two story arcs this film is based on are two of my favorite story arcs in Batman comic history: "A Death in the Family" and "Under the Hood." The first arc followed Jason Todd, the second Robin, and how he gets brutally beaten and blown up by the Joker, who is working to try and use nuclear weapons with terrorists. Batman is devastated by this and goes on a violent filled rage, becoming a darker knight than he already was. The second arc picks up years later when a new vigilante hero appears known as the Red Hood. The Red Hood was The Joker's previous identity before becoming the Joker but he's in Arkham and this new guy seems like a hero, but a ruthless killer as well (A Dexter-esque kind of guy). This arc has Batman playing cat and mouse with the Red Hood with him trying to figure out who he really is.
The film follows this basic outline, although it condenses the first arc into just the opening scene of the film. That figures since Judd Winick, the guy who wrote "Under the Hood" wrote the film as well. He expands the Red Hood arc into a very fast paced, dark, violent and entertaining film. The character of the Red Hood is well developed and the twist, while slightly predictable, is dramatic and action filled enough that you don't mind the predictability. You can also see many nods to classic Batman comics, villains and series in the film as well. It's a Batman film made for Batman fans. And if you're only a casual fan than hopefully this film will make you want to read the comics. 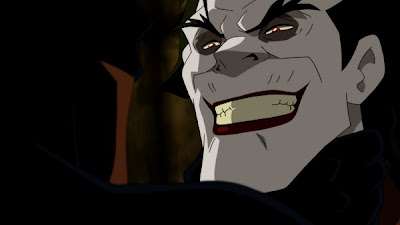 The animation is stellar. The angles are sharp, each character looks distinct, it doesn't look too cartoony but not too realistic either, balancing on a fine line, and the city looks beautiful as well. Joker looks slightly more meaty and not lanky, which I think works considering Hamill isn't Joker this time. The 3D chase scenes (not glasses 3D but digitally rendered) are beautiful and well choreographed as well. Overall very stellar, high quality animation. You can see a lot of work was put into it.
The voice work is an interesting one. It doesn't feature Kevin Conroy or Mark Hamill (a first for me movie wise) in their respective roles instead having Bruce Greenwood as Batman and John DiMaggio as Joker. On top of that you have Jensen Ackles as Red Hood, Neil Patrick Harris as Nightwing, Jason Issacs as Ra's Al Ghoul, and other actors like Wade Williams, Gary Cole and Bruce Timm (guy who created animated series) as the Riddler. This sounds odd on paper but the casting and the voice work is superb. Greenwood gives kind of a smokier Batman than we've seen before but much better than Bale's snarl. DiMaggio is surprisingly well and his voice sounds more menacing sometimes than Hamill. Everyone else is brilliant and NPH always blows me away. Great work all around. 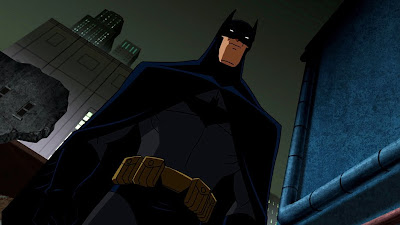 On top that you got an amazing score by Christopher Drake, a Jonah Hex short that's better than the movie and plenty of awesome extras.
Is it on par with the Nolan series or the first two Batman films? No. But it's a great quality Batman film that any fan should have.
MY VERDICT: OWN IT
Posted by xTJMac510x at 8:00 PM