You will not cry, or sneeze or barf or fart! No annoying sounds. 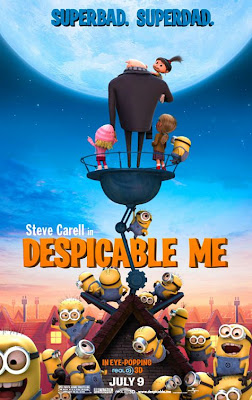 Universal Studios and animation newcomers Illumination Entertainment have teamed up to create what they think will be the family hit film of the year. While Toy Story 3 has been a big hit both commercially and critically, Universal thinks, or must think, they got the edge with Despicable Me due to Universal's domination of the airwaves and the fact that it's a new series and not already an established series. Ever since Harry Potter and the Half Blood Prince, Despicable Me has been everywhere. Posters, toys, video games, appearances on television shows, banners on tour buses, costumed characters at Universal Studios take your pick. Despicable Me has been in the hearts and minds of people for a long time and yet now the film is out. So does it stand out in the sea of animated films? Was the nonstop exposure for good reason? Well I can certainly tell you it was. Despicable Me is a refreshing, cute and entertaining animated film and a must see for kids and adults alike. 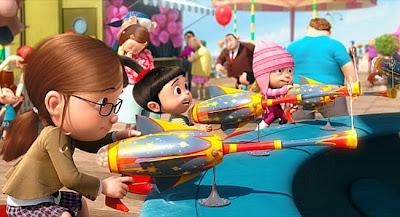 The plot of Despicable Me follows the exploits of Gru (Steve Carrel). Gru is a supervillian but apparently not a very good one. Every now and again his exploits work, but most of the time things seem to backfire on him. But his crack staff of an old, almost deaf scientist (Russel Brand) and army of minions keep building the weapons and gadgets, even if they don't work or are extremely impractical.

One day Gru gets the idea that he must steal the moon, which he considers to be the most evil thing anyone has ever done. He's also got a personal vendetta with the moon, since when he was young he had dreams of being an astronaut, but that never panned out. But the bank won't fund him, his fame is being overshadowed by a new villain Vector (Jason Segal) and he's now got three orphaned children to take care of (Granted it was his fault for not realizing three young children are a handfull). Needless to say things aren't easy for our hero(?) but he's doing all he can to meet deadline and become better than Vector. 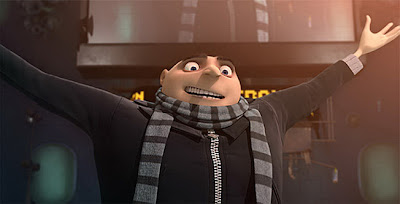 The animation is really well done in this film. It's bright, colorful, the 3-D adds some nice depth and effects and it has the feeling of a Pixar film gone Looney Toons. Basically this was a fun film on the eyes. The writing is extremely solid although I feel a few filler scenes could have been cut out. What really helps the writing though is the fabulous acting, especially from Steve Carrell and Russel Brand. Carell is a great Ricardo Montoban/Bella Lugosi/James Bond Villain mix and he is very funny, intimidating, and heartwarming. Russel Brand is very subdued and proper, something I've never seen, and he provides a lot of great lines too. Jason Seagal and the rest of the cast are great, with most of the cast being established comedians.

If you want great family fun, comedy that both kids and adults will love and a heartwarming moral than give this a shot. It's better than you think it'll be...trust me on that one.

Email ThisBlogThis!Share to TwitterShare to FacebookShare to Pinterest
Labels: kids, Own it