We needed to be here. Our kids were turning into little brats. 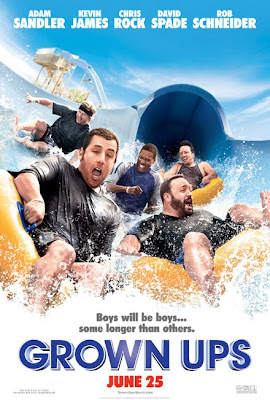 Hello I am the movie encyclopedia and if no one else will see it, I will.
Comedians who are past their prime are hard to watch. There are those who are on the verge like Jim Carey and Robin Williams, but both still have some juice left in them. On the other side of the coin you got Mike Meyers and Eddie Murphy who are so past their prime that they are just withered plants stinking up the joint. I'm not the only one who thinks that though. Ask anybody and they will tell you that both of them are waay past their prime.
But then there is this group of comedians. They are an odd assortment of comedians, with three distinct groups seperating each of them: the stand up comedians turned A-List actors (Chris Rock and Adam Sandler), the comedian turned TV superstar but hasn't made a good thing since the show ended (Kevin James) and the unfunny comedians who you want to go away but won't (David Spade and Rob Schneider). So it's funny when you put all of these guys together in a movie because you get that odd mix of comedy that's both fun AND painful to watch. 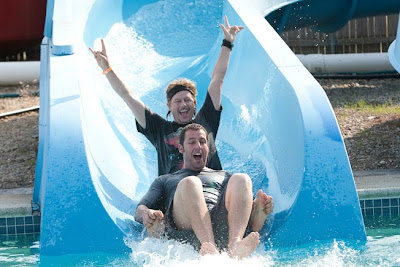 Grown Ups was probably written on a used cocktail napkin one night when Adam Sandler and Chris Rock were having drinks. "What if we get five best friends together and have them meet each others families?" That's the basic idea of this film. Lenny, Eric, Kurt, Marcus and Rob are five best friends. When their basketball coach and mentor passes away, they all go to a lake house to mourn, spread the ashes, and spend some quality time together. All five of them are goofballs and all five have very different personalities and family types.
That's really it. I'm pretty sure the majority of the film was improvised and the plot basically worked as a vessel for these comedians to tell their jokes or their little quips at each others expense. There's not much development, character or plot-wise, but a good number of the jokes work and got a laugh out of me. Then again though, when you have two really funny actors and one kinda funny actor telling constant jokes, I guess you really don't need a WHOLE LOTTA PLOT. 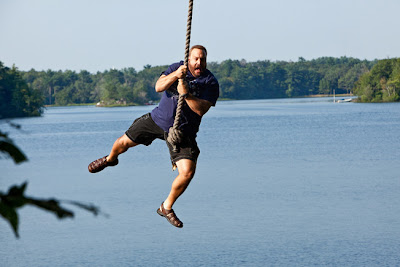 The acting is what you'd expect with these actors. Sandler is entertaining, funny and sweet when he needs to be. Chris Rock is hilarious playing outside of his comfort zone as an effeminate stay at home dad (not gay though). Kevin James is hit and miss but funny in his more physical humor (like the pictured rope swing scene). Schneider is gruesome to watch and Spade is snarky, boring and unfunny. The rest of the cast is just as varied but overall works for the most part.
I wouldn't NOT recommend this film. It's decently funny, has heart, and some good performances. If you don't mind giving up plot and dealing with two unfunny actors, then you will probably get a kick out of this movie. A good rental comedy.
MY VERDICT: RENT IT
Posted by xTJMac510x at 6:35 PM