We're busting out of here...tonight. 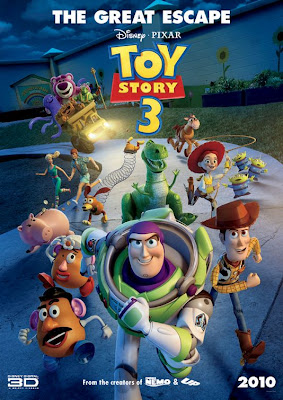 Hello I am the movie encyclopedia and if no one else will see it, I will.
As a child of the 90s I grew up with the Toy Story series. They weren't the deepest films like future Pixar films would end up being like but they were full of great action, adventure and plenty of imagination. It was a unique and original series and set up Pixar to be a great company.
Well it's been a while since we've seen the adventures of Woody and Buzz on the big screen. Buzz has had some popularity with a small screen tv series and cameo appearances in other Pixar films but Woody has been fairly absent. Woody appeared in countless Disney based video games and a Disneyland ride but has otherwise been pretty quiet compared to Buzz. Either way it wasn't until last year's re-release of the first two films as a 3-D double feature had we seen them on the big screen together. Now that the third one is here did it live up to the promise of the previous two? Is it as good or better than other Pixar movies? Well I can tell you Toy Story 3 DOES live up to the promise of the first two and IS on par with other Pixar films, if not on the deepest level. 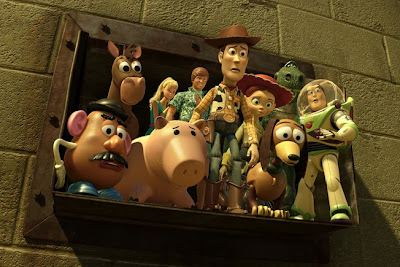 Andy is going to college. That's right, the little boy is now an adult and is ready to move out. Most of the original toys have been sold or donated but there are a few toys left that Andy couldn't bring himself to get rid of. But the toys, despite being the chosen few, still feel left out and unused, like Andy doesn't care. They come to terms with going into "attic mode" but when Andy mistakingly puts all the toys except Woody in a garbage bag, the toys freak out and decide that they would rather be donated. Because of plot conveniences, all the toys, including Woody, all end up at Sunnyside Daycare Center.
Sunnyside seems like a great place where toys are never forgotten and treated greatly. It seems to be run by kind and caring people who put other toys needs before themselves. Well it all turns out to be a fallacy and a majority of the film ends up being Prison Break: Toy Edition.
It's written by the same guy who made Little Miss Sunshine and it tells. The film has that child-like wonder and imagination that the previous films had, but it's also much more mature in terms of themes and even when it comes to some of the stuff that happens in the film. I can definitely say there were a few times where I was wondering if this was really G rated. It's really well written, really well crafted and the ending is truly brilliant. If they make a Toy Story 4 I think I will truly be devastated. The ending was that strong and added a level of closure you don't see in a lot of series ends. 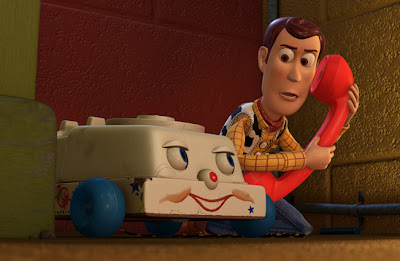 The acting is top notch as per usual with Pixar films. Tom Hanks is great as Woody and Tim Allen is amazing as Buzz. Hanks adds true emotional depth with Woody and it shows that Hanks really cares about his character. Tim Allen had a tough time since he goes through a lot of mood changes in the film but he is great as always, funny when he needs to be, serious when he needs to be, good job overall. All the other actors are great too and I can't pick one performance that lacked. Quality Pixar voice work.
The effects and animation are beautiful as always and the 3-D isn't revolutionary but it does add nice depth and doesn't detract from the film. A rare thing in most modern 3-D films.
Is it a great film? Yes. Is it the best of the year? Not sure yet. But it is definitely the best family film you will see all year.
MY VERDICT: TOP FILM 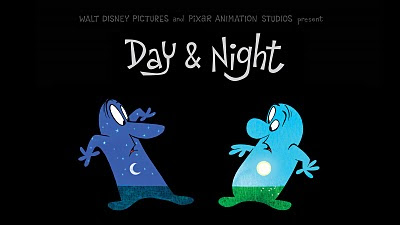 Also the short at the beginning was one of the best shorts ever...just saying
Posted by xTJMac510x at 2:52 PM