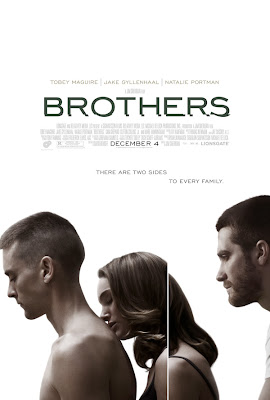 Think back to your movie experiences. You sit down before a movie and watch the previews. In some cases the previews are better than the actual movie. Its a filmmakers chance to woo you into paying ten bucks to see their film. They take the best parts of their film and put it all together into a 3-5 minute little mini movie.

I am one of those people who loves previews. In fact most of the time that IS what sells a film for me. I am one of those people who never pays attention to what critics say (unless its PANNED) and just goes by what the trailer says. Well when I first saw the preview for Brothers, a remake of Brodre, a 2004 Dutch film, I was pretty excited. While I cant stand any of the main actors, the plot really seemed to sell it for me.

Sam (Tobey Maguire) is a marine who is sent oversees. He has a wife Grace and two daughters Isabelle and Maggie. On the same day he is deployed Sam's younger brother Tommy (Jake Gyllenhaal) is released from jail. To redeem himself in Grace's eyes and since Sam is overseas, Tommy decides to help out around the house. Not too long after (THIS IS NOT A SPOILER ITS IN THE PREVIEW!) Sam's helicopter crashes and he is presumed dead when he really is just captured. Grace is torn up but finds comfort in Tommy. Sam does unspeakable things to get released and when he returns home he is a shell of his former self and suffering from PTSD pretty badly. Needless to say things go badly.

Its a brilliantly done movie. While the Grace/Tommy scenes drag on and seem a little eye roll worthy, all of the scenes with Sam and all the stuff Sam does is really well done and extremly intense. After Sam returns home the tension never stops.

I said earlier that I am NOT a fan of Maguire, Portman or Gyllenhaal, they do all three do a great job in the movie with Maguire doing probably the performance of his life. Some would say that he overacts but he encompasses what someone with PTSD is really like and he probably deserves an award for his performance. He's almost entirely made up for Spider Man 3 (almost).

Its a really heavy film to take in and it does get pretty intense but director Jim Sheridan (whose last film was Get Rich or Die Trying but is famous for My Left Foot) and writer David Benioff (25th Hour, Stay, Troy, X Men Orgins:Wolverine) create an extremly well made movie that fans of The Deer Hunter or films like that will really enjoy. Its definetly a dark horse for one of the best films of the year.