Carl Fredrickson, explorer. When I get big, I'm going where he's going, 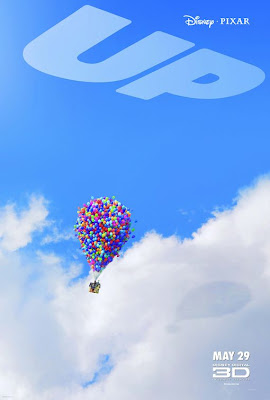 Hello I am the movie encyclopedia and if no one else will see it, I will.
Pixar has a knack for making really good films. Ever since their start they have churned out good movie after good movie. And the interesting thing is that they keep getting better. Granted Cars was not THAT good but it was tolerable and entertaining to a lot of people. But greats like Finding Nemo, The Incredibles, Monsters Inc, Wall-E and the Toy Story series have made Pixar the dominant animated studio out there and they are certainly hard to beat. Their latest movie Up however really showed me just how good animation can be not only in storytelling but in creating a vivid image that truly makes you feel like a child again, wide eyed and happy. That and it has probably the BEST opening scene ever. If anything else, that opening scene should show you how Pixar doesn't even have to use words to make you laugh and cry all within a five minute period.
The story of Up is that of Carl Fredrickson. Carl is a grumpy 80 year old who lives in a small house surrounded by big cities. He and his wife Ellie had dreamed of adventure but after she *small spoiler* passes away he decides to curl up in his house and do nothing. When Russell, a small Boy scoutish kid working for the Wilderness Explorers visits he gets blown off by Carl. Carl then, before he can be taken to the retirement home, fills his home with balloons and turns his house into a makeshift aircraft, with Russell hanging on for dear life. Together they must venture forth to South America where Carl has wanted to go his whole life.
It's a wonderfully written story that really builds on that buddy story idea. Its not your usual fare, an 80 year old and a small child, but they have great chemistry and work well together. All the acting is top notch with Ed Asner doing a phenomenal job with Carl. The characters are memorable, the set pieces are vivid and everything about this movie is a joy to watch.
Pixar has yet to disappoint (truly that is) and Up is the latest in a long line of great memorable films. Up will be in the hearts and minds of children and adults for years to come.
MY VERDICT: TOP FILM
Posted by xTJMac510x at 10:19 PM