You're a world class liar, darling. Go out there and lie for Italy. Lie for Italia. 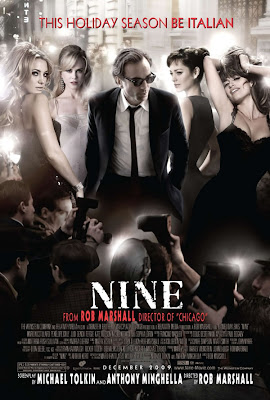 Hello I am the movie encyclopedia and if no one else will see it, I will.
I am a true sucker for musicals. Even if the movie is dull, unoriginal or juvinile, if the music is good I will give it 5 stars on the spot. And most of the time if a movie has the description musical on it I will be there for its first showing. This is most of the time. Not for Rob Marshall. I don't know what it is about him but I can't stand any of his movies. On top of that I thought Chicago was a piece of crap. I love the musical and so I was ecstatic to see the movie. After I got out of the theater I was like "That was horrible." I see I am the minority in my thinking but I don't think Rob Marshall has got the idea of how a musical is supposed to work. And for some reason he hasn't learned that because, while wonderfully acted, Nine fails because of Marshall.
In this paragraph I would tell you the story or the plot of Nine. But honestly I can't: there is none. That is the saddest part of the whole movie too, the lack of plot. I guess if I had to throw out descriptions than it would go like this:
Fredrico Fellini's 8 1/2-the musical....
Not good enough? Fine. Guido Contini (Daniel-Day Lewis) is a movie director. He is trying to make a new movie called Italia but is struggling due to romantic complications, a midlife crisis and worst of all writers block. His wife (Marion Cotillard) is bitter towards him because he is cheating on her with Carla, his mistress of many years (apparently..never explained). Meanwhile he is dealing with reporters, one being Stephanie from Vogue (Kate Hudson), his film muse demanding a script (Nicole Kidman) and trying to figure out how to get over writers block by venting to his best friend and costume designer Lilli Le Fleur. While all this is going on he has flashbacks of his mother (Sophia Loren) and a whore from his childhood (Fergie)
I know that sounds like a decent plot but its really disconnected. While it could have just been a really well acted look at or remake of 8 1/2 they had to put musical numbers in it. Its because of these musical numbers that the film becomes disjointed and confusing. Its like they are having musical numbers for the sake of having musical numbers. They randomly break out into song for no reason other than to break out into song. And the sad part? Only two of the songs are good...and oddly enough the film knew that since the two songs it played over the credits were the two good ones.
What are they? Cinema Italiano by Kate Hudson and Be Italian by Fergie. This is hilarious since these two have almost the least amount of screen time (Sophia Loren having the least) of all the characters in yet they blow everyone else out of the water.
So is it a good movie? That's really hard to say. All the actors are amazing in this movie and provide a lot of great emotions and have great dialogue with each other. The only problem is the music. Its like if they took a really well acted and well made movie and threw music in there. And because of this the film is brought down.
Its still a good enough movie though and if you like musicals or just want to see a well acted Daniel Day Lewis movie than give this one a look.
MY VERDICT: SEE IT
Posted by xTJMac510x at 4:30 PM