Get in da choppa! 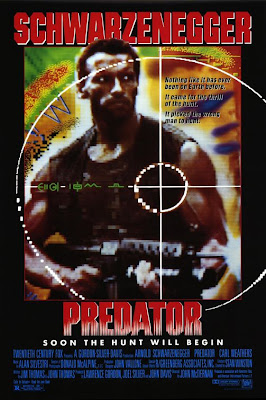 Hello I am the movie encyclopedia and if no one else will see it, I will.
Sorry to confuse anyone by not saying but by now you should know what Conan was number 4 and Predator is number 3 on my top 10 Arnold Schwarzenegger movies of all time. Probably one of his best known movies and also known for spawning a two sequels (one is in the making right now) and a spin off series (without Arnie) Predator has become an American classic. Whether we want to admit it or not we have all said "Get in da choppa" or "Stick around" and have all seen Predator numerous times. Its sci fi futuristic elements, the horror and action/adventure of it all and a one on one hunt at the end makes this an unforgettable feat of cinema.
If you don't know by now the plot of Predator is simple. A special task force of commandos led by a man known as Dutch is sent to rescue a member of the presidential cabinet who has been kidnapped by mercenaries. When they dispatch of the mercenaries camp only to learn it was a set up (they were sent just to destroy the camp) they find a woman named Anna and head to the extraction point. As they go along they realize that a creature is hunting them down and killing them off one by one.
The film goes from generic action movie featuring tough as nails soldiers to an amazing futuristic sci-fi/horror film in a matter of minutes. Its essentially a game of cat and mouse, predator and prey and its done extremely well. The acting is cheesy but great for the film with Arnold and Kevin Peter Hall (the Predator) standing out the most. I will say though that Jesse Ventura is pretty awesome in the movie as well. It has its moments of pure stupidity but all of the films flaws are made up in the final confrontation between Dutch and the Predator. Its a survival game and the final duel shows that predator is not only a devastating enemy but also a gentlemen of sorts (*spoiler* he lets Dutch get up so they can fight hand to hand and he even lets him have a minute)
This film is ballsy, full of action, suspense and sci fi greatness. It has its stupid moments but overall its an amazing film that should not be missed.
MY VERDICT: OWN IT
Posted by xTJMac510x at 12:56 AM