Spying is easy...babysitting is hard 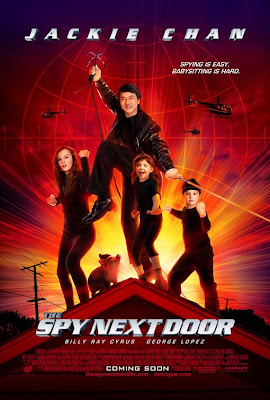 Hello I am the movie encyclopedia and if no one else will see it, I will.
I'm not going to be mean to Jackie Chan. So many other critics whether professional or amateur love to take stabs at him. They say he is past his prime/too old. They say that he is no longer relevant or cool. They say that he can't act and is butchering the English Language. Well I'm not going to do that. Jackie has been one of my idols my whole life. His older films were badass. Even if they were comedies like Rush Hour Jackie always amazed me with his ability to endure as much pain and suffering doing his own stunts for our enjoyment. Sure nowadays he mostly does kids movies and comedies like Rush Hour 3 ect but can you blame him? He is in his 50s now and must be in pain all the time now. I'm surprised that he can act at all. He's got his health to think about. So with that said I must now review his latest film Spy Next Door.
The Spy Next Door is the new film by Brian Levant (Jingle all the Way) and is the story of Bob Ho (guess how many Bob Hope jokes there are?) a CIA agent who poses as a pen importer. He falls in love with Gillian and despite her three kids not liking Bob they get together. When Gillian's dad gets injured Bob has to take care of the kids, all while stopping an evil man trying to take over the world with oil.
It's True Lies with Jackie Chan and a bad script. Jackie does fine with what he is given (the problem with this movie) but all the other actors are abysmal. Billy Ray Cyrus is dull as ever, George Lopez lacks any real bite in this movie, the villain is boring, Lucas Till can not play a Russian spy and the kids are stereotypes of stereotypes. Basically everybody sucks. And the writing sucks, and the directing is bad. Basically its just a bad movie all around.
Bless his heart but Jackie can't save this picture. If you got young kids you will probably end up seeing it but unless you are 5 or have a kid who is 5 or younger than please stay away from this one.
MY VERDICT: ABOMINATION TO CINEMA
Posted by xTJMac510x at 2:23 PM

Email ThisBlogThis!Share to TwitterShare to FacebookShare to Pinterest
Labels: Abomination to cinema, kids