First I'm gonna use you as a human shield, then I gonna kill this guard over there, then I was thinking about breaking your neck 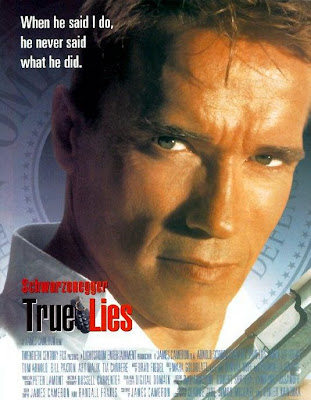 Hello I am the movie encyclopedia and if no one else will see it, I will.
Now we get into the top 5 favorite Arnold movies. This was probably the hardest for me to come up with because my top 5 favorite Arnold movies switch up all the time. But then I had to think about which films showcase Arnold as the true badass that he is. And while True Lies is one of my favorite movies of all time and also my favorite James Cameron movie of all time (I can feel the hate mail already) I think there are four others that show off Arnold's badassery more than True Lies. But for the record, True Lies is an amazing movie that I have seen probably 20 times.
The story of True Lies is that of Harry Tasker. Harry works for the Omega Sector, a group of covert counter terrorist operatives. He is the best of the best, the toughest of the toughest and and brilliant as well. The only problem is that he leads a double life. His wife Helen (Jamie Lee Curtis) and daughter Dana (Eliza Dushku *pant*) think he is a mild mannered computer salesmen/tech who goes on lots of trips. Because he is always away Helen and Dana feel unappreciated. When rumors of infidelity go around involving Harry's wife, Harry goes out of his way, even though he is on a mission, to find the truth. When he learns it wasn't true and that she just wanted adventure, Harry plans on surprising her romantically but things go awry when they are kidnapped. From there the movie enters awesome territory with constant explosions, epic gunfights and lots of badassness.
Despite my general dislike of James Cameron, he makes this movie awesome. The writing is perfect, the casting is amazing, Arnold gives a genuinely amazing performance, Jamie Lee Curtis is both funny and biting, and Art Malik is an amazing villain. Hell they even have Charlton Heston in it. You know a movie is good when it has him in it. Cameron also has great sense when it comes to making great action scenes. This is what I mean:

DAMN! All of the action is fast paced full of explosions, neck snaps, quick reloads and one liners in there to boot. And the truth scene is one of my all time favorite scenes because it shows just how awesome Arnold is.
Overall if you like well written, well acted, well directed action movies (which you should), Arnold Schwarzenegger, James Cameron or just movies that are fun to watch multiple times than pick this one up. Its an action masterpiece.
MY VERDICT: TOP FILM
Posted by xTJMac510x at 12:52 AM