"We can do this if we push ourselves and work around the clock" "I ALREADY WORK AROUND THE CLOCK!!!!" 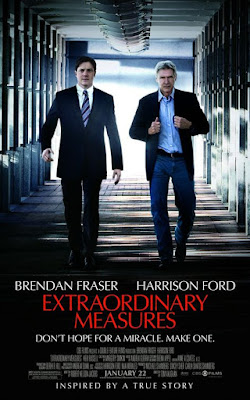 Hello I am the movie encyclopedia and if no one else will see it, I will.
To quote from my response to Fletch's TGITDNMAR: "Booooooooorrrrriiiiiiinnnnngggg." This was my response to Extraordinary Measures, a film inspired by a true story and created by CBS films. Why do I mention this? Rarely do I ever write off a movie completely. Even if the movie looks like total crap I will end up seeing it because of maybe one redeemable value. But when it came to this one I was totally not interested. But for some strange reason after seeing Legion I felt like I needed a movie that was a little more low key and less hectic. So I walked into Extraordinary Measures, one of 6 people in the whole theater and probably the only one under 60. Needless to say I was worried and not really expecting anything except a 100 minute time filler to keep me from total boredom at home. And another thing: the movie had made for TV written all over it. The trailers screamed overacting, Harrison Ford and Brendan Frasier looked washed up and monotone and it looked so predictably hokey and sappy that I thought it would be horrible...like I paid 9 bucks to watch something I could watch for free at home. So your probably wondering when I'm going to say BUUUTTT...fine I won't keep you in suspense any more.
The story of Extraordinary Measures is about John Crowley (Brendan Frasier) and Aileen Crowley (Keri Russel) who are a young couple with three kids, two of which have Pompe Disease (a disease that won't metabolize sugars in your body causing enlarged organs and muscle degeneration). The life expectancy of a kid with Pompe is about 9 usually; their kids are 6 and 8. After a scare involving their daughter, John seeks out an eccentric but brilliant professor named Robert Stonehill. Stonehill is considered ahead of the curve on finding a cure and John decides he will do whatever it takes, raise whatever money it takes, and talk to whoever it takes to find a cure.
Granted it is a pretty predictable story. If you've ever seen a PG drama or any non dark drama that involves sick people (especially kids) you know what happens. The movie is formulaic in ever sense of the word and a good portion of the film involves a lot of hokey dialogue pieces ("Is she gonna make it Doc? *takes off glasses* "I'm not sure but I'm trying!" kind of stuff) as well as plenty of needless filler describing the disease. Brendan Fraser, lazy eye and all, plays John as well as he can doing what he needs to do and using the right emotions when he needs to. Harrison Ford plays the same character that he has for years (gruff, tough but with a heart of gold) and surprisingly swears a lot more than I thought he would (PG people!). The other actors come off either haughty and pompous or overly sweet and doing everything to get a cry out of you.
SO WHERE'S THE POSITIVE? I'll tell you. I enjoyed this movie a lot. It was all of the negative mentioned in the past paragraphs and maybe even more but at the same time it kept my interest, proved its point without overstaying its welcomed, was sweet as apple pie and even got one tear out of me at the end. Is it an award winner or a game changer? No. But what it does do is provide a good, well written (albeit hokey) story with good characters (albeit overacting) and was much higher quality in terms of the overall finished product than any other made for TV movie I've seen.
Even if you've written this one off already...don't. It's a good drama that I don't regret seeing.
MY VERDICT: SEE IT
Posted by xTJMac510x at 11:01 PM